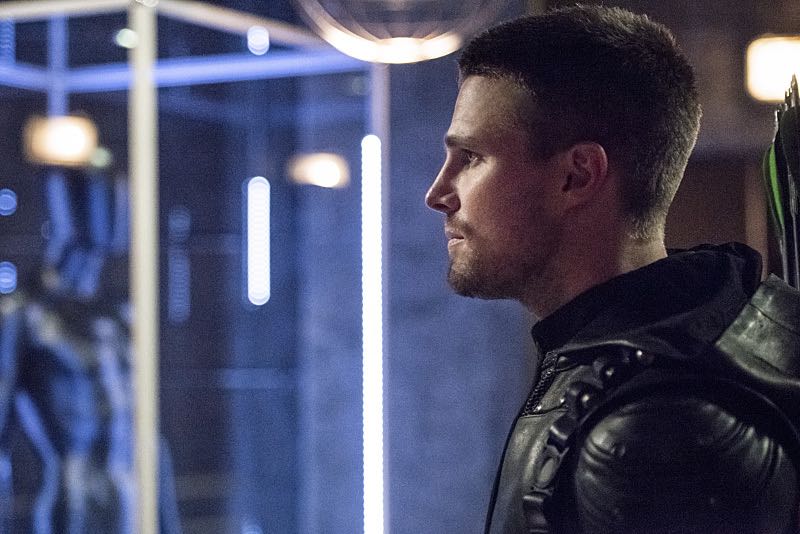 When we left the CW’s ARROW last spring, there was no more Arrow, with the city believing the ‘hero’ to be dead. It will come as no surprise, though, when the fourth season premiere, entitled “Green Arrow,” finds Oliver Queen (Stephen Amell) taking on a new persona after he is called back into action to handle a grave new threat to Star City.

Star City is in bad shape in “Green Arrow.” It’s suffered a lot these past few seasons, and a handful of do-gooders can only do so much. The place looks run down, citizens are moving out, and in general, it resembles Gotham before Batman arrives to clean it up.

Team Arrow is doing the best job they can without their leader. We see Diggle (David Ramsey), Black Canary (Katie Cassidy), and Speedy, who now wants to be called Red Arrow (Willa Holland), in action, and they handle themselves well. They are more than capable of dealing with run-of-the-mill villains.

But Damien Darhk (Neal McDonough, Captain America, Public Morals) is now in Star City, and he’s far more than run-of-the-mill. Damien calls upon mystical powers, and his team is so dedicated that they swallow a cyanide capsule the moment anyone from Team Arrow gets close. So it isn’t long before Laurel and Thea ask Oliver to come back and lend a hand, much to Diggle’s dismay.

It’s a little frustrating that Diggle hasn’t forgiven Oliver yet. After all, Lyla (Audrey Marie Anderson) has, and she was the one Oliver put in danger. Everyone else understands that Oliver did what he thought he had to do, and Diggle, being the first to come in on Oliver’s secret, knows him better than anyone. But their deep connection may be the very reason Diggle feels so betrayed, and it does seem authentic that “Green Arrow” does not find the former bodyguard forgiving Oliver. It will take more time.

Oliver himself isn’t too eager to jump back into action. Besides having to don a new suit and go by a new moniker, he’s enjoying his freakily domestic time away with Felicity (Emily Bett Rickards), whom he’d like to propose to, should they get a free minute. But she is ready to be back in action, having secretly been helping their friends, and I think her want to return is a big part of why he agrees to come back. He does delay proposing after her deception comes to light, but I think that’s only because he wants to stop Damien first, not because he’s getting cold feet. This couple has staying power.

Or do they? The end of “Green Arrow” sees Oliver and Barry (Grant Gustin) standing beside a grave, tears in Oliver’s eyes. This is a flash forward to six months in the future, so we won’t find out who is dead for awhile, but I hope it’s not Felicity. I also hope it’s not a minor character because it would be much more affecting to be one of ARROW’s core group and I feel like that needs to happen in order to raise the stakes. I’m sorry, I like Diggle a lot, but he’s my choice, given that Oliver has already lost all of his family but Thea, and the previous Canary also died, and Ollie shouldn’t have to lose his love so quickly. We’ll see, though.

Someone in serious danger right now is Quentin Lance (Paul Blackthorne). He doesn’t seem happy to be in an alliance with Damien, but in one he is, as “Green Arrow” reveals. I assume that’s the real reason Quentin isn’t assassinated, not because Laurel shows up to save him. How did Quentin get in this position and how he can get out remains to be seen, but at least this provides an opportunity for Oliver to rescue him and put their bad blood behind them. Maybe.

“Green Arrow” again flashes back five years. This time, we see Amanda Waller (Cynthia Addai-Robinson) kidnap Oliver and send him on an Argus mission. I still can’t wait for these flashbacks to end, but at least they are starting to seem more relevant as we move towards the pilot. Once those two timelines can be brought together, ARROW can reinvent itself into a better format. It’s a great show, but this element drags it down.