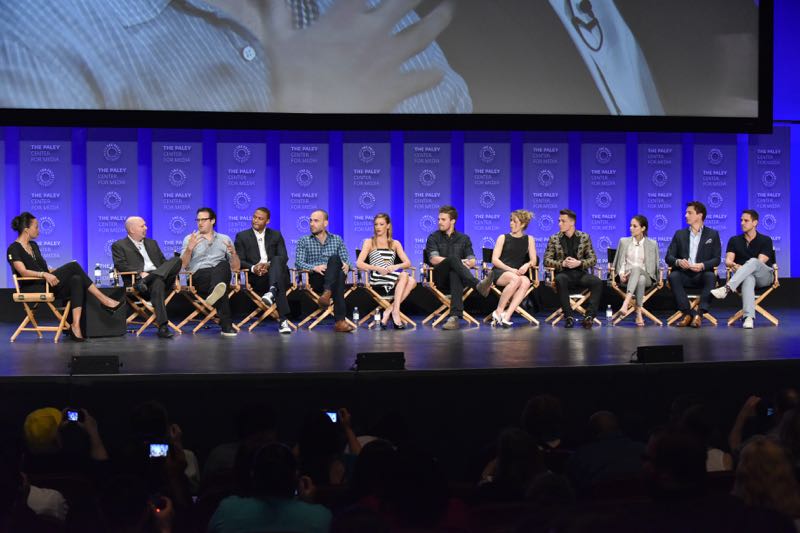 At PaleyFest 2015, in a paired-event that featured the CW’s hottest shows ARROW and THE FLASH, fans were in for double the fun as casts from both shows appeared to talk about their increasingly intertwined superhero worlds.

As viewers may recall, THE FLASH was born out of a special two-episode guest starring appearance by Grant Gustin as Barry Allen on the ARROW in its second season before launching into its own series THE FLASH starting this season.  Since then, there have been more than a few crossovers between the shows bridging both in a complex and intriguing mythology that now includes Metahumans.

As another special treat, there will be another big cross over coming up on THE FLASH this season as Detective Quentin Lance (Paul Blackthorne),  Laurel Lance (Katie Cassidy) and a few others make their way to Central City — Barry Allen’s (Grant Gustin) home turf.  As previewed in the special sizzle reel clip, when Cisco (Carlos Valdes) meets the Black Canary for the first time, he is so awed and stunned that he inadvertently blurts out: “I love you!” to her.  One can just imagine the reaction Laurel is going to have to that declaration.

Paul Blackthorne also teased that, after the death of his daughter Sara (Caity Lotz) and his subsequent fractured relationship with his other daughter Laurel, he perhaps has no friends left in Starling City and it forced him to venture out and make new friends in Central City, like fellow Detective Joe West (Jesse L. Martin).  But do not cry for poor Detective Lance, who Paul jokingly said has not gotten laid in 7 years, since co-star John Barrowman cheekily said that he (as John, not Malcolm Merlyn) would be happy to help him out with that.  Feeling more than a little frisky, John also added that he would be happy to fight Paul for the privilege of romancing Felicity’s mother Donna (Charlotte Ross) as she seems to be available and both Detective Lance and Malcolm could use a little more romance in their lives.  (Given how quick he was to volunteer, it is apparent that John, like Captain Jack Harkness, simply loves to pursue the most attractive people in the universe!)

Also looking to spice up his romance may be Oliver Queen as Stephen Amell said that when ARROW returns while Oliver will appear more introspective, vulnerable, and perhaps a bit defeated, and that after three years of pushing women out of his life and putting up emotional barriers, Oliver cannot sit looking out a window thinking about life for very long.  So when Oliver decides to finally join the land of the living, Felicity (Emily Bett Rickards) is undoubtably going to be the object of his affection — but, unfortunately, she may already be spoken for.  One can imagine that he is not going to take it kindly that Ray Palmer (Brandon Routh) poached his lady-love and there just may be a tug-of-war for Felicity’s heart coming up soon.

Setting things up already for Season 4, executive producer Andrew Kreisberg revealed that after the upcoming Season 3 finale of ARROW that the show will never be the same again.  That is not a good sign.  Whether that means a pivotal character will die or that a blossoming love is trampled forever, there are big things ahead for our heroes.  Just to ratchet up the suspense, John Barrowman said that since Malcolm Merlyn did something bad to Oliver that fans should just wait to see what results from that.  Willa Holland then teasingly said that things will get even more awkward between Thea (Willa Holland) and Malcolm, and that she might just have to kill him. So with a double bullseye on his back between Oliver and Thea, Malcolm’s days may finally be numbered.

Terrifyingly, it sounds like on both ARROW and THE FLASH everyone’s lives are going to be tossed into chaos and not necessarily for the better.  Here is what the casts of ARROW and THE FLASH had to share on the red carpet about what is upcoming on both shows:

Also revealed during THE FLASH panel was that time-travel will figure prominently in the next two new episodes, fans will finally find out where the ex-Mrs. Joe West is and what she has been up to, and that Iris (if and when she finds out) will react very negatively to being lied to by both her father and Barry about Barry’s abilities and alter-ego as The Flash.  Even more curious will be the teaser that co-star Carlos Valdes threw out that one or more of Barry’s team may develop their own special abilities.

Lest fans and viewers think that romance is on the back-burner on THE FLASH and ARROW, be reassured that Andrew Kreisberg, Emily Bett Rickards, Colton Haynes, Grant Gustin, Candice Patton, Danielle Panabaker and Carlos Valdes all had something to share about new romances on the horizon and whether existing pairings have a snowball’s chance in hell of making through the season.  Definitely keep an eye out for newcomer Lisa Snart (yes, related to Leonard Snart aka Captain Cold) who may be stirring up the blood and passion of one of the heroes on THE FLASH.

Good news for Malese Jow fans as both Andrew Kreisberg and Grant Gustin hinted that her story arc may continue beyond this season and into next season as the Barry/Linda romance may be around for awhile.

And before you think the villains have been ignored, fear not.  Not only is the Trickster (Mark Hamill) looming on the horizon, but a few more big and burly villains are coming soon to Central City and god knows whatever Malcolm Merlyn has brewing back in Starling City that is sure to foreshadow doom for anyone close to him as well.

To find out how things are going to play out for all our heroes and their destined nemeses, be sure to tune in for all new episodes of THE FLASH and ARROW starting this next week on Tuesday, March 17th and 18th at 8 pm on the CW.