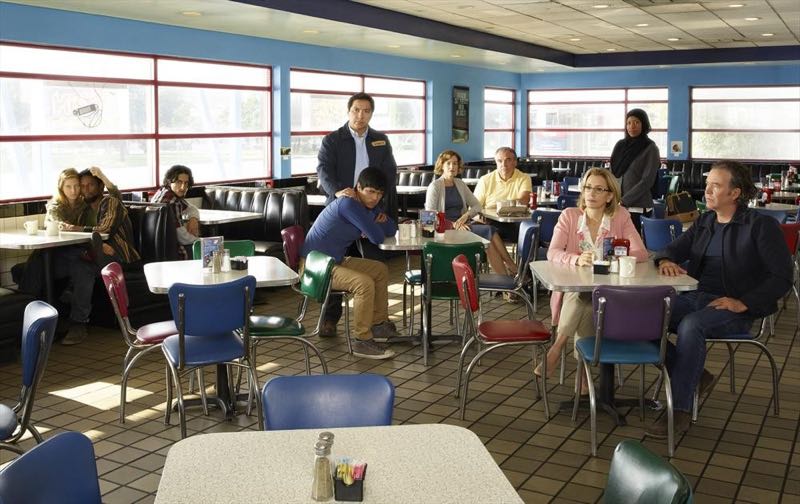 WARNING: The following review contains spoilers from the pilot of AMERICAN CRIME.

ABC’s AMERICAN CRIME feels more like a cable series than a broadcast one. In the first hour, it slowly begins unspooling a murder that involves drugs and racial bends, with a pretty strong ensemble of characters. From allowing the camera to linger on emotional moments, to the realistic way in which the characters interact, the quality in this drama is much higher than I’ve come to expect on ABC.

AMERICAN CRIME begins with Russ Skokie (Timothy Hutton, Leverage) getting called to California to identify his son’s body. Apparently, there was a home invasion in which Russ’ son was killed and from which his daughter-in-law remains in critical condition. Soon, the other parents, including Russ’ ex, Barb Hanlon (Felicity Huffman, Desperate Housewives), Tom Carlin (W. Earl Brown, True Detective), and Eve Carlin (Penelope Ann Miller, Mistresses), arrive. None know quite what to do, but all have their ideas.

I really like the way these varied people are shown. Russ has a major emotional breakdown in the bathroom, while Barb seems to barely bat an eye at the news. She does seem to care, wanting to keep the story in the press, but Tom fights her on that, preferring not to hear reporters talking about his daughter being sexually violated. It’s a tough situation and one can see that these four will not be seeing eye to eye, especially Russ and Barb, who split for a reason. Their interactions provide a level of authenticity to the piece.

But AMERICAN CRIME is not just about a bunch of white people mourning the death or injury of their children. Race plays a huge role in the proceedings, and the cast is diverse. We meet Tony Gutierrez (Johnny Ortiz, MacFarland, USA), a seemingly sweet and quiet kid who rebels a bit against his straight-laced, by-the-law father, Alonzo (Benito Martinez, House of Cards). There’s also druggie thug Hector Tontz (Richard Cabral, End of Watch) and addict couple Carter Nix (Elvis Nolasco, Oldboy) and Aubry Taylor (Caitlin Gerard, The Social Network), all of whom are involved in some way.

What this does is set up a number of individuals from different worlds that are all part of the same story. It is important that white, black, and Latino characters are included, but it’s equally important that these particular individuals fit in the way that they do. Several of the players could change skin tones and still be essentially the same person, but how they are treated by the police and court might change, and AMERICAN CRIME tries to touch upon all of these facets.

AMERICAN CRIME doesn’t seem the type of drama to just lay out a case in a straight forward manner, and it’s likely there will be more and more pieces of information that come out as things unfold, as happens throughout the first episode, though it’s more personal drama than mystery. It also doesn’t seek to deal with every issue it raises head on; instead, it tells a story and lets the viewer think for themselves a bit. Like its cable brethren, this is a complex plot, and prejudices will change the way different people view the series, rather than being hand-held and walked through from a strong perspective, as many TV series do.

In case you couldn’t tell, I like AMERICAN CRIME a lot. It doesn’t feel wholly fresh in the entire television landscape, but it marks a stark departure from the fare I’ve come to expect from ABC and its brethren. I hope it does well because the broadcast networks need to be encouraged into this kind of higher-level, less structured programming. If people watch it, ABC will take more chances, a necessary shift if the channel is going to survive much longer. And CBS, FOX, and NBC should and will take note. If no one tunes in, though, it’s likely we’ll continue to see business as usual from the Big Four, as they continue to see their ratings erode and slip into irreverence.