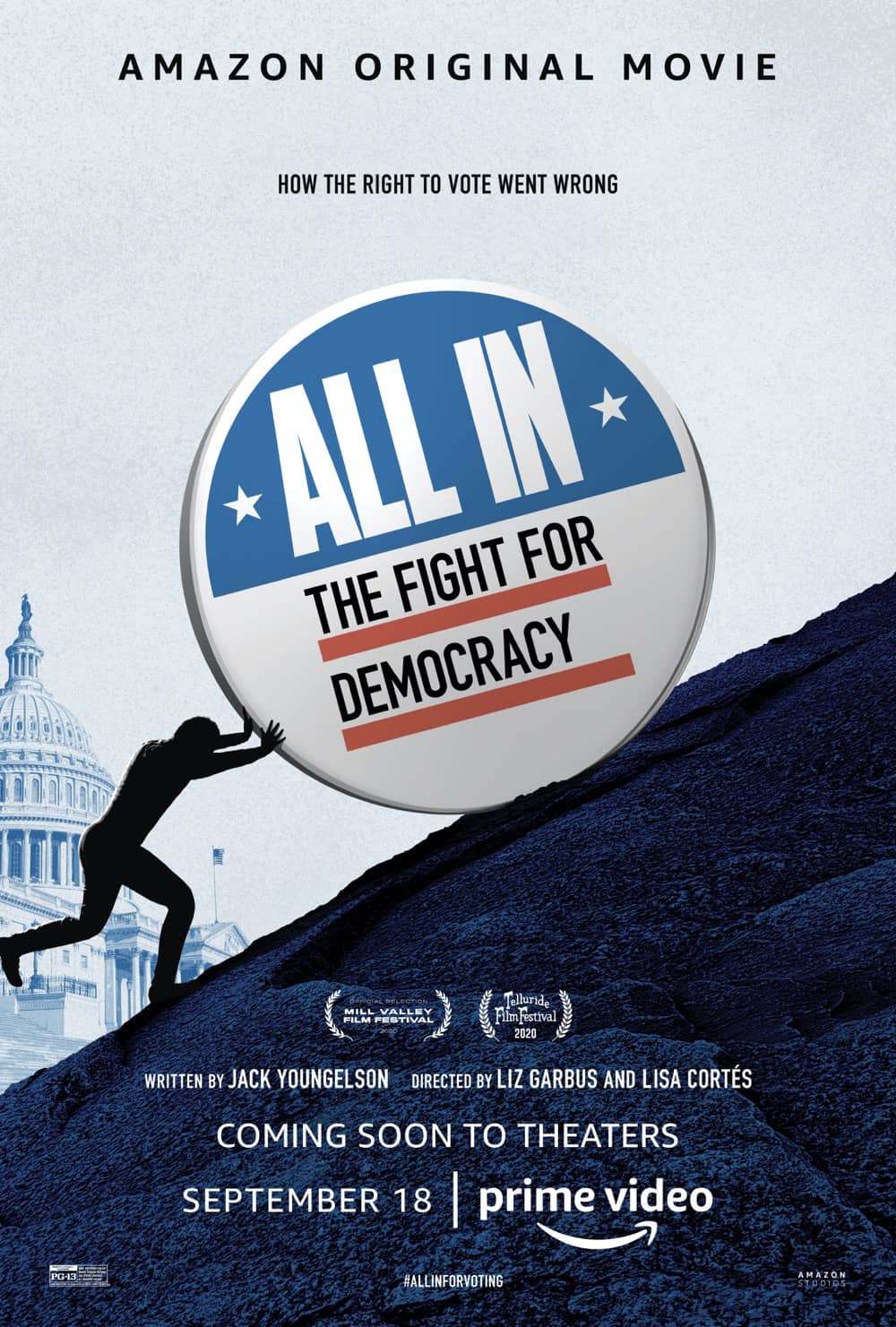 In support of National Voter Registration Day tomorrow (September 22), Prime Video will stream the Amazon Original movie All In: The Fight for Democracy featuring Stacey Abrams to audiences globally, without needing a Prime membership. The voting rights documentary will be in front of the Prime Video paywall for 24-hours, in effort to drive the urgency and importance of voter registration. The film will also be available on Twitch, YouTube and Twitter, making the film widely available and accessible to meet customers where they are across multiple platforms.

Also, on September 22, Twitter and Twitch will host watch parties where the film will be streaming on these platforms at no cost. The Twitter watch party will be hosted by Stacey Abrams and Lin-Manuel Miranda starting at 4:00pm PT at https://twitter.com/i/events/1305586144692727809, and the Twitch livestream will be hosted by social influencer Neeko on http://www.twitch.tv/neeko at 11:00am PT. All In: The Fight for Democracy will stream at no cost for 24-hours on Prime Video at https://www.amazon.com/dp/B08FRSNBLL, and at https://youtu.be/6h1-Ctbi8SM on YouTube.

In anticipation of the 2020 presidential election, All In: The Fight for Democracy examines the often overlooked, yet insidious issue of voter suppression in the United States. The film interweaves personal experiences with current activism and historical insight to expose a problem that has corrupted our democracy from the very beginning. With the perspective and expertise of Stacey Abrams, the former Minority Leader of the Georgia House of Representatives, the documentary offers an insider’s look into laws and barriers to voting that most people don’t even know are threats to their basic rights as citizens of the United States.

“Voting is fundamental for our country and democracy, and should be accessible and available to Americans everywhere. Today All In: The Fight for Democracy will be accessible on multiple platforms in support of voter awareness and registration for all Americans,” said Abrams.

As previously announced, the filmmakers with support from foundations, private funders, and Amazon Studios launched #AllInForVoting, a non-partisan social impact campaign aimed at educating and registering first-time voters, mobilizing communities to turn out to vote and training citizens to know their rights and report voter suppression. As part of the impact campaign, the 50 State Ambassador initiative brought together a team of influential actors, artists, musicians, athletes, and newsmakers to use their platforms to educate voters and mobilize participation in the upcoming national and regional elections. The Ambassadors include such notables as Taraji P. Henson, Connie Britton, Tyler Blackburn, Zooey Deschanel, Don Cheadle, Gabrielle Union, Seth MacFarlane, Padma Lakshmi, Melissa Ethridge, Zach LaVine, Viola Davis, Janelle Monáe and many more.

All In: The Fight for Democracy is directed by Oscar-nominated and Emmy-winning filmmaker Liz Garbus and Oscar-nominated and Emmy-winning filmmaker Lisa Cortés, and produced by Garbus, Cortés, Academy Award-winning producer Dan Cogan and Stacey Abrams. Amazon Studios acquired worldwide rights to All In: The Fight for Democracy from production company Story Syndicate.

About Prime Video
Prime Video offers customers a vast collection of TV shows, movies, and sport— all available to watch on hundreds of compatible devices.

Prime Video is just one of many benefits included with a Prime membership, along with fast free shipping on millions of items at Amazon.com, unlimited photo storage, exclusive deals and discounts, and access to ad-free music and Kindle ebooks. To sign-up or start a free trial of Amazon Prime visit: amazon.com/prime.