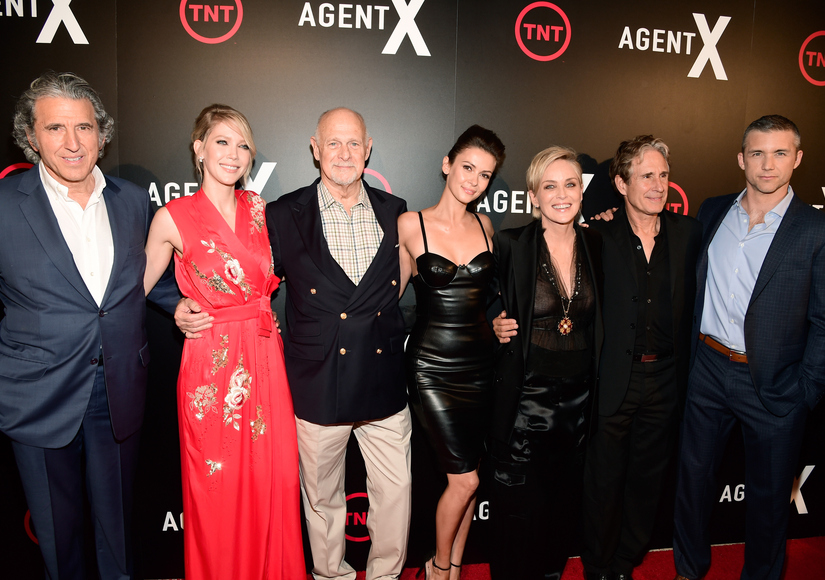 TNT is a network in the middle of a rebranding that began last year with the launch of dramas THE LAST SHIP and LEGENDS. However, the former home of FALLING SKIES is not happy with only putting out “serious” fare. With the launch of series like THE LIBRARIANS, it’s also clear the company has no interest in losing the audience that once came for shows like LEVERAGE, and it’s in that spirit we find ourselves bearing witness to the channel’s newest series, AGENT X.

Starring Sharon Stone and Jeff Hephner, AGENT X asks a question many have asked over the years: why does the second most important person in the executive branch have next to no real power? Well, according to the new William Blake Herron series, it’s because their power is hidden under lock & key (literally) in a secret provision in the original constitution stating the Vice President of The United States takes charge of an agent of unknown identity to help aid in times of dire peril. As one may imagine, this agent’s codename is none other than AGENT X.

At the red carpet premiere, we caught up some of the show’s cast, including stars Jeff Hephner, Gerald McRaney and John Shea, to talk action, history and more.

It looks like you’re doing a lot of your own stunt work in the show. Is that the case?
HEPHNER: I was, yes. Somebody puts a percentage on it that’s probably higher than it really is, but I do a whole hell of a lot of it. Yeah.

Were you prepared for how physical the role was going to be?
HEPHNER: I wasn’t at first, no. I mean, it was a grind and a half. Every free minute I had was rehearsing fights and constantly trying not to get hurt and not hurt somebody else.

And what excited you most about taking on the role?
HEPHNER: To get to be in an action show, you know? To go around beating up people I have no business beating up in real life.

Malcolm has a very clear love of American history. Do you share that love at all?
McRANEY: Yes, I’m just not as good at it, but I am a history buff.

Do you view Malcolm as a sort of father figure to AGENT X and the Vice President, a little bit?
McRANEY: Somewhat. I supposed there are times it would be a father figure, but most of the time he’s just the handler, the underboss, as it were.

Do you like the fact that you get to sit behind a desk and watch Jeff take all the hits?
McRANEY: I much prefer it that way. I do occasionally get involved as the season goes on, but I’m perfect content to sit back at the computer and let him do all the heavy lifting.

You’ve been working on a very wide range of roles recently, so why’d you pick AGENT X?
McRANEY: Because it was fun. It was gonna be a lark… and it is.

Do you like that pulp kind of thing?
McRANEY: Yeah, I do! I mean, this is reminiscent of the Bond series, things like that. It doesn’t take itself seriously, we’re having great fun, it’s a big adventure and I get to sit back and watch Jeff get his ass kicked ever week.

How much do you think Eckhart’s experience in working with AGENT X as Vice President plays into his actions as President?
SHEA: Well, look, he’s been the understudy for this role for eight years. He’s run the AGENT X program, he understand exactly what it entails, he knows all the dangers and all the pitfalls and so when he chooses [Natalie] to be his running mate and Vice President, he can pass the baton to here. But he knows he’s asking her to do a really difficult job.

Eckhart seems like a guy that really believes in the system. Do you view him that way?
SHEA: Well, look, he’s a military guy. The back story is that he served. He understands the military. He’s proud to be commander and chief. So he understands the need for a guy like John Case, an AGENT X, to defend against the other military black-ops people that our enemies have.

Last question: you did do Mutant X a long time ago, and now, recently, it was announced Fox is going to be doing two new X-Men shows. Would you ever want to explore stepping back into that world at all?
SHEA: Look, it was a fantastic thing to do. It was really fun for me. I had done the kind of action/adventure thing before on LOIS & CLARK, where I played Lex Luthor for Warner Bros., and I love that sci-fi world. But, I’ll tell you that the acting opportunities in the sci-fi world, where they’re fun, they’re not really what I’m born to do. I’m born to do stuff like this. I’m born to play serious, 1-on-1 scenes with a great actress like Sharon Stone, and I love every minute of it.

To see what AGENT X has to offer and the mysteries it unravels, be sure to tune in for the premiere on Sunday, November 8th at 9:00 p.m. on TNT.