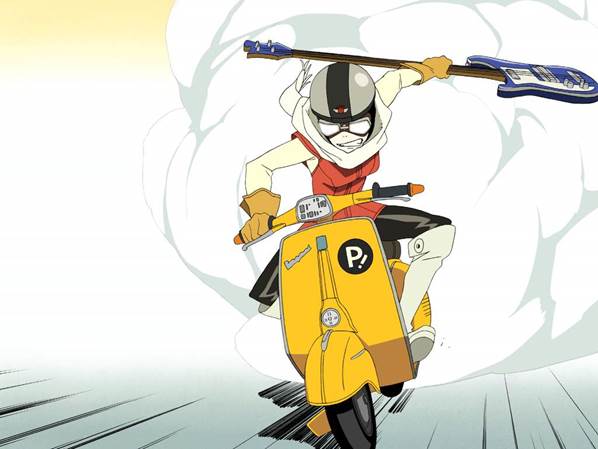 Adult Swim, a division of Turner, is proud to announce an official sequel to one of the most beloved anime series of all time – FLCL (pronounced Fooly Cooly). Created in 2000, FLCL told the tale of Naota, a 12-year-old boy who met a woman that would forever change his life…whether he liked it or not. 16 years later, Adult Swim and legendary animation studio, Production I.G (Ghost in the Shell), are creating two new six-episode seasons to continue the tale, which will premiere in Adult Swim’s Toonami block. Known for its surprising and unique content with high fan engagement, Adult Swim has been basic cable’s #1 Network in the U.S. with 18-24 and 18-34 year olds for eleven consecutive years. The new season of FLCL adds to Adult Swim’s ever expanding portfolio of original programming.

“The original FLCL is an anime classic and has been a fixture on Adult Swim since we first laid eyes on it,” said Jason DeMarco, senior vice president/creative director, Adult Swim On-Air. “I’m beyond thrilled to be able to produce a sequel with the original creators, for Toonami, where it belongs.”

Established in 1987, Production I.G has since produced a number of acclaimed feature films and TV shows, and has also partnered with Mamoru Oshii on every one of his animated films since Patlabor: The Movie (1989), thereby earning an international admiration which eventually led to the visionary collaboration with Quentin Tarantino for the animation sequence in his hit, Kill Bill: Vol. 1 (2003). They are most known for the Ghost in the Shell franchise, and for the acclaimed animated TV series Psycho-pass and Attack on Titan.

“FLCL has become an anime classic over the years, yet it has remained vibrant,” said Mitsuhisa Ishikawa, co-founder, president and CEO of Production I.G. “This new season will capture the hearts of both longtime FLCL fans from around the world and new anime viewers.”

In the new season of FLCL, many years have passed since Naota and Haruhara Haruko shared their adventure together. Meanwhile, the war between the two entities known as Medical Mechanica and Fraternity rages across the galaxy. Enter Hidomi, a young teenaged girl who believes there is nothing amazing to expect from her average life, until one day when a new teacher named Haruko arrives at her school. Soon enough, Medical Mechanica is attacking her town and Hidomi discovers a secret within her that could save everyone, a secret that only Haruko can unlock.

But why did Haruko return to Earth?
What happened to her Rickenbacker 4001 she left with Naota?
And where did the human-type robot ‘Canti’ go?

All of these questions and more will be answered in the new season of the series, which is set to premiere in late 2017/early 2018 on Adult Swim.