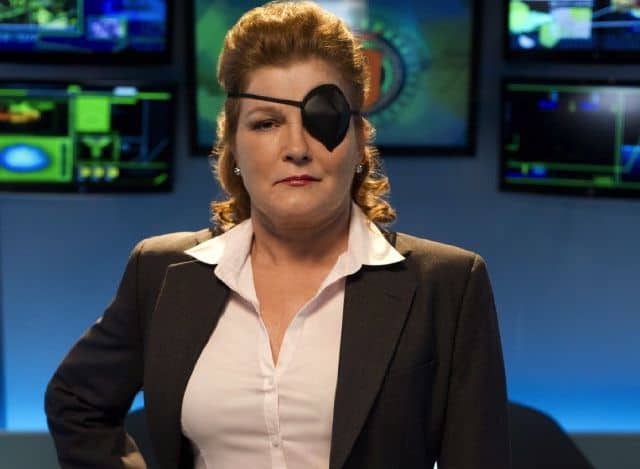 I was fortunate enough to speak with actress extraordinaire and nerd icon Kate Mulgrew about her work on Adult Swim’s NTSF:SD:SUV, the glory of bouffants, and whether she’ll return to WAREHOUSE 13 anytime soon. Behold the transcribed glory!

During the episode “Lights…Camera…Assassination” we found out a little more about Kove and her extra-curricular activities. Were you surprised to learn that Kove ran a very informative podcast?

[laughs] Was I surprised? I was delighted! [laughs] She’s a great movie buff now, you know – she knows everything about movies, she directs movies – the podcast is just the beginning. Kove is a complex, complicated woman with many gifts, many talents. The podcast I think is just one of many to come.

For these extra things that pop up, I know that when you get a script, there’s a certain amount of character work that goes into building something to play and this is sort of…a non-traditional format for that…

[laughs] Do you think?

Well, you know…[laughs] So how much do you bring to it and how much have you adjusted as you go through the second season?

You know, the funny thing about acting is, especially for television and film, is that what they really want is your personality. They just want to enhance it or shift it a little bit, adjust it a little bit, so Kove resides in me. [laughs] And I just have to bring her out like a little bird on a limb and let her dust off her feathers and be as insane as everyone else on that set. Paul Scheer and those guys are in the trade of lunacy. I’ve been a legit actress for almost 40 years and what I have to let go of is any idea, any scintilla of self-importance. Because it doesn’t exist in NTSF:SD:SUV.

Have you pitched anything that you would like Kove to do so far?

Then you get to wear multiple wedding outfits.

I can have lots of eye patches and hats and scarves – things are going to get really wildly interesting.

You can have a bedazzled eye patch and also perhaps a matching, bedazzled top hat.

I don’t know about the top hat because it might ruin my bouffant hairdo, which Kove goes to great lengths to keep that style. That’s very thought out on Kove’s part. She agonizes over this every morning as she does her entire ensemble, as you may note from my beautiful clothes.

The short-form format of these episodes – what are some of the challenges of filming something that goes by so quickly?

It doesn’t alter the fact that the discipline stays exactly the same, if not greater, because you have to be really prepared and on your game in shooting it quickly but intensely and intensively, and it’s over a six-week period. Those are ten, twelve hour days – a rigorous day but full of fun, highly collaborative…I would say it’s more fun than I’ve ever had in my career, certainly, and I attribute most of this to Paul Scheer and his munificence, his sense of joy, his sense of camaraderie – it’s just brilliant, he’s a terrific guy. The set is always tonally terrific and that’s why I think he’s attracted so many top talents to the format.

Yeah, I was going to say that I’m very impressed by how many really recognizable, really great guest stars they’ve managed to attract – and that fact that you’re in it is huge. Is there anybody that you would love to come and do a guest stint?

Well I had my darling Bob Picardo on and I’ve asked for John Delancie next season and I think he’ll come. Every time I ask for someone, Paul just picks up the phone and gets them because he just assumes that I know what I’m talking about and I haven’t let him down so far. I’ve only made a couple of pitches but, you know, Hollywood is just rich with great comedic talent. I have a lot of great friends who are very funny and Paul is nothing if not completely open to any suggestions so whatever we want – I’d like to bring all those guys from VOYAGER whom I had such laughter with on to it and let them cut loose.

As you mentioned before you’re best known as being a dramatic actress, have you gotten more comedic roles offered to you since the show began?

I think there’s more interest in me as a comedic actress, without question. And that’s an odd thing because Kove is really out there, do you know what I mean?

It’s a kind of dead-pan out-there-ness that…I don’t know, I can’t then become your typical comedian. It’s a different thing because I’m playing this very, very straight character in middle of madness. But there’s been a lot more attention, that’s true, now that I’m reflecting on it since it’s started, no question about it. Yeah.

You also are doing a guest role on WAREHOUSE 13. Is there any chance that you…?

I can go back there whenever I want to go back, I think. That too is another great set, generous, generous people – Jack Kenny is a great showrunner, Saul Rubinek is a very close, personal friend of mine and I love to go up, and I think I’ll go back up quite a few more times. If I can.

Yeah, I really enjoy your chemistry on both shows but on WAREHOUSE 13 it’s a different character in that you’re Pete’s mother, which was a great surprise, and your chemistry with everybody there is a great thing to watch.

Yeah, it was a good fit, it was a pretty instant fit too. That’s rare but I have the same thing on NTSF, love all those guys, too. If there’s one bad apple or if it’s chemically off with somebody, it can tip the entire thing and make it miserable and with both of them I have just been completely lucky.

Just because most people know you as Captain Janeway and love you because of that, and also with the Mars Rover project it’s been a more exciting time for space exploration than it’s been in years. Do you ever have military personnel or scientists, especially female, and say that you’re their inspiration to go into a field that tends to be male dominated?

All the time. I respond with instant, visceral gratification because surely you can understand that can be no greater reward as an actress than to have inspired something meaningful in the world. So I’m always incredibly humbled and deeply delighted by that.