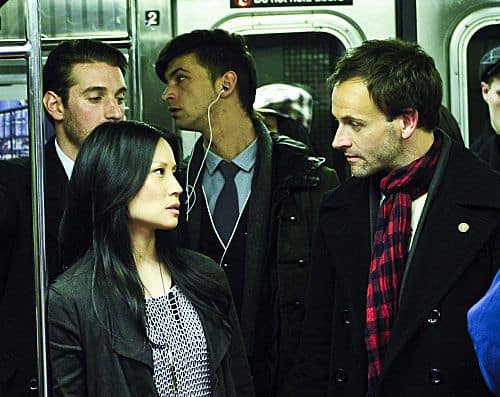 CBS is known for its crime procedurals. The newest has a twist, and that’s that it’s based on something old, yet still feels current. Called ELEMENTARY, the new show joins British television and Hollywood in the current trend of bringing Sherlock Holmes back to life on screen. This character may be a born-again fad, but each incarnation is different, and, good or bad, ELEMENTARY isn’t really like either of its brethren.

CBS’s incarnation stars Jonny Lee Miller (Eli Stone, Dexter) as the infamous detective. Miller’s Sherlock has recently come off of an obsession with drugs. He now lives in New York City, helping out his old friend on the police force, Captain Tobias Gregson (Aidan Quinn, Prime Suspect), who did a stint in Scotland Yard, with the difficult cases. Sherlock is slightly insane, but brilliant, able to put together complex puzzles fromh the smallest clues, and is an excellent judge of character. He may hate himself, but he also knows himself, which is why he is able to shake his drug habit.

Sherlock’s father isn’t so certain about this stability so he hires Dr. Joan Watson (Lucy Liu, Kill Bill, Southland) to stay with Sherlock for six weeks. Watson is a former surgeon who is haunted by the demons of her past and isn’t too pleased with her current career. This sets the stage beautifully for her to stick with Sherlock, since she can actually seem to stand him, and provides a good balance for his maniacal ways.

One’s thoughts when seeing a female Watson immediately jump to romance between the central duo. ELEMENTARY has vowed not to go there, and in keeping with their word, there is no sexual chemistry between the pair in the “Pilot” episode. When Sherlock says sweet words to Watson during their first meeting, they do not feel natural, which is good, because they aren’t. For the rest of the first hour, lots is done to establish their relationship with one another, but there are no longing glances or innuendo. This is a professional arrangement, and Sherlock gives us plenty of reasons to dislike him, which Watson, in living and working with him, likely experiences doubly so.

It’s a little odd that ELEMENTARY chooses to be set in the Big Apple, rather than London. Is this done purely to set itself apart from previous incarnations, or just to appeal to American audiences? Whatever the reason, Sherlock himself has a distinctly British feel, and not just because of the accent, which influences the tone of everything around him. New York-flavor is lacking in the series, which makes the decision to switch cities a little puzzling, since it’s done only half-heartedly.

The worst thing ELEMENTARY has going for it, though, is its home on CBS. Sherlock is known to solve case after case, so it isn’t out of character to place him in a procedural. The issue here is that ELEMENTARY does bend to fit the identity of the network. This mean that, rather than the puzzling enigmas that Sherlock has to sort out, he is being given much more pedestrian murders that can be neatly wrapped up in an hour. It should be a natural fit, making a CBS drama around Sherlock Holmes, but it also waters down the character to a distasteful blandness.

Any flaw in Sherlock cannot be blamed on Miller. He has an edgy insanity that overflows with essence. He is a compelling actor, and has a definite perspective that works on the iconic character. He could easily take his Sherlock to new heights, if he is ever allowed to on this show, which he probably won’t be.

Quinn and Liu are much more flat, and almost have to be in the face of such a strong personality. Liu does the best she can with Watson’s back story, which has been developed a bit more than in most incarnations, really giving some heft as to why she is no longer a surgeon. She just lacks the second banana feeling that makes a good Watson work. It’s almost like the show did too good a job casting Watson, guaranteeing that she will be played more deep and serious than one might expect. And, to be honest, the pairing just isn’t the same when it’s not two guys.

So is ELEMENTARY worth watching? Yes, for now. Miller gives a performance that must be seen. If the stories become repetitive throughout the season, there is plenty of time to tune out later. For now, I just want to see what the main actor’s will and energy can do to a relatively mediocre attempt at the Sherlock Holmes tale. Who knows? If he is allowed a little freedom, it could turn into something magical.