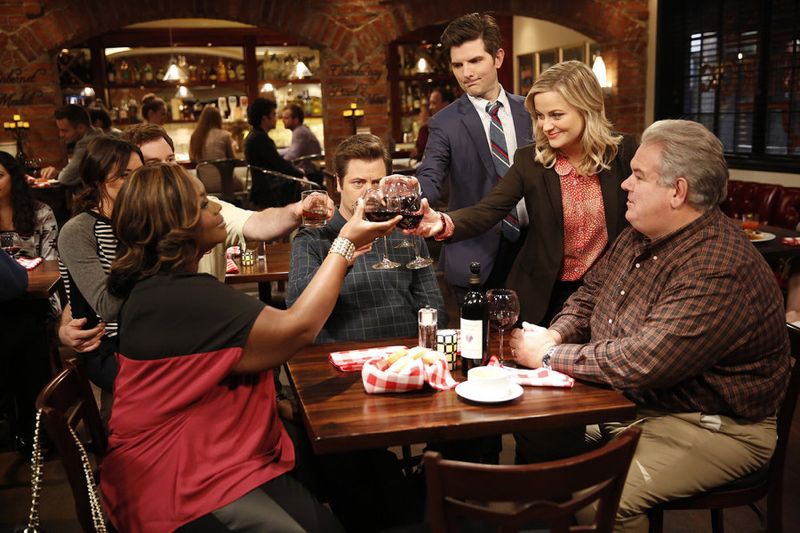 After seven seasons of comedy greatness, Parks and Recreation is coming to an end this Tuesday, February 23rd with a one-hour series finale at 8/7c on NBC. During its time on air, Parks & Rec gave us a multitude of gifts: “treat yo self,” Galentine’s Day, the best platonic friendship on TV in Ron and Leslie, and the many weird and wonderful citizens of Pawnee, Indiana. After years of weddings, bonding over breakfast food, hilarious small town meetings and superb growth arcs for every member of the cast, picking the 10 “best” episodes to spotlight would impossible (season three was basically a flawless season of television just by itself), so I’m not going try to pick the best episodes. Instead I’m just going to invite you to stroll down memory lane with me through a park Leslie and her team built as we look back on 10(ish) unforgettable episodes that made Parks & Rec such a wonderful world to visit every week.

If Parks and Rec had signed off with the triumphant season four finale that found Leslie Knope winning a seat on Pawnee’s City Council with a killer speech about her love for the town, we would have missed some great stuff, but no one could argue it wouldn’t have been a fitting and rewarding end to Leslie’s journey. The moment Leslie fulfills her lifelong dream of walking into a voting booth and voting for herself is so immensely gratifying for her and the audience, it is nearly impossible not to shed a few tears.

When the flu sweeps through the parks department, hilarious things happen like Chris demanding his body to stop pooping and Leslie devolving into a babbling, delirious mess in search of her imaginary tiara. While “Flu Season” is possibly the funniest episode of the entire series, its best moment comes at the end when Leslie pulls herself together enough to pitch the Harvest Festival to the Pawnee Chamber of Commerce. A clearly smitten Ben says it best: “That was amazing. That was a flu-ridden Michael Jordan at the ’97 NBC Finals. That was Kirk Gibson hobbling up to the plate and hitting a homer off of Dennis Eckersley. That was… that was Leslie Knope.”

There have been many memorable weddings on the series, but none were as unexpectedly moving as Andy and April’s impromptu nuptials. Not only was the episode a romantic showstopper for the show’s most enduring couple, it also contains one of April and Leslie’s sweetest subplots as Leslie struggles to get onboard with April’s decision to marry Andy after just three weeks of dating. Between the adorable Andy and Aprilness of the proceedings, the April/Leslie bonding and a cold open which featured Ron freaking out the entire department by appearing to pull out his own tooth, “Andy & April’s Fancy Party” is a true classic.

Leslie and Ron’s unlikely friendship seemed poised to endure anything until the series jumped three years in the future to find the duo no longer speaking to one another. A world where Leslie and Ron were no longer friends was a world no one wanted to live in though, so the rest of the gang locked Leslie and Ron into their old office for a night to work out their differences. The results were at once hilarious (see Leslie’s stirring rendition of “We Didn’t Start the Fire”) and bittersweet as we learned Ron left the parks department to start his own company after Leslie stood him up for lunch and he realized all of his friends had moved on without him. This late series entry packs a powerful punch thanks to the rich history between the two powerhouse characters at its center.

Has anything ever been as spectacular as Nick Offerman and Megan Mullally’s go for broke performances as Ron and Tammy in “Ron & Tammy: Part Two”? The real life married couple gave us a taste of Ron and Tammy Two’s bad romance in season two, but it wasn’t until they landed in jail for a drunken night of sexcapades that we saw the full extent of what they could do together. The unholy union also gave us a terrific Ron/Tom subplot as poor Tom gets himself sucked into Tammy’s orbit in an attempt to make Ron pay for dating his ex-wife.

Like so many of the greatest Parks & Rec episodes, “End of the World” is an ensemble piece. Taking place over what the citizens of Pawnee believe may be their last day on earth (hearkening back to the city’s past as home to a cult compound), the parks department all take the night to reflect on their lives. The results vary from character to character as Tom tries to throw the biggest bash possible, Chris becomes melancholy and Andy and April drive to the Grand Canyon as they tick off the last box on Andy’s bucket list.

Season two has its share of memorable episodes, but only one of them features Ron getting shot in the head. This episode was one of the first that truly showcased the entire cast’s range. We get a furious Ron, Leslie at her feminist best as she hangs with the guys and totally plays a chauvinistic park ranger and Tom in full-blown panic mode. Meanwhile, back at the office, Andy and April engage in the kind of playful bonding that would become the hallmark of their role-playing, adventurous relationship.

“The Fight, ” aka the one where everyone gets drunk, is a masterpiece for the series of increasingly bizarre talking heads alone. The potent Snake Juice turns the normally stoic Ron into a dancing machine, unleashes Bert Macklin and Janet Snakehole on Tom’s club and ends with the entire Parks Department crammed into Donna’s car. “The Fight” wasn’t just an excuse to get Leslie and friends plastered (okay, maybe it was), it also addressed the growing distance between bffs Leslie and Ann, ultimately allowing them to work out their issues in a way that was instantly relatable to anyone who has ever had a best friend.

Yes, I’m cheating, but to leave off the introduction to Lil’ Sebastian or Treat Yo Self would be sacrilege. “Harvest Festival” was the brilliant culmination of the tight seven episode arc that kicked off season three, while “Pawnee Rangers” gave us a classic Ron/Leslie story and Donna and Tom’s favorite day of the year (plus Ben as Batman).

The minute Ben Wyatt arrived on the scene, it was clear he was Leslie Knope’s guy, and three seasons later they tied the knot in true Leslie and Ben fashion. We were given so many gifts in this episode, including Ron walking Leslie down the “aisle” of the parks department and the gang making Leslie a wedding dress out of all of her accomplishments, but the greatest gift of all came in Ben and Leslie’s wedding vows. “I like you and I love.” Not only was it a heart melting moment, it was a perfect summation of how fans feel about Parks & Rec.