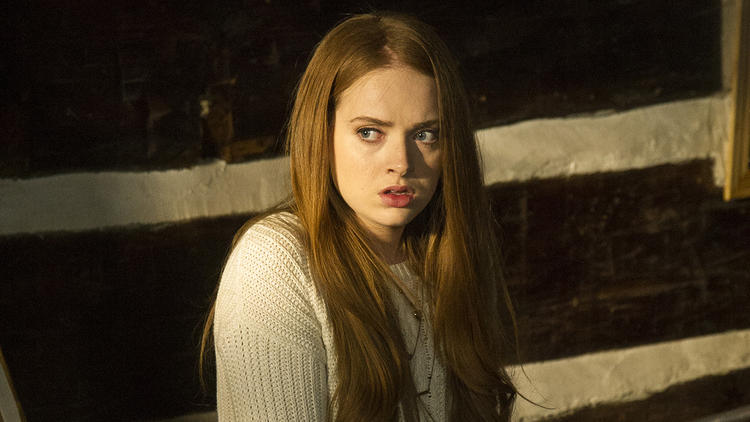 Fans of BBC America’s hit series Orphan Black will instantly recognize Zoé De Grand Maison from her role as the fascinatingly unstable Gracie, but on Saturday, February 20, De Grand Maison is taking on a new role in Lifetime’s latest thriller, Pregnant at 17. De Grand Maison stars as Chelsea, a free-spirited 17-year-old whose relationship with a married man quickly sours, leaving her with no one to depend on but the man’s wife, Sonia (Josie Bissett). In true Lifetime movie fashion, the two women’s lives only get crazier from there.

De Grand Maison recently chatted with Seat42F about the ins and outs of starring in a Lifetime film, Orphan Black, and more.

What can you tell me about your character Chelsea?

De Grand Maison: She’s a very smart girl, and a lot of fun to play. She’s mostly just a normal 17-year-old girl who finds herself in a rough situation because she made a mistake. The movie is about her dealing with that mistake and trying to figure out what the right solution for her is.

A strong bond develops between Chelsea and her lover’s wife, Sonia. How did you feel about that relationship and the way it drives the story?

De Grand Maison: It’s a huge part of the story. It’s a very unexpected relationship and I feel like people find out why when they watch the film. They end up becoming very close and I think Sonia really helps Chelsea cope with her situation and figure out how to handle it. She ends up making the right decision for her, and Sonia helps her out along the way. Sonia is kind of like a mother figure for Chelsea throughout the movie, which is great.

Is there a moment or scene in the movie that stands out for you more than the others?

De Grand Maison: It’s not necessarily a moment, but as we mentioned, I think the relationship between Chelsea and Sonia is really special. It’s really beautiful and the evolution of that throughout the movie is one of my favorite parts of it.

What is the most interesting part of working on a Lifetime movie?

It’s very fast-paced. You have to stay on top of things, and make sure you know your lines when you go on set. It’s long because some days you go to set and you are in every scene, and then you go home and you have 12 hours to eat and sleep and learn your lines for the next day. It can be pretty hectic, but it is so much fun it doesn’t feel like work. I feel so grateful to be able to do this as a job.

You are so amazing as Gracie on Orphan Black. Will you be back this season?

De Grand Maison: I can’t confirm or deny at this point, unfortunately.

What do you enjoy the most about playing Gracie?

De Grand Maison: She is so much fun to play because she is so different from who I am in person – at least I like to think so. She’s very dark and her way of thinking is so different because she was brought up in such a weird environment and other people’s beliefs were always thrust upon her.

There’s so much going on in her head and she kind of breaks out into the real world, and everything is still new to her. It’s like getting into a completely different person’s brain, and it is so much fun, I love it. It is the most rewarding feeling as an actor to get to play somebody who is so different from who you are as a person.

De Grand Maison: It’s amazing. She’s fantastic, she’s so talented, and she’s also just such a sweet, sweet person. I did an interview last summer and I was talking about shooting scenes with Cosima the first time, and I hadn’t seen her as Cosima before so I almost introduced myself to her, even though I’ve known her for two years because she was like a completely different person.

She is so good at playing each character, and embodying them, so for a minute I was like, “I need to go introduce myself,” but I stopped before I embarrassed myself. It’s so much fun, and she makes acting off of her so effortless because she is so invested in the scene.

Do you have a favorite Orphan Black set story?

That was a really late shoot and we were all really exhausted. We were just laughing at everything. It sounds weird, but to just be so exhausted that everything is hilarious and you can’t think straight, but everyone is on the same boat is a good time. It’s always such a pleasure to work with these people, that to be in it together when you’re all exhausted and nothing is making sense is a lot of fun.

If you could be on any TV show, past or present, what show would it be and why?

De Grand Maison: I loved Breaking Bad. It was such a fun show. It was such a unique storyline and I’ve never seen audiences so invested in a TV show like that before. It was just one that everybody really cared about. It was so believable. The acting was fantastic and the writing was fantastic and it lasted the perfect amount of time. It really changed the way people were watching TV, so a show like that would have been lots of fun.

Pregnant at 17 premieres Saturday, February 20 at 8 P.M. on Lifetime.