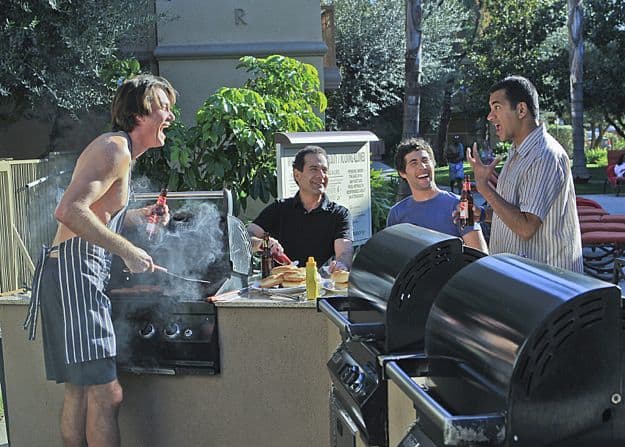 CBS’s WE ARE MEN is sort of like Sex and the City with guys. Four buddies meet in an apartment complex inhabited by divorced men and wannabe actresses, stick together, and offer emotional support through a tough time. They still act like boys, not girls, but the camaraderie and their various romantic partners certainly evoke the comparison.

As the show begins, Carter (Chris Smith, Paranormal Activity 3) is at the altar with his bride, Sara (Fiona Gubelmann, Wilfred). A man runs in before they say “I do,” and Sara runs off with him, leaving Carter broken and sad. That’s when Carter moves into the apartment and meets the others.

It’s not the most original start. After all, Rachel ran away from her wedding at the start of Friends, and Alex left Dave at the altar in the Happy Endings premiere. But it serves its purpose, putting Carter in the right situation to get the premise rolling, and the way that WE ARE MEN’s “Pilot” comes back around at the end of the half hour makes the whole thing mostly worth it, even if it does seem familiar. Plus, a small guest appearance by Alan Ruck (Spin City) is a great feather in one’s cap in any installment, let alone at the beginning, and as a priest to boot!

Carter soon meets three neighbors who have also not been able to make marriage work for them. There’s Gil (Kal Penn, House), a guy who picked the worst mistress ever, Stuart (Jerry O’Connell, Jerry Maguire), whose first wife is now his second wife’s divorce attorney, and Frank (Tony Shaloub, Monk), whose many brides tend to stay the same age, even as he grows older, and is currently into Asians. They instantly take Carter under their wing, and their little club is born.

Smith may not be well known, but Penn, O’Connell, and Shaloub are. Their names alone are enough to garner at least two episode watches, and the chemistry they have here is fantastic. They really do feel like a bunch of buddies, regular guys, each selfish in their own wants and needs, but willing to offer a helping hand when they aren’t too focused on their next lay. They razz one another, but they care, which is proven by the end of the “Pilot.”

Now, yes, the dynamic comes together a little too fast. Two months pass during the “Pilot,” but it doesn’t feel like that, with everything moving so quickly. Even though the other three guys’ friendship with each other feels authentic, it does seem a little too soon for Carter to be part of the group in any meaningful way.

However, the show is funny, and it has charm. I really enjoyed watching the men hang out and get into trouble, and there’s a certain bit of fantasy in four guys with their own closely-located apartments, doing whatever they want without anyone bringing them down or trying to control them. There’s also a “glad that’s not me” component, sure to add emotion into characters, who clearly are not well-skilled at showing their feelings, especially when negative ones threaten to overwhelm them. It should be a good combination.

The list of recurring actors already involved is impressive. Besides Gubelmann, whom we’ll surely see again, and Ruck, which I certainly hope for a repeat visit from, Romy Rosemont (Glee) and Dave Foley (The Kids in the Hall) show up as Carter’s parents. If this is the kind of talent that wants to be involved in WE ARE MEN, than it is a promising sitcom indeed.

This “Pilot” does have its issues. The plot seems a little like fluff, there isn’t a clear direction for the story, and Carter’s inevitable romance sometime this season with Frank’s daughter, Abby (Rebecca Breeds, Home and Away), is predictable and groan-inducing. But there are some genuinely funny bits and the central quartet is strong, so it definitely has the potential to be pretty decent. It at least ranks in the middle of the pack of this year’s freshman comedies.