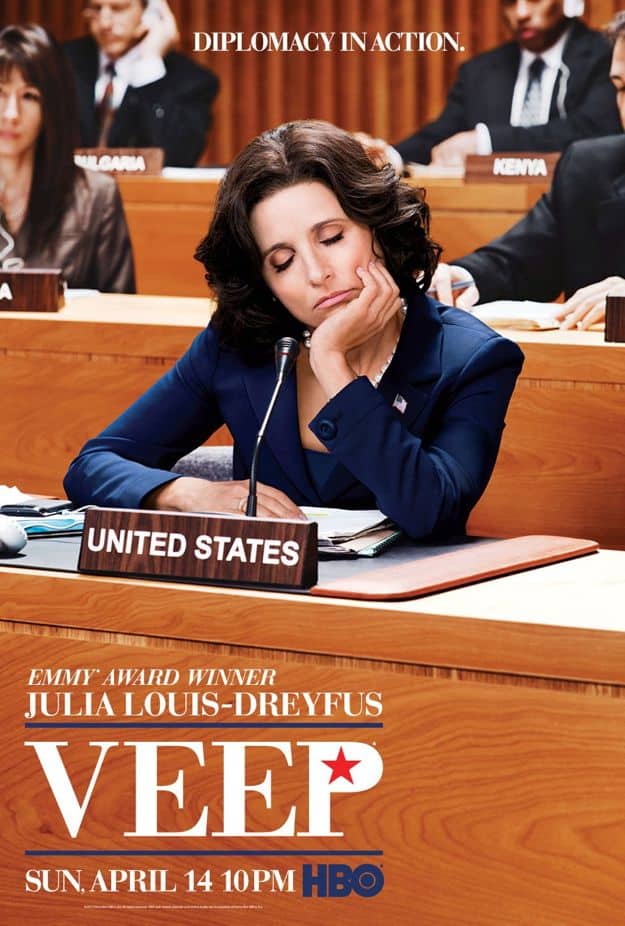 HBO’s VEEP is back for a second season just in time for “Midterms.” Selina (Julia Louis-Dreyfus) and staff anxiously await the results of their party’s fate as the votes are counted for Congressional seats. Selina looks for a way to use the numbers to her advantage to gain more power on the Hill, while others hope to thwart her, in a way, although, as usual, Selina’s own worst enemy is herself.

There are so many fantastic elements to “Midterms” that it’s hard to figure out where to start. VEEP, which is a little rocky in season one, definitely seems to understand itself by the second year. Not only do all of the main players get perfect little bits this week, but there’s room to bring in a wealth of fantastic guest stars, all pulling their own weight.

Among the new characters we are introduced to are: an important member of the President’s staff (Kevin Dunn, Luck, Samantha Who?); a numbers cruncher who has returned to help the President rebound from his big losses (Gary Cole, Office Space, The Good Wife); and a percentage-obsessed nerd (Kumail Nanjiani, Franklin & Bash, Portlandia). Plus, we get the return of Ohio’s Roger Furlong (Dan Bakkedahl, Legit), who has never liked Selina, and never will.

I guess what is surprising is that Dunn and Cole’s characters don’t hate Selina. Selina still manages to offend Cole’s guy, but neither are actively trying to see her fail. They may work for the President, but unlike the President’s liaison with his veep’s office, Jonah (Timothy Simons), the whole White House camp isn’t against Selina.

Which proves what some have suspected, that Jonah is just a jerk. Yes, the President frequently blows Selina off, but Jonah’s dismissive attitude isn’t true of everyone in his office. It’s a power play by someone who wants to take advantage of every ounce of influence they are given, and he isn’t given much. Some people like and respect Selina, which is probably why she’s been around as long as she has.

Between the core cast, which is, without exception, phenomenal at this distinct type of groaning humor, and these guest stars, VEEP soars. It’s hard to define exactly why I am enjoying the show so much, but every single actor on screen just nails their roles. Their line delivery is flawless, the writing is tight, and the show knows exactly what it is, with no wavering in tone or presentation.

A look around at the ensemble supports this conclusion, each with their own bits in “Midterms.” Amy (Anna Chlumsky) balances a dying father with her professional responsibilities. Dan (Reid Scott) fights with Furlong. Sue (Sufe Bradshaw) lays the smack down. Mike (Matt Walsh) tries to unload a leaky boat he foolishly bought. And Gary (Tony Hale) not only has a lipstick emergency, but is part of the biggest kerfuffle in the entire half hour, which hilariously unfolds in the Oval Office itself.

I am somehow not disappointed that the President has yet to make an appearance, even in an installment where he is frequently known to be just around the corner. I feel like the idea of him, painted in the small details we get from other characters, is greater than any actor could actually perform the role. Should VEEP decide down the line to bring in the POTUS himself, it would take absolutely perfect casting to nail the role. Instead, I feel he is better off remaining a legend and a myth, only talked about, never seen, his absence always making Selina seem less important than her job title would lead one to believe.

In the end, Selina actually does get what she is asking for in “Midterms,” or at least part of it. And as fans might expect, it’s not what she bargained for. The President actually calls for her (which NEVER happens), but to ask her to do some difficult stuff, some of which involves shouldering part of the blame for awful midterm elections, which really aren’t her fault.

Louis-Dreyfus is brilliant, making this unlikable woman just a smidge charming enough that viewers can understand how she got where she is. She isn’t nice and she isn’t sharp, well, not entirely, yet she worked her way up to V.P. somehow. It actually makes sense almost solely because of Louis-Dreyfus’s nuanced and carefully thought out portrayal.

And she is matched by everyone else on screen. It’s her show, but it wouldn’t work without the right balance of support the others bring, keeping her the star and the focus, even while servicing their own stories. Excellent work, all around.

If you only sort of enjoyed season one, “Midterms” is worth a shot because I feel the game has been kicked up a notch. If you’re already a fan, this is VEEP at the top of its game, and you should be very satisfied with its return. And if you’ve never watched the show, give it a try. “Midterms” is accessible to anyone, even the brand-new watcher.