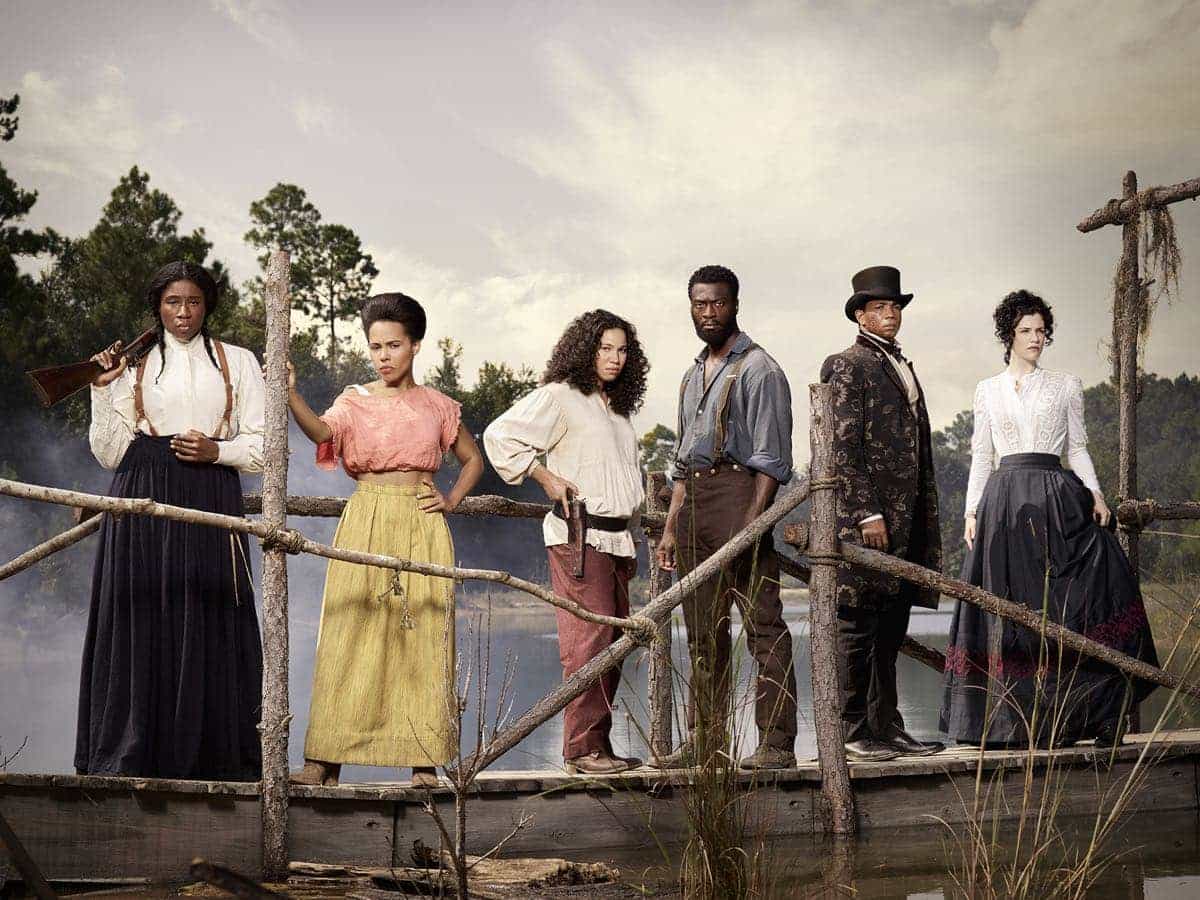 WGN America’s UNDERGROUND begins its second season this week. Starting about five months after the freshman run’s finale, we quickly pick up the stories of most of our characters, more or less where we left them. Time has passed, but it’s been relatively uneventful. Something tells me, after watching the first episode, that that won’t be the case for very much longer.

UNDERGROUND is interesting to me because it’s not obvious at first who the leads are in the first year. There is a large ensemble full of talented performers, and while many of them are removed as the story progresses, there are still more important roles than the five who are listed as the primary cast, which includes only Rosalee (Jurnee Smollett-Bell), Noah (Aldis Hodge), Elizabeth (Jessica De Gouw), Cato (Alano Miller), and August (Christopher Meloni).

Thankfully, the show has been successful enough to expand that ensemble in season two. The most important of the four new leads is Ernestine (Amirah Vann), Rosalee’s mother, who always had her own plot arc, but now is officially among the principal players. UNDERGROUND season two has also added characters named Georgia (Jasika Nicole, Fringe), Clara (DeWanda Wise, Shots Fired), and Harriet (Aisha Hinds, Under the Dome, If I Stay).

Harriet, as in Harriet Tubman. Clearly a recast from the brief shot of the legendary figure from last year’s finale, it’s kind of cool that she is now part of the group. Previously, I’d worried that adding someone with such name recognition might distract from the core narrative. However, after checking out the start of season two, I don’t think that will be the case.

UNDERGROUND remains focused on the stories of the characters from year one. While Rosalee, Noah, and Elizabeth were just dipping their toe into the secret movement to free the slaves, they’re now larger players in the game, so it makes sense they’d come across Harriet. Harriet doesn’t get any more precedence than the others, less than the returning main players, so she’s an interesting element that signals our players have gotten deeper into the action, rather than a shift to a new direction.

We’ve also got some new locations. Most notably, Ernestine has left Macon Plantation and is (sort of) settling into a very different type of community. Between that and the scenes in Ohio and Canada, we begin to get a fuller picture of different parts of the United States, all of which were affected by the slave industry and those who opposed it.

There are some terrific surprises, too. As with the first year, audiences may think they know where things are heading, only to have the rug yanked out from under them by the unexpected. This is a sign of good storytelling, and an example of how UNDERGROUND roots itself in reality. While there are some fantastical coincidences and run-ins, for the most part the series keeps viewers on their toes in an authentic manner, and there’s at least one big twist in the initial return that leaves me wanting to jump right into the next episode.

Not everyone you expect to see is in the second year’s premiere. There is a lot going on in UNDERGROUND, so it doesn’t feel empty that some faces may have to wait a week for us to catch up with them. Instead, it’s a busy, satisfying hour, and I’d rather a few people take this installment off than force hokey subplots to include them.

In all, I’d rate the premiere pretty high, accomplishing what it needs to accomplish, building the established world larger, and still maintain the things that makes this show compelling. UNDERGROUND returns Wednesday at 10/9c on WGN America.