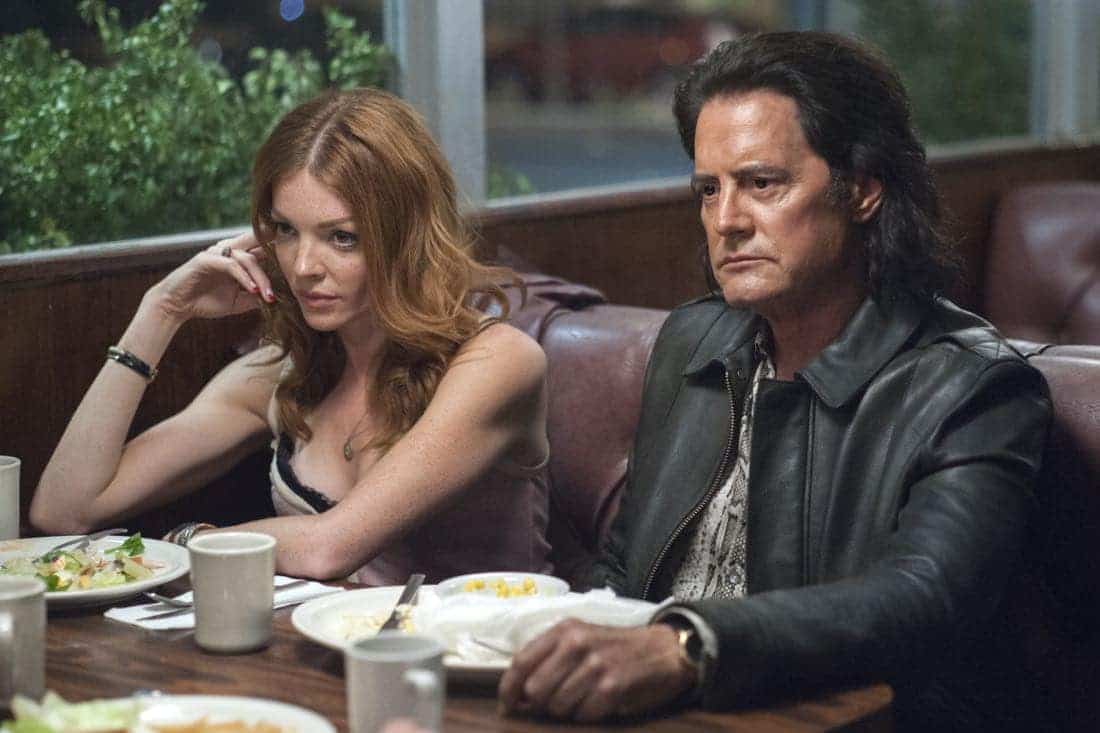 More than twenty-five years have passed since the cult favorite TWIN PEAKS left the airwaves after a mere thirty episodes. Last night, it returned to television with a brand-new season on Showtime. The two-hour premiere was met with much anticipation. Does it live up to the hype?

I recently binged the entire thirty-episode original run, plus the film Fire Walk With Me and the ninety minutes of deleted scenes known as The Missing Pieces, and I loved every minute of it. I don’t fully get why some people consider the second season and movie so inferior. Yes, it becomes less focused in year two, but I still enjoy it a lot. So I am going into the new stuff super pumped, definitely a fan.

But I have to say, I was left underwhelmed by the premiere episodes. This, despite all of the beloved returning characters and an immediately dive further into the mystery of the Black Lodge. Having slept on it to reflect, I think I can pinpoint why.

The lifeblood of TWIN PEAKS (film aside) is Agent Dale Cooper (Kyle MacLachlan) and, to a slightly lesser extent, his relationship with Sheriff Truman. I like the other characters, but the story flows best when we are watching these two investigate together. The utter joy Cooper exhibits at the simplest things, such as cherry pie, bring an innocent magic that is enhanced whenever he is hanging out with his best bud. These initial hours lack that entirely.

Yes, Cooper is still essentially the lead, but he spends the entire two hours in the Black Lodge, where he can’t be himself. It’s impossible, given the structure of that place, and while that can make for a cool sequence or two, Cooper needs to get out before things can really start. MacLachlan also plays the evil doppelganger of Cooper, but again, this version lacks the charisma and magnetic personality of the real Cooper, so it’s not the same at all. And since Truman isn’t returning for the new episodes, we definitely don’t get any of him.

We do see other familiar faces in hours one and two. The Log Lady (Catherine E. Coulson) and Hawk (Michael Horse) are the best of those because they actually have plot, reopening the case of the missing Dale Cooper. Sadly, Coulson passed away, so she’ll have to exit the story soon. Laura Palmer (Sheryl Lee) also furthers things a little, albeit confusingly (which I have no problem with, and seems consistent with the old). But most of the others don’t have any kind of story to speak of, basically just making cameos so we can see them again. They all need their separate subplots that eventually intermingle in order to make them interesting. Lacking that, most feel gratuitous.

There are a slew of new characters with story, and multiple new settings are introduced, which is cool. I like that TWIN PEAKS is no longer confined to the town. I’m especially interested in what’s happening in New York City, and I always enjoy actress Madeline Zima (Californication). Unfortunately, much more screen time is spent on Evil Cooper and Bill Hastings (Matthew Lillard, Scooby-Doo, The Bridge), who are far less compelling. I don’t blame either actor, their story just isn’t at the same level as classic TWIN PEAKS story so far.

I understand that the new TWIN PEAKS, in keeping with its earlier incarnation, is a marathon, not a sprint, and so may end up being worthwhile and engaging as it plays out. Still, I feel that it needed to start strong in the first two hours, and by withholding the best version of Cooper, focusing largely on uninteresting new roles, and doing little with most of the returning cast, it totally misses the mark. Things needed to happen a little quicker at the front, at least providing a hook for the fans, and these episodes didn’t really do that.

Thankfully, Showtime has already put out episodes 3 and 4 on their streaming service, so I’ll be checking those as soon as possible to see if it improves.

TWIN PEAKS episodes one through four are available now to Showtime subscribers, and new installments air Sundays at 9/8c.