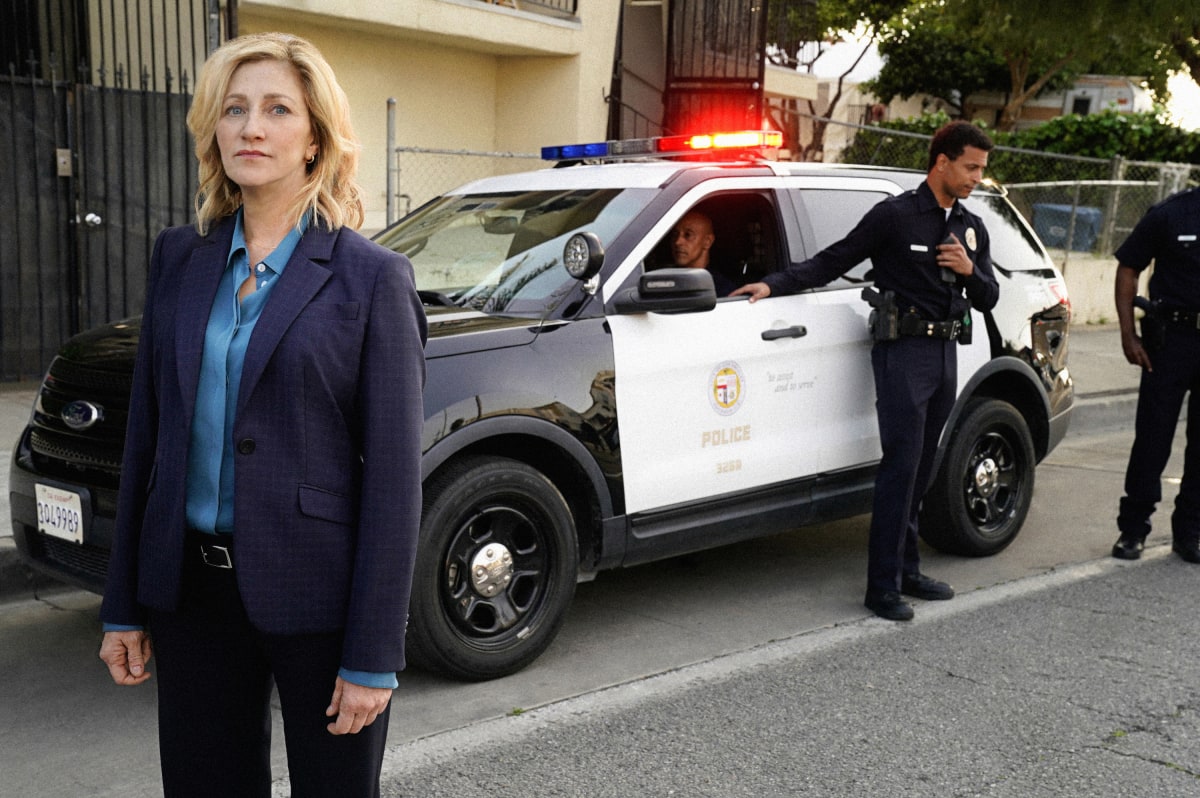 The new CBS drama TOMMY is about the first female police chief of police in Los Angeles. In this fictional story, the mayor is forced to fire the previous chief after lots of scandal comes to light, from the chief’s own affairs, to officers under his command being involved in illicit sexual activities. Not all of the cops agree with the dismissal, so our hero, Abigail “Tommy” Thomas, has her work cut out for her.

Edie Falco (Nurse Jackie, The Sopranos) stars as the titular character. Falco is amazing in everything she does. She conveys so much subtlety and nuance, and acts the hell out of each scene. Even in the pilot, there are layers to her performance, especially in Tommy’s extremely complicated relationship with estranged daughter Kate Jones (Olivia Lucy Phillip), as well as her interactions with the mayor, Buddy Gray (Thomas Sadoski, The Newsroom), who is careful to avoid taking too firm on a position on anything he doesn’t have to. There is a lot for Falco to work with in those scenes.

There are also some wonderful supporting cast members. Sadoski is a favorite of mine, and Buddy is a terrific role for him. I enjoy Ken Rosey (Michael Chernus, Orange Is the New Black) as lawyer / speechwriter Ken Rosey, who adds a layer of optimism and idealism into the plot. Russell G. Jones (The Americans) is solid as stalwart Donn Cooper. Vladimir Caamano (Runaways) is delightfully playful as Tommy’s protection and unofficial advisor, Abnar Diaz.

I really want to like this show because it is pleasingly political. Tommy and Buddy aren’t enemies in the traditional sense, but in many ways, they’re locked in a struggle. There are interesting turns, like when Buddy’s guy Doug Dudik (Joseph Lyle Taylor, Sneaky Pete) attempts to hurt Tommy while colluding with the former chief, Milt Leakey (Corbin Bernsen, Psych), and instead helps her. Tommy’s dealings with ICE are inspiring, and her scene with Blake Sullivan (Adelaide Clemens, Rectify) about sexism in the work place is touching.

Yet, there’s definitely something missing from TOMMY. Part of it is how manipulative those latter two bits from the paragraph are, feeling designed to play with viewers’ emotions more than tell a fresh story. There’s also a strong element of procedural, as occurs far too often with CBS dramas, which drags it down. Not to mention, there’re a lot of familiar aspects to the story that have shown up in plenty of other programs as of late, which doesn’t help the originality factor. I can’t help but wonder how much better TOMMY would be if it were penned by Aaron Sorkin, as the drama seems to share a bit of DNA with his works, but pales in comparison.

For the record, TOMMY isn’t bad and I haven’t given up on it yet. FOX’s Deputy, which premiered a few weeks earlier, is in the same vein, and I’m watching both to see if either wins out as the better series, or if either earns a season pass on my TiVo. If TOMMY (or Deputy) embraces the character study element in a significant way and puts that at the center most weeks rather than running down this baddie or that on, they could be very good. But if they play to what they think the “common viewer” wants, they’ll never be anything more than easy escapism.

At the moment, TOMMY has a leg up over DEPUTY because of Falco, whom I have to mention again is just so darn good. But she wouldn’t be the first lauded performer to take a role that is beneath her. I’m not saying Tommy is beneath Falco, because on paper, there’s a lot in Tommy’s favor. But I fear that could end up being the case. Only time will tell.