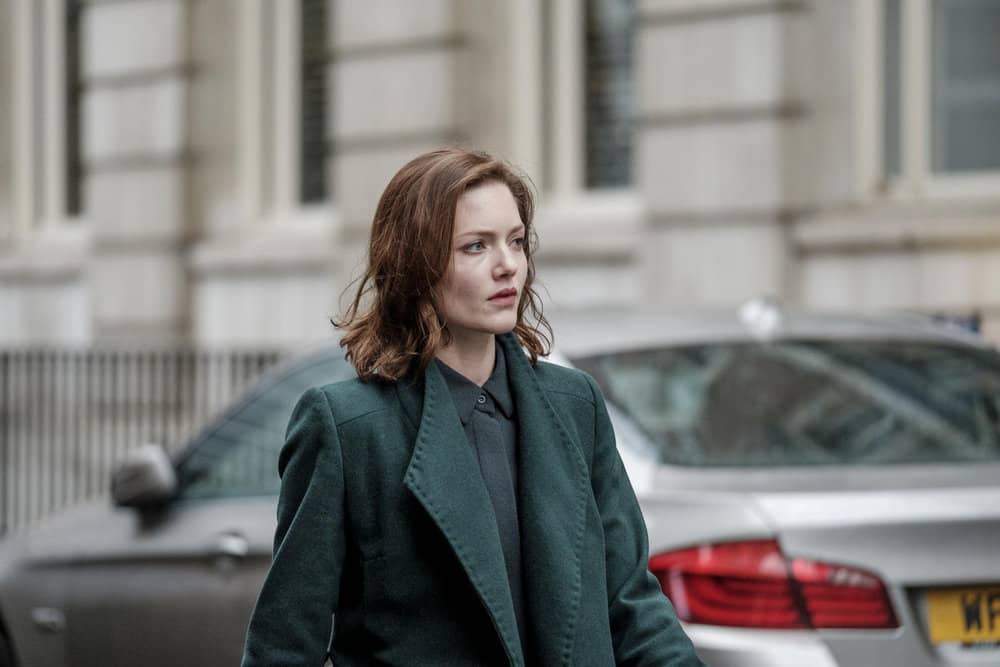 NBC’s new streaming service, Peacock, launched today with a handful of original series. One of them is THE CAPTURE, a six-episode drama (with the first installment free to non-subscribers) in which a military officer, just cleared of a crime during wartime, possibly commits murder against the barrister that defended him. Did he do it? If he did, was he sane at the time, since he doesn’t seem to remember it? If he didn’t do it, who faked the CCTV footage showing him do it and why? The last seems far-fetched, but it is a very interesting story.

My first thought about THE CAPTURE was that it feels like a British crime drama. Unsurprisingly, it is, having aired on BBC One last fall. So by saying it’s a Peacock ‘original’ series, that only means it’s original on the platform here in the States. In my opinion, Peacock doesn’t deserve much credit for buying it, although the show certainly deserves an American run. If the streaming site (not available on most streaming devices, a major knock against it) is seeking to set a brand for itself, this doesn’t do it any favors, being obviously someone else’s borrowed style.

At the center of THE CAPTURE is DI Rachel Carey (Holliday Grainger, The Borgias), a fast-rising cop who needs to oversee a major investigation to move up the next rung on the ladder. The case mentioned above may just be it. Not everyone who works with her is happy about her rapid ascension, but the ones that seem smart apparently respect her, so she’s a Good Guy; a typical driven, strong hero. Grainger fulfills the role very nicely.

Shaun Emery (Callum Turner, War & Peace) is the soldier who spent time behind bars and then was cleared, just before being arrested again. This character is the complex one, and surely will be given the most thought by audiences. It seems extremely likely that he did commit the murder, given that the CCTV stream was witnessed as it ran live, even if he doesn’t have any memory of it. And he has no explanation for what is shown. As long as you believe Shaun is telling the truth as he knows it, there definitely appears to be mental issues key to the issue at hand. Shaun’s lack of memory could be an act, but it doesn’t feel likely.

What’s more, knowing he could do something like this calls into question if he was innocent of the other crime, which was chalked up to bad technology. But maybe the tech wasn’t flawed. In fact, camera advancement is as much a character as the two leads. CCTV is shown quite a bit, as is the body cam Shaun wore overseas. Most of the evidence in both cases hinges on this footage. How reliable is it? Given that it is called into question right away, it certainly seems to have its fair share of flaws. So can it be trusted at all, even when what it’s showing seems like an obvious crime?

There have been other shows with a similar hook as THE CAPTURE uses cameras. There have also been plenty of other British crime dramas in this vein that are widely lauded and highly entertaining. This could indicate that THE CAPTURE isn’t needed, given that it fits very firmly into already established molds. And yet, it is compelling, with solid direction, writing, and acting that mean, even if you’ve seen a bunch of the others, it may be worth it to watch this one, too.

Admittedly, I’ve come out against American crime procedurals in the past. I don’t know why I find British six-episode formulas better than a case-of-the-week format, but I do. THE CAPTURE is a great example of this.

Watch THE CAPTURE on Peacock now.