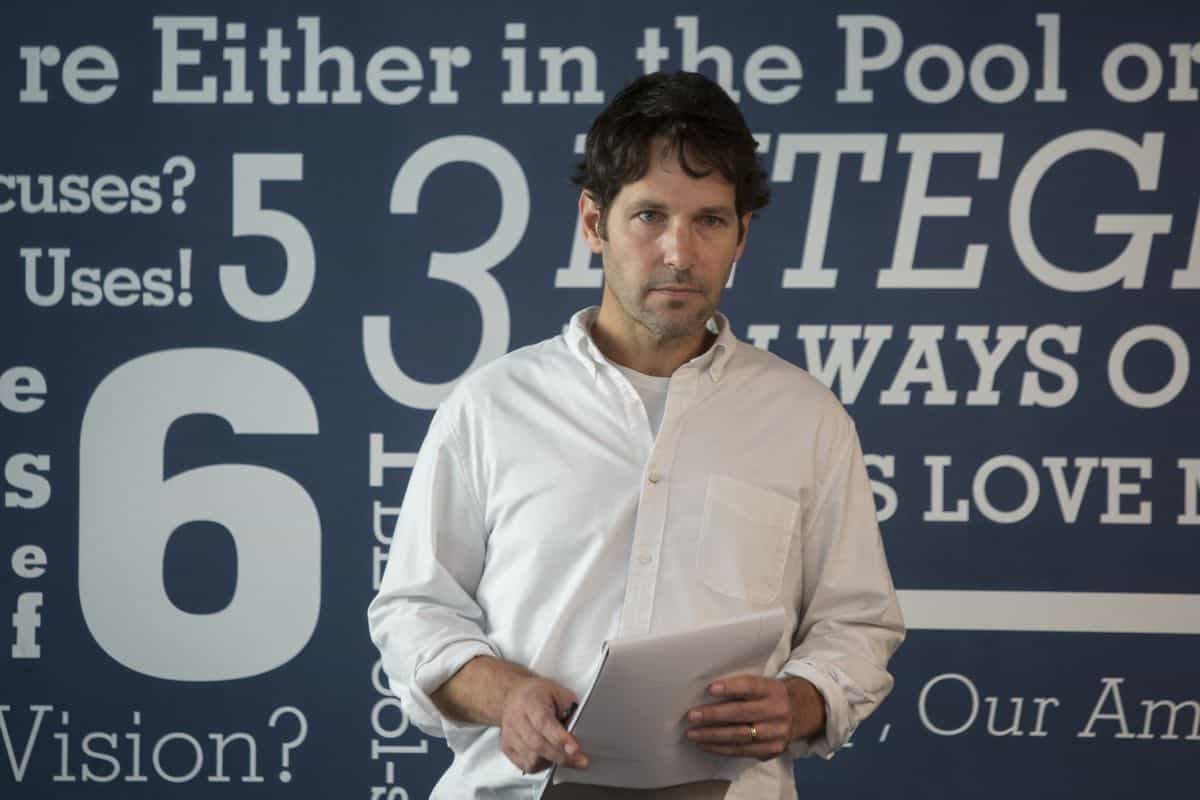 Looking at the poster of Netflix’s new series LIVING WITH YOURSELF, you might think you know what the show is. After all, Paul Rudd (Ant-Man) has made plenty of comedies, and many of us know what those are. They’re familiar and amusing, but not usually ground-breaking or particularly memorable. I’m not picking on Rudd here, and I enjoy the genre he works in, but there’s a certain predictability to a lot of that resume. Toss in the clone aspect, and it seems like it’ll contain even fewer surprises, with the duplicate jokes having been done on numerous occasions in the past.

If that first paragraph describes your initial thought, as it did mine, you could not be more wrong. LIVING WITH YOURSELF is a very complex and rich tapestry of a world and story, with characters who go through complicated issues and question their identities. It’s funny, sometimes, but that’s beside the point, as it is so much more than that. Like The Good Place, it makes you think about what it means to be a good person, and this one also gets into motivation, the paths not taken, how experience shapes us, the idea of a soul, being one’s best self, and a lot more.

Rudd is excellent as Miles Elliot, maybe the best role in his career thus far. Or rather, roles, as he plays two versions of Elliot. One has been worn out by some tough things in life, frustrated with his job, and fighting with his wife. The other has the exact same memories, but a fresh body unencumbered by aches, pain, and stress, giving him a totally different viewpoint. He’s the idyllic Miles, the person Miles could be if he started over with a clean slate. It’s interesting just how much an attitude makes a different, but it requires a huge thing like being cloned in order to gain that new attitude. It’s a testament to Rudd just how different these two parts seem despite being essentially the same individual.

The cloning process itself opens up all sorts of questions. The operation is secret and shady, and at least some clients don’t realize the operation involves killing the original human after the copy is made. In Miles’ case, an error causes the death not to stick, and thus the problems are born. These two Miles share one car, one job, one social security number, which isn’t a practical way to live. And they both want that one life. Not to mention, the guys that run the cloning experiment (James Seol and Successions’s Rob Yang) have their own stuff going on.

In early episodes, Miles’ wife, Kate (Aisling Bea, The Fall), seems like the one glaring problem with the show. Not because of anything Bea is doing (or not doing), but because she isn’t developed at all, playing a pretty straight-forward, one-note spouse, the type present in so many shows and films. But by the fifth half hour, which centers on Kate, LIVING WITH YOURSELF proves the final piece of its worthiness by giving Bea a showcase to shine. As soon as her part of the story is filled in, the plot gets even better, really fleshing out the world in a needed way. We quickly care as much about her life as we do Miles, and that makes things so much more satisfying.

Other characters, including Miles’ co-worker Dan (Desmin Borges, You’re the Worst) and sister Maia (Alia Shawkat, Arrested Development) add little bits that will surely pay off, and there is a fair amount of mystery baked in, too. It’s a delightful, engaging mess of a world, one that feels very lived in.

I cannot recommend LIVING WITH YOURSELF enough. This show is excellent, stand-out in a landscape filled with great programming, and has something new to say. Season one is streaming on Netflix now, so go check it out.