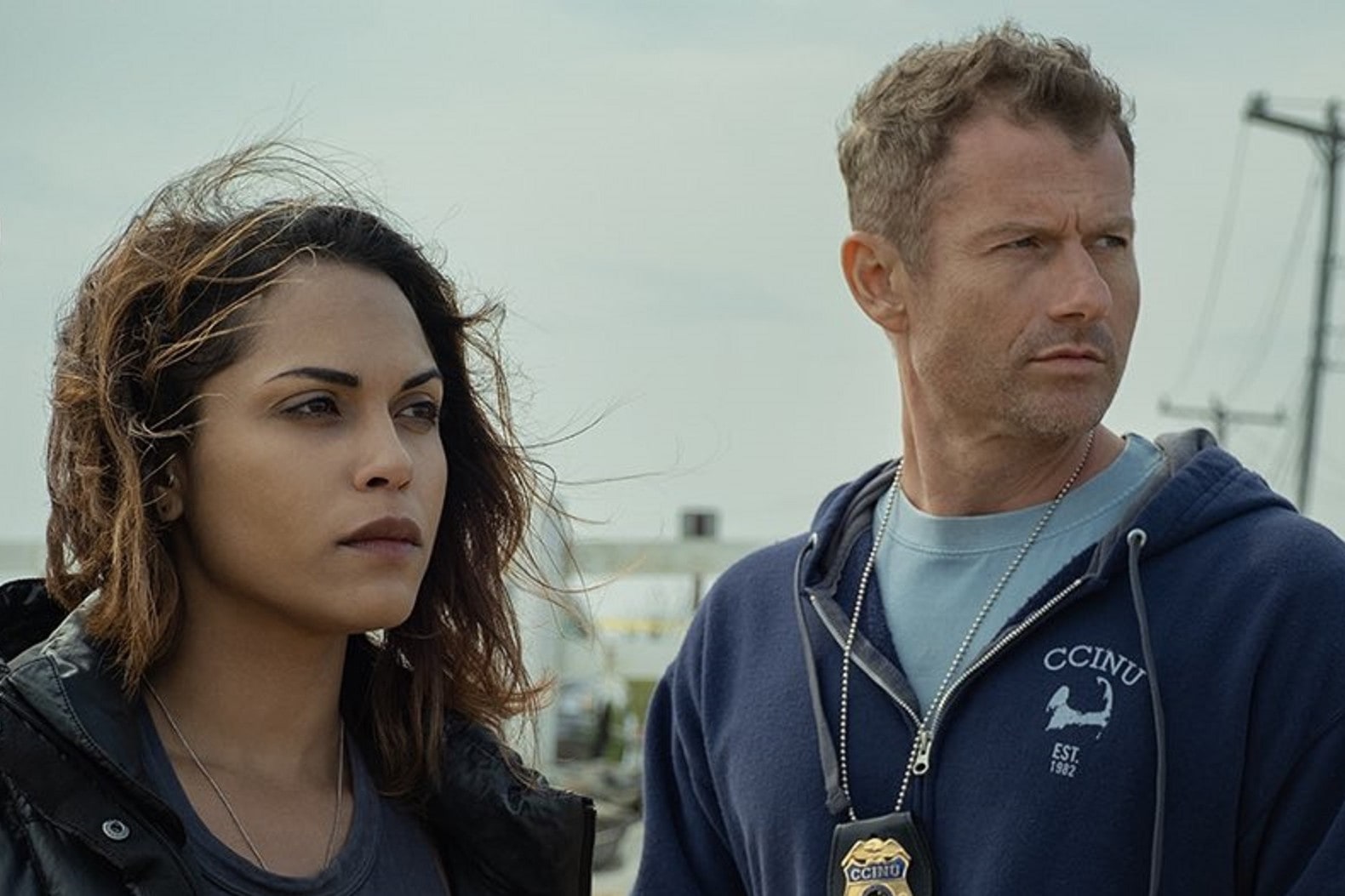 Starz’s most recent drama is HIGHTOWN. Jackie Quiñones is a National Marine Fisheries Service agent, loves to party hard and hook up, both things easy to come by in Provincetown, Massachusetts, a gay-friendly tourist town. But when she finds a dead body, and lets her vices take a little too much control, she ends up battling demons both inside and out.

Monica Raymund (Chicago Fire) stars as Jackie, and could not be a more compelling lead. Jackie’s behavior is abhorrent, but Monica finds the humanity and sympathy, as well as the driving motivations. It’s easy to see why Jackie’s partner, Ed Murphy (Mike Pniewski, Madam Secretary), likes her, and viewers will, too. Despite her substance abuse and womanizing ways, she seems to be a good person who cares about people and isn’t too strict on the rules, seeing the humanity in others. Though, she doesn’t seem to see it in her sexual conquests. The murder victim forces Monica to examine herself, and the audience gets the privilege of watching that introspective character arc.

Obviously, an antihero is nothing new. But there are many types of them, and Jackie feels fresh. It’s not just the fact that she’s not white, straight, or male, though that’s certainly welcome. It’s that her outlook feels a little different than most of the others I’ve seen, her attitudes being realistic and relatable as present. Aside from one big action-related thing, Jackie seems pretty darn authentic. Her pain seems real.

There is a great supporting cast that fills out Jackie’s world and plays varying roles, all of which will surely come together, even if it’s not obvious how right away. Amaury Nolasco (Prison Break) is a kingpin behind bars who is still pulling the strings outside. Riley Voelkel (The Originals) is his exotic dancing girlfriend who is much more capable than she first appears. James Badge Dale (The Pacific) is a police detective who takes his job a little too personally. The three of them are introduced in the same thread in the pilot, but I’m eager to see Jackie interact with them.

The setting is great, with the beauty of Cape Cod and the ocean grounded in grimy reality, a place both lovely and dirty. Much of the series was filmed on location, and it shows. It helps to move a show away from Hollywood and to somewhere more visually interesting, or at least diverse in its look, and HIGHTOWN looks great. I hope more productions keep up this trend of getting away from Southern California, a vista we’ve seen enough of for awhile.

HIGHTOWN is also well-written. I don’t want to give too high praise to a series just getting started, and I’ve only seen the first episode. But immediately, I drew comparisons in tone and style to The Wire Season 2 (which I also happen to be finally watching right now). I’m not going claim HIGHTOWN is as good as The Wire, but the fact that it didn’t suffer for the comparison says something.

The murder and drug plots are far from novel, making up a large percentage of television programming today. I review a lot of these cable or streaming pilots with similar goals and themes, and haven’t been taken in by very many of them. However, there’s a magnetism to HIGHTOWN greater than the sum of its laudable parts, and I found I had a hard time resisting its call. I hadn’t planned to renew my Starz subscription again until Outlander returns for another season, but I’m curious enough about the rest of this one to go ahead and give it a binge.

Check out HIGHTOWN on Starz now.