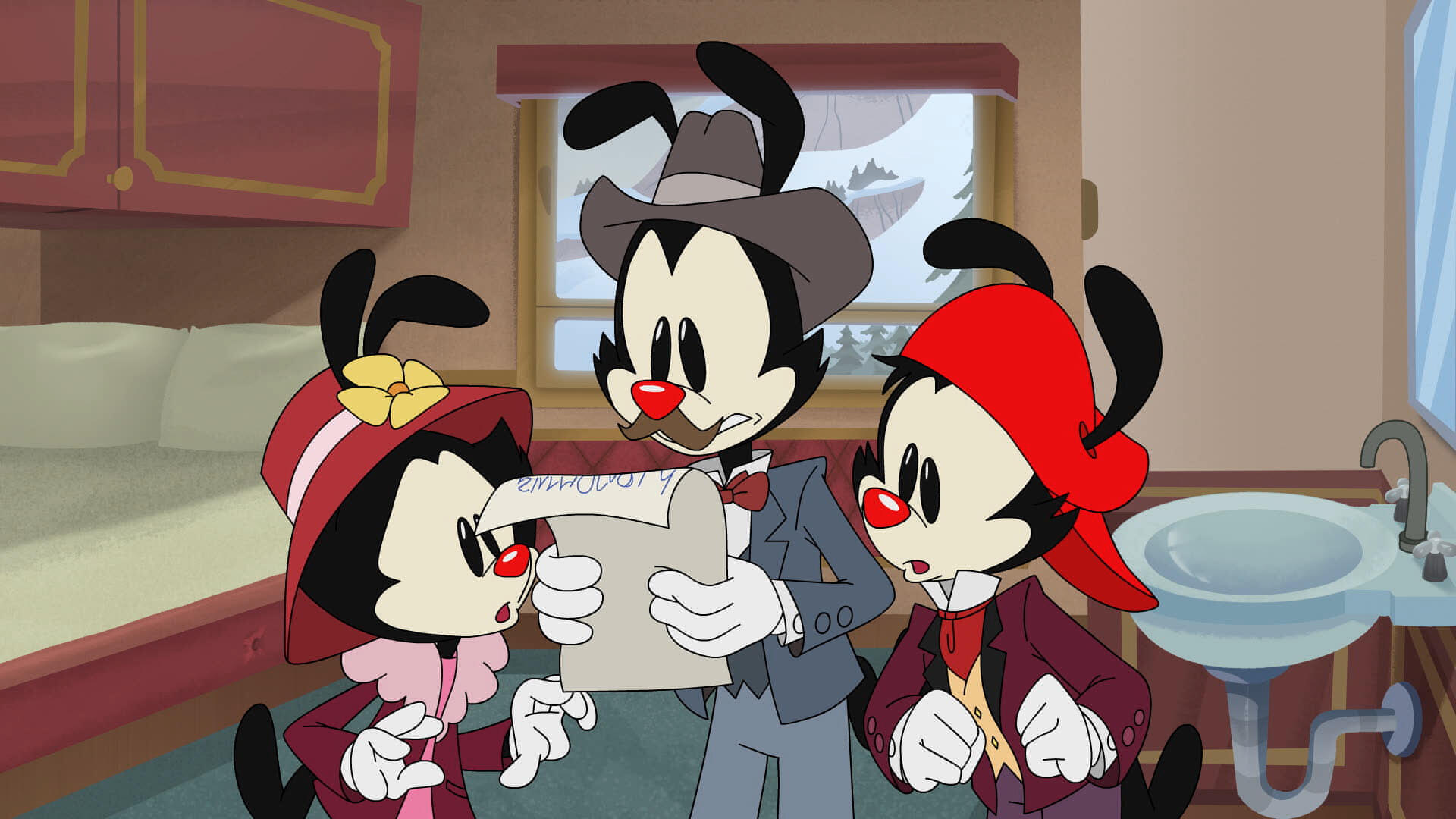 You may be surprised to learn that the original run on ANIMANIACS was only ninety-nine episodes long. It has such an oversize place in our culture that I assumed it boasted more seasons under its belt than that. The gently subversive cartoon that brought original music and adult humor (of the kind that easily flew over kids’ heads) in the 90s is well-remembered by my generation, and found great popularity a few years ago when it arrived on Netflix.

So it shouldn’t be much of a surprise to learn, if you didn’t already know, that the series is back on Hulu this week with the first new batch of new episodes in twenty-two years (and a second season already ordered). That’s right, Yakko (Rob Paulsen), Wakko (Jess Harnell), and Dot (Tress MacNeille) Warner have returned to the Warner Brothers movie lot and moved right back into the tower as if they’d never missed a beat.

The first episode back (the only one I’ve yet reviewed, though I’ll surely watch more) spends a fair amount of time breaking the fourth wall and discussing not only their time off the air, but everything that has transpired since. Some of this is done in original music, with full orchestral accompaniment. Later, the focus is on reboots specifically. Of course it’s funny, of course it’s timely, and of course it’s smart, because that’s the ANIMANIACS brand. It would be insincere for them not to comment on their return, and comment they do, in spades and in song.

As much as the difference is acknowledged, though, the show feels exactly the same. Jokes are topical and fresh, but they were back in the 1990s, too. The brand of humor espoused is unchanged, not quite biting, but not exactly tame, either. Ralph the Guard (Frank Welker) is still chasing the trio and easily being bested. There is acknowledgement that the characters may be a bit more accepting and forward-thinking in a socially liberal way, as the culture has gone, but ANIMANIACS never spent too much time commenting on that, so that doesn’t feel like a focus. And possibly problematic characters like Minerva Mink and Hello Nurse are nowhere to be seen, though not missed.

When it comes to the side stories, though, that’s where fans will likely notice the difference, though not right away. The most successful characters, which garnered their own contemporary spin-off, Pinky (Paulsen) and the Brain (Maurice LaMarche) are fully intact. The pair have the middle of three segments in the new premiere, with updated technology, but little else different for them. (The opening and closing segments are given over to the Warners.) But the theme song indicates we shouldn’t expect to see Slappy Squirrel, the Goodfeathers, Buttons and Mindy, or the others anytime soon. They’ve been cut from the show. The opening credits only hint there will be new characters, but other than a fresh network exec, none are revealed in episode one.

Unsurprisingly, a saxophone-playing Bill Clinton is also absent for the opening title sequences. References to W., Hillary, and Trump are in the first episode to acknowledge there may be some political jabs, though it’s doubtful there will be any true opinions expressed about such people. So worry not those who aren’t looking for culture wars in their cartoons. Celebrities and pop culture characters are familiarly referenced.

In short, the differences are minor, and though I’m anxious to see what the new side segments are, the premiere is a return to form. I’m sure it will perfectly give most people tuning in exactly what they want. ANIMANIACS doesn’t seem likely to jar fans or disappoint. I do wonder how long more-of-the-same will be able to continue, but for the moment, I’m just glad the Warners are back on television.