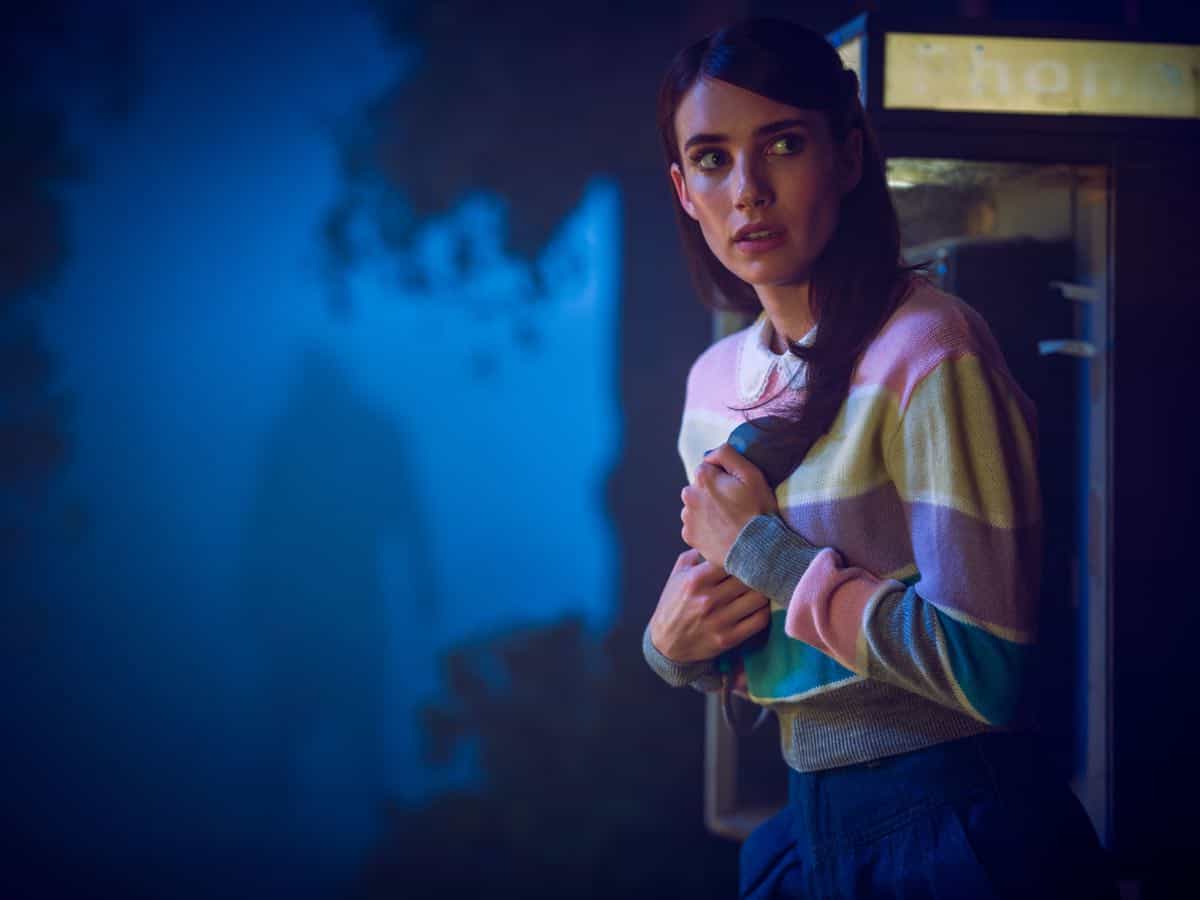 A new season of AMERICAN HORROR STORY has started! This one is subtitled 1984 and takes place at a lakeside camp near Los Angeles in the summer of that year. Orwell, it isn’t, with a creepy massacre back story and a violent criminal who is breaking into homes in the city. Which characters will make it out alive?

First it must be said, as we’ve come to expect from AHS, the visual look is amazing. From sets to costumes to hairstyles to props, each are meticulously detailed to be of the era. Actually, more importantly, it looks as if from a movie from that era. The highly stylized, a bit more heightened that reality, is a hallmark of every season of the series, and that continues through this one. Even the lighting and film end up looking like this was made a few decades ago, albeit with a sharp picture. This isn’t novel for AMERICAN HORROR STORY, but it’s important to keep up the quality nine seasons in.

The cast is a mix between familiar faces and new ones. Emma Roberts (AHS: Coven) returns as lead Brooke Thompson. A departure from Roberts’ normal bitchy role, Brooke is timid and agreeable. Attacked in her apartment, Brooke allows herself to be persuaded by new bud Montana Duke (Billie Lourd, AHS: Cult) to flee the area and become a camp counselor, despite being hesitant to miss college classes she’s signed up for. The girls are joined by athlete Chet (Gus Kenworthy, Sharknado 5), actor Xavier (Cody Fern, American Crime Story: Versace), and drug supplier Ray (DeRon Horton, Dear White People).

The four (sans Brooke) make up an established group of friends that welcome her in. One assumes that these will be the primary leads, those hunted by the killer or killers this season. Older staff members like camp owner Margaret Booth (Leslie Grossman, AHS: Cult), doctor Rita (Angelica Ross, Pose), and creep Trevor (Matthew Morrison, Glee) seem likely to stay on the fringes. This makes sense for the 80s genre, though other seasons of AMERICAN HORROR STORY have tended to split the age groups. For instance, Coven had a group of young witches, but also meaty material for the older characters. That’s part of what seems to set 1984 apart.

Setting itself apart is likely a good idea with franchise veterans Sarah Paulson and Evan Peters (mostly) sitting things out. Instead of wondering what part they should be playing and measuring any other performer against them, it’s easy to settle in with this new group. AMERICAN HORROR STORY: 1984 is a bit reminiscent of Scream Queens, another Ryan Murphy project starring Roberts. However, Scream Queens was campy and this is camp the noun, not the adjective. It’s a bit odd to see AHS in that light, but it works. As usual, there is plenty of blood and plenty of mystery.

One does wonder where 1984 will go besides slasher flick, as most seasons of the program have bent a couple large themes. Rumors have swirled that aliens might come into the mix. Ghosts also seem a reasonable guess. But I wonder at the specific year, which works because of the Olympics element of the story, but also calls to mind a famous dystopian novel. I’m hoping for a bit of Orwell slipped in here somewhere. If does not, I kind of think the title should have been something else.

The bottom line, though, is that AMERICAN HORROR STORY hasn’t missed a step with 1984, and we have a season of chills and thrills awaiting us. I am very much looking forward to it.