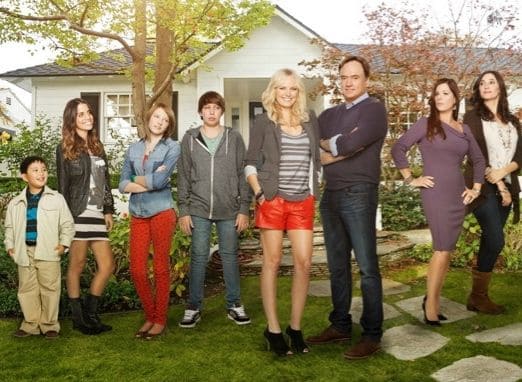 One of ABC’s new sitcoms is called TROPHY WIFE. Young-acting party girl Kate (Malin Akerman, Watchmen, Childrens Hospital) meets the guy of her dreams after falling off the stage while singing karaoke. But she soon learns that marrying him means taking on three children and two ex-wives, giving her an instant family.

The name of the show may be TROPHY WIFE, but Kate is anything but that negative label. She is a warm-hearted individual who puts her all into everything she does, including being a wife and stepmother. Kate wants to be the best parent she can be for the kids, plays nice with the exes, and truly seems to love Pete (Bradley Whitford, The West Wing, The Cabin in the Woods), her new man.

We see this when Kate eagerly takes a parent-teacher conference with stepson Warren’s teacher (Phyllis Smith, The Office), and as she covers for Warren’s twin sister, Hillary (listed as Once Upon a Time’s Bailee Madison on the show’s official website, though played by someone else in the “Pilot”). Even when Kate is mad at Hillary for bringing vodka to school or uncomfortable about Warren’s (Ryan Scott Lee, Super 8) seeming lust for her, Kate tries to make the situation right without judgment or anger.

Not that Kate’s best is good enough for Warren and Hillary’s mother, stuffy Doctor Diane (Marcia Gay Harden, The Newsroom, Mystic River). Diane is icy from the start, definitely not approving of Pete’s latest relationship skewing younger, or having her children around such an influence.

Still, Diane is preferable to Pete’s second wife, Jackie (Michaela Watkins, Enlightened, Wanderlust), a flighty, sneaky, liar who has no trouble hiding the death of her son, Bert’s (Albert Tsai), hamster from him, or hiding a key to get into Pete’s house. Jackie is trouble, especially when she considers herself still part of the family, clearly having nothing else of significance going on in her life.

Now, as I recently complained about in another review, there are a lot of family sitcoms out there, so we don’t necessarily need any more. Yet, TROPHY WIFE doesn’t feel like most others. It’s sort of a mix between Modern Family and The New Normal in tone, showing a more blended clan much more common today in the world, though underrepresented on television, than in years past. As such, it’s another type of family series, not the same old thing over again.

It also helps that Akerman is a capable leading lady, playing both the emotionally charged scenes and the over-the-top physical comedy with great acumen. In the presence of Whitford, Watkins, and Harden, all very talented in their own right, this group delivers a very funny premiere episode.

Kate is a very likeable character who seems authentic, even if she isn’t relatable. She is still in touch with the things that make up her personality, maintaining a great relationship with drinking buddy and bartender Meg (another wonderful performer, White Collar’s Natalie Morales). Yet, as Meg takes Kate’s developments in stride, it helps the viewers understand that Kate hasn’t changed and isn’t trying to, just moving into the next phase of a full life.

One does begin to wonder what kind of man Pete is. We see him as the calming influence when everyone is together, but there are definitely some different facets to him to marry three so very different women. He seems to be totally committed to Kate, and one assumes he was equally so to Jackie and Diane during their tenures, though I’m curious to see why those pairings feel apart. He’s a loving father, but one with flaws, such as having trouble being honest with a child about a dead pet. I look forward to learning more about him.

Now, this being a pilot, there are a few things the show can improve on. For one, it would be nice if it was a little more consistent with its tone. I’d also like to see more cohesive, focused stories, as this episode meanders around a lot among the various characters. But I dig the energy and the cast quite a bit, so I think it will be something worth keeping an eye on. As long as it allows Akerman the opportunity to continue on Childrens Hospital.

TROPHY WIFE premieres Tuesday, September 24th at 9:30 p.m. ET on ABC, and the “Pilot” is available on Hulu now.