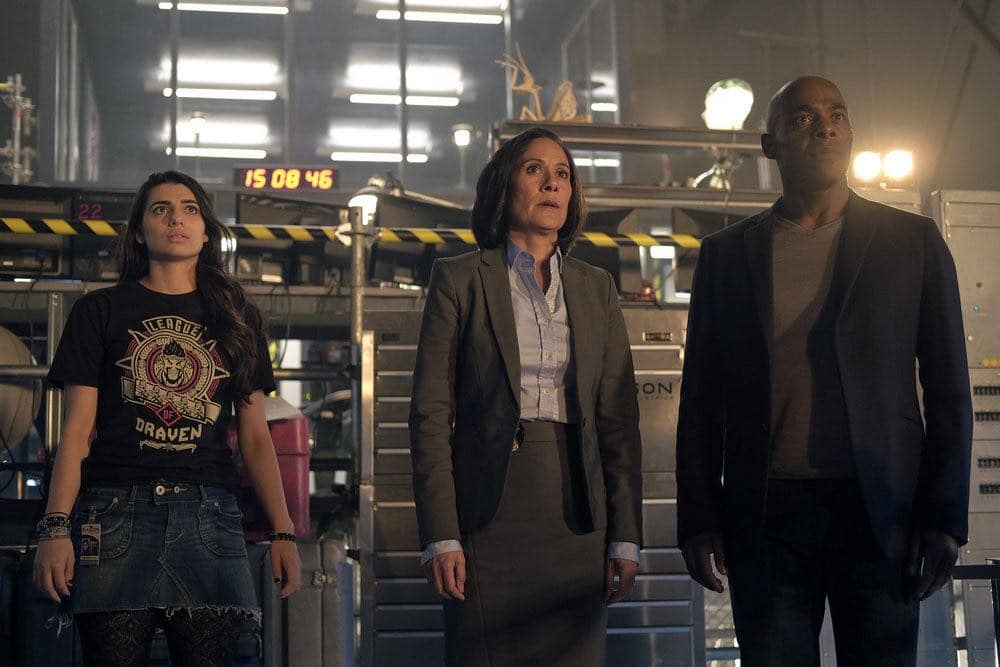 A ruthless villain steals a time-machine and the government quickly sends a team of a soldier, a scientist and a historian after him to eliminate him before he does irreparable damage to the existing timeline. In NBC’s new adventure series TIMELESS, the action starts and does not stop leaving little time to peel back the layers on the characters that are immediately introduced. In order to get a better sense of who our heroes and villain are, we made a trip to the set of TIMELESS to get the answers fans will want to know.

Stars Paterson Joseph and Claudia Doumit reveal what drives their characters, Connor Mason — creator of the time-machine — and Jiya — one of the surviving scientists — to participate in this crazy mission to preserve time and stop a madman from destroying history and the future along with it:

Tell me a little bit about TIMELESS. Who are you portraying on TIMELESS?
PATERSON: I am playing a guy called Connor Mason. He’s the inventor of the time machine. What happens is my machine is stolen, so I take out the old machine, the prototype, for the “life boat,” which I think is a more beautiful machine, even though it looks more mechanical. It’s a more beautiful machine, and I send a historian, a soldier, and my technician back in time to go get it back. Claudia plays one of our major technicians. She’s the one who sends the machine off and monitors it and then finds the other ship back in time. So she’s our technical genius.
CLAUDIA: [Laughs] Easy stuff. Easy, everyday, normal stuff.

How does one steal a time machine?
PATERSON: What you need, first of all, is somebody to drive it, or to fly it, so the first thing he does is steal our best pilot. A guy called Anthony Bruhl (Matt Frewer) has been kidnapped by the villain from the beginning. We try to get him back. Save history. On top of that, we’ve got this organization who is really mysterious and have their fingers in many, many pies all across the world, and they have basically given me the money. That’s why I have to get it back. Not just for me, but because they’re on me and they want my machine back.

A man builds a time machine. Of course, he doesn’t plan for it to be stolen. What was he hoping to do with it?
PATERSON: This is the question I’ve asked the writers. It’s a really good question because actually I don’t really know. I mean, it’s a bit like the Everest thing, I suppose. It was there to be done. Somebody needs to do it. I suppose if it was militarized, if the American army wanted it, I would get a lot of money for it. If the Pentagon wanted to buy it from me, I mean, they’d need me because my technicians are the ones who brought it, so I guess there’s money.

Have they explained how your time machine worked?
PATERSON: [LAUGHS] No. Basically, we know that the technology doesn’t exist in the real world. We start with that.
CLAUDIA: There have been many sessions where the writers have talked about all of that stuff and then time-travel itself.
PATERSON: It just doesn’t work yet because we don’t have enough power, on Earth anyway, to generate that much power. I’ve been reading just a little bit of Stephen Hawking. Basically, it’s really all about having a powerful enough gravitational field that you could actually then begin to bend time. Since time is meant to be On a plane, linear, there is an idea that, since it goes from one end to another, that you could, like space, bend it. Because time obviously does bend as light bends. We see a light from the sun, we know that it’s not quite coming to us directly because of the angles it’s coming to us. We know that time bends … Well, light bends, space bends. Perhaps time bends too. If you can get a gravitational … You think about a sort of large rubber mat and you put a massive bowling ball in the middle of it, that causes that space to bend in on itself. We’re thinking, if we can get a powerful enough gravitational pull, you could travel along that and then bend yourself back.
CLAUDIA: [LAUGHS] You’re explaining time-travel to us?
PATERSON: I’m trying!
CLAUDIA: I’m loving it.
PATERSON: It doesn’t work because we don’t have enough power.

What’s powering this time machine?
PATERSON: That’s the question we haven’t answered yet. Perhaps it will remain a mystery.

It seems like, if you travel back in time, suddenly you’re like worn out your time machine, how do you get it back?
PATERSON: Power has become an issue. How to power a] time machine. There’s definitely a bit of nuclear power involved in it.

The time machine gets stolen and another time machine is sent after it. Do we ever get to see them come back?
PATERSON: Yes, they do. They come back in 4.
CLAUDIA: Yeah, they just come back. We see them at the beginning of the episode, disappear into thin air for while, in different times and then return.

Do the time-travelers check in?
PATERSON: They do check in. They might not always be able to do that. Later on, it might become a little bit more disjointed than that. At the moment, we’ve got a sort of present-day sandwich. It did start at the beginning, now, and then the end comes back. Now, it’s flipping back and forth from pre-history. What really happened to now, to what might happen if they changed history.

There’s a “butterfly effect.” Would that mean your guys’ characters might be different when they return?
CLAUDIA: Yes.
PATERSON: Yeah. It’s already happened to one of the main characters within the very first episode.
CLAUDIA: That was only a minor change.
PATERSON: It’s a minor change because one person didn’t die who should have died. Then it led to a new family, but what else has changed? That’s the correct question.

It must be kind of fun for you.
PATERSON: It’s the greatest fun. We just opened the Watergate episode. We just finished reading that. It’s like, “Watergate?” It’s brilliant.
CLAUDIA: Because you know what happened and then it’s nice to see they spin on it, like what actually happened.
PATERSON: Because those are the sorts of history that I didn’t know.
CLAUDIA: Me too.
PATERSON: Like I didn’t know there was an 18-minute section that’s missing from the Watergate tapes. What is in those 18 minutes? That’s really interesting about it.

You are learning a lot about history then.
CLAUDIA: [Laughs] I am!
PATERSON: Yeah. I mean, the Lincoln stuff is really good. Because he was always this iconic hero. Black and white, he was our hero. Of course, now we know that it is tinged with political reasons and financial reasons.

Lincoln also didn’t start out as a hero. He ended as a hero. He had a really tough journey.
PATERSON: Yeah, almost accidentally. The perfect kind of hero. I think you get a little bit of the basics of history. We may not always go in-depth and dig out what the truth was but a little bit more than you knew.
CLAUDIA: It’s nice to even just have that.

Plus, you’ve got a mysterious villain Flynn (Goran Visnjic) that we’re not so sure we’re supposed to hate or like.
PATERSON: Exactly, and there’s smart people in it. All the characters are smart. None of them are like obviously villainous or obviously virtuous.
CLAUDIA: It’s not black and white.
PATERSON: Exactly. Lots of shade in it.

And there’s a mystery to it beyond just why would somebody steal a time machine.
PATERSON: Yeah. “Why did he build it?” is a really good question, and I will ask them again. That’s a good question.

In the inter-personal dynamics, what are we supposed to know between these characters? Some of them obviously don’t know each other and they meet for the first time, but some of them are working at it for a while. What are we supposed to know about them?
PATERSON: From a Mason Industries’ point of view, the two characters that you meet the most are Jiya and Rufus (Malcolm Barrett) (Claudia Doumit). Actually, in Mason Industries itself, really the interaction of the actual employees is the two technicians. Me as their boss, is clearly not a cuddly, friendly boss. Rufus was plucked out of a very bad situation in Chicago when he was about 15. I sent him to live in California and paid for his education, paid for his mom to get out of where she was, paid for his brother’s education. I kind of own him, in many ways. He’s like a son.
CLAUDIA: It’s like a father/son relationship with strings attached.
PATERSON: Really lots of strings. Very conditional. With Jiya, obviously, I’ve plucked you out of MIT.
CLAUDIA: [Laughs] Yeah. I’m the best in my field.

Aren’t you kind of pissed you were not inited on the first time-travel trip? I feel there could be a a little bit of edge there, like, “I deserve that. That’s my opportunity.”
CLAUDIA: [Laughs] A little bit.
PATERSON: Yeah, that’s kind of it’s a good place for that story to go.
CLAUDIA: Yes.
PATERSON: It was great, actually. The writers are really brilliant at asking us some questions, hearing our answers, and actually writing stuff almost immediately. Because I’d say things like, “I think my character should be a bit more technical like he is in the pilot.” By episode three and four, that language is coming back in.
CLAUDIA: I think it helps them create a more concrete picture of who these people are, especially in relation to each other.
PATERSON: I mean, obviously they watch over the show. Because your character developed a lot since the beginning.
CLAUDIA: Yeah. Because you see it. Little shifts that are there when is stuff that is happening.

What do your characters kind of feel towards our trio initially? We’ve got again the historian, we’ve got the soldier, and we’ve got a pilot. How do they look at them?
PATERSON: You almost blushed then! Did you see that?
CLAUDIA: This is a very confusing relationship, one that will be looked into all the time and extended upon than initially seen in the beginning of the show. I think the first episode, she hasn’t really noticed Rufus (Malcolm Barrett) in any other context other than her work, other than as her co-worker. I think she respects him because she knows that he is smart. He knows what he is doing. That’s the reason he’ chosen. It’ll get into it more but she’s at a distance.
PATERSON: Even in that first episode, obviously he really, really likes her.
CLAUDIA: There is something in that. In what way, we don’t know yet what that relationship will be.

Are you guys enjoying Timeless? How many episodes have you come so far?
PATERSON: We’ve filmed four [episodes]. We’re on five. I’m enjoying every second of it.
CLAUDIA: I’m loving every minute of it, really.
PATERSON: I think it’s because it’s quite hard because it’s not a normal drama. It’s not a courtroom drama that’s all about facts of the case or whatever. It’s not a police drama either. Anything can happen.

To find out just what the time machine was actually designed for, be sure to tune in for the premiere of TIMELESS on Monday, October 3rd at 10:00 p.m. on NBC.