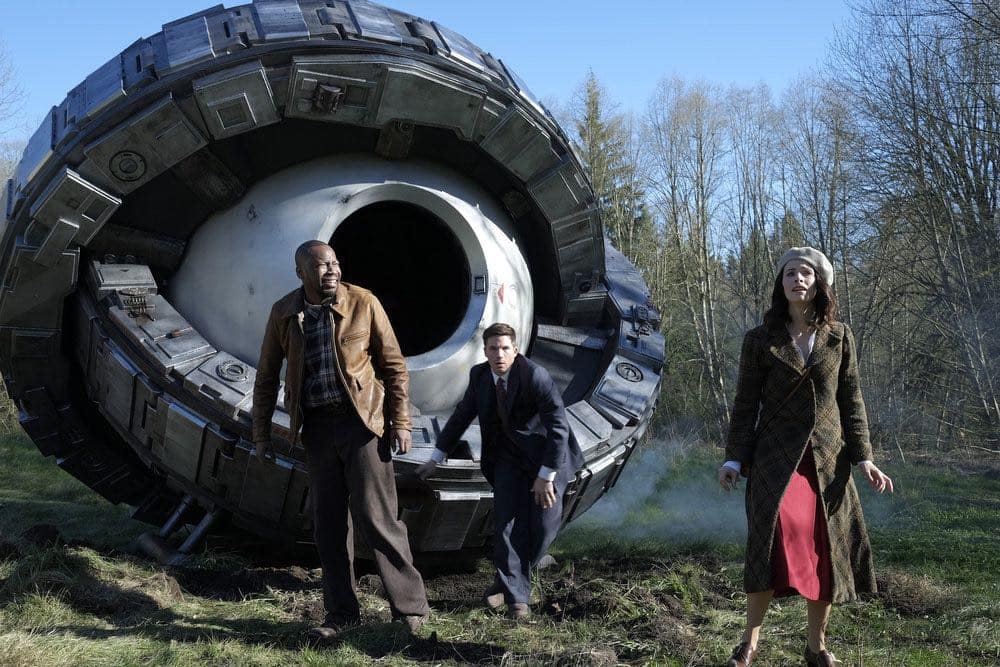 NBC, which does sometimes do some light sci-fi drama, has a new genre series this fall called TIMELESS. A gang of armed men break into a laboratory and steal a fully functioning time machine, intent to travel into our past and screw things up. Luckily, the facility still has their more basic prototype and assembles a small team to go after them and save history. Will they succeed, or is everything we know about to be changed?

Abigail Spencer (Rectify)n stars as Lucy Preston, a history professor caring for an ailing mother who has just been denied tenure. She, along with an elite soldier, Wyatt Logan (Matt Lanter, 90210), are recruited by Agent Denise Christopher (Sakina Jaffrey, House of Cards) to chase the villain, Garcia Flynn (Goran Visnjic, ER), across the ages. Scientist Rufus Carlin (Malcolm Barrett, Better Off Ted) is sent along with them because he knows how to use the equipment, even though there are some justifiable concerns that his darker skin color may be a hindrance before civil rights kicked in.

I really want to like TIMELESS. It’s not like any other show currently airing, especially not on a broadcast network. (It is admittedly sort of like DC’s Legends of Tomorrow, but since that is about superheroes, I think they’re different enough.) It has a cool concept and a decent cast. It definitely has mythology, backstory, and a serial arc, meaning it won’t just be a case-of-the-week series. For these reasons, it deserves a little consideration.

The make-up of the group makes sense, the scientist, the historian, and the soldier. The motivation of the bad guy is still hazy, but what has been said about it is interesting and begs further exploration. The rules for time travel as followed in TIMELESS also seem to be well thought out. I didn’t find any huge, obvious plot holes.

But there’s a general sense of shallowness to the whole program. The characters do have families and personal lives that play into their actions, but in a very superficial way. We’re told something about that character, and that immediately influences the plot in a very straight-forward way. There isn’t a lot of wondering who we can trust, or if there’s something someone isn’t talking about that might get in the way down the road. It’s kind of what you see is what you get.

There is also definitely the impression that while there be an ongoing story, a large portion of each hour will be devoted to action adventure and fist fights. Not bloody stuff, mind you; this series seems to take a family-friendly, tame approach. For example, when one character briefly wields a knife, I didn’t feel for a second she’d be able to swipe and draw blood with it, and indeed, she does not. So there’s a sanitized type of violence that feels more at home on television in the previous century than today.

Even the twists later in the hour, while interesting, seem easy to screw up. There is one very obvious one and one less so, but given the lack of depth present at the start, and the direct way the story unfolds, I don’t have confidence that these things are going to pan out in a cool way. I know I’m being vague, and part of that is to protect readers from plot spoilers, but part of it is because this complaint is more about an overall feeling I get while watching, rather than details I can point to to back up my judgement.

Overall, I like TIMELESS, but I don’t love it. My sense is that it will be like Revolution, with a cool premise that doesn’t live up to what viewers want from it.