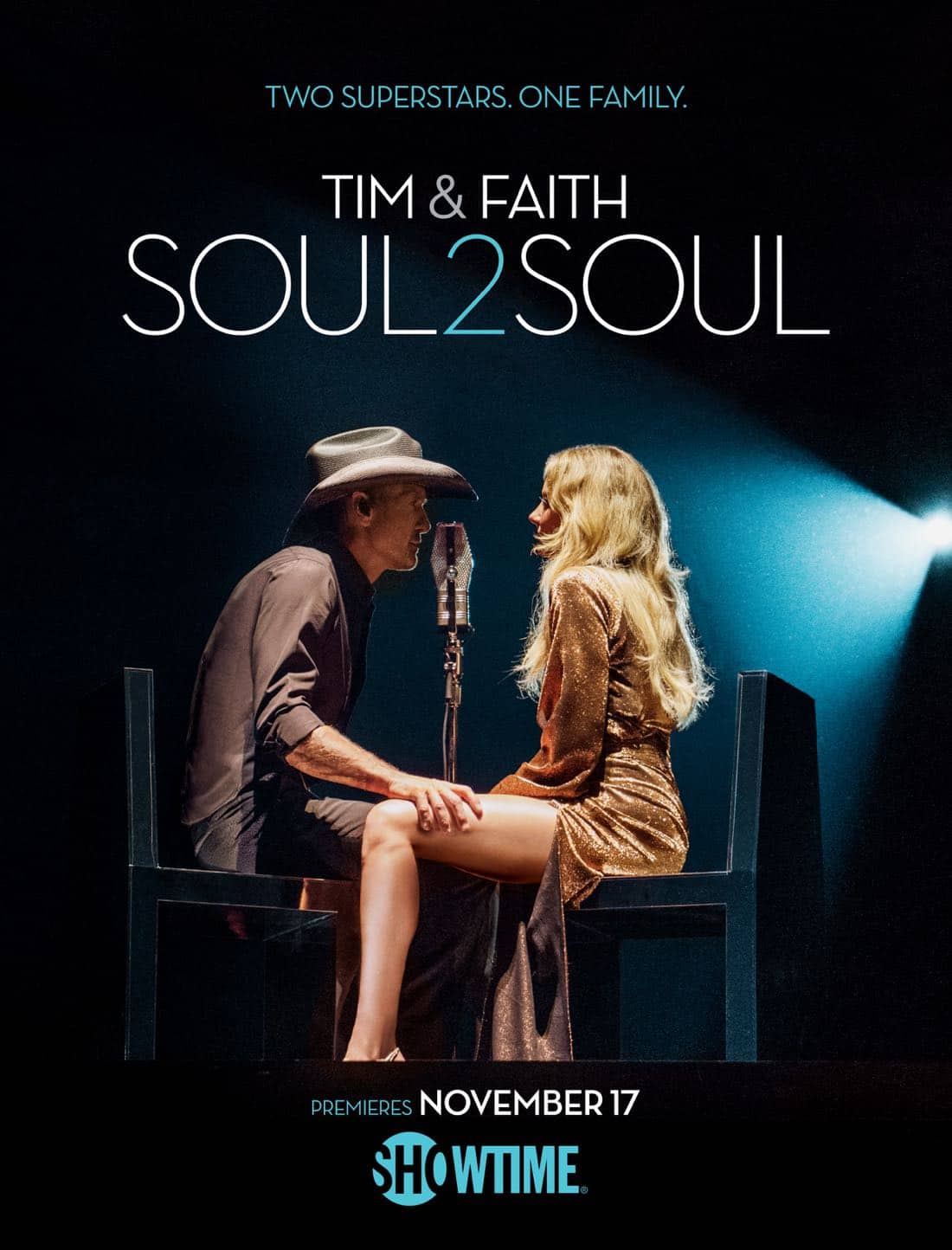 Today, Showtime Networks has announced that the concert special from Grammy® Award-winning superstars Tim McGraw and Faith Hill, Tim & Faith: Soul2Soul will premiere on Friday, November 17 at 9 p.m. ET/PT on SHOWTIME, on-air, on demand and over the internet. The special was shot over the summer in the U.S. on this year’s Soul2Soul The World Tour. Tim & Faith: Soul2Soul is directed and executive produced by the award-winning Magical Elves production team of Dan Cutforth and Jane Lipsitz (Justin Bieber: Never Say Never, Katy Perry: Part of Me). The tour documentary includes live performances from their Soul2Soul tour, as well as unprecedented access to Tim and Faith, with never before seen interviews and behind the scenes footage capturing their unmatched chemistry on and off the stage.

Soul2Soul The World Tour 2017 kicked off its 80-date North American run in New Orleans in April 2017 and has been a fan and critical success from its launch, with rave reviews and sold out shows. The tour celebrates the 10th anniversary of the record-breaking “Soul2Soul II” tour in 2006 and 2007, the highest-grossing U.S. multi-year country music tour of all time, and the first time Hill has toured since 2007. They began touring together on McGraw’s Spontaneous Combustion tour in 1996. Their inaugural Soul2Soul tour in 2000 was the beginning of their very successful Soul2Soul franchise and that year’s top grossing and most successful U.S. tour.

McGraw and Hill are currently in the process of finishing their duet album, due out this year on Sony Music Entertainment.

McGraw has sold more than 50 million records worldwide and dominated the singles charts with a stunning 43 #1 singles. He recently had three singles in the top 20 at the same time on the Billboard Country Airplay chart, a feat he was the first to achieve, and now the first to achieve for a second time. He is the most played country artist since his debut in 1992, with two singles spending over ten weeks at #1 (“Live Like You Were Dying” and the genre-breaking “Over and Over”). His recent multi-week #1 single “Humble and Kind” won the Grammy for Best Country song, spawned a New York Times Best Seller book and won a coveted Clio Award for Best Integrated Campaign. McGraw recently starred in and narrated the hit movie “The Shack,” to add to such other film credits as “Friday Night Lights” and “The Blind Side.”

Hill has won five Grammy Awards and multiple Billboard Music Awards, American Music Awards, People’s Choice Awards, Academy of Country Music Awards and Country Music Association Awards. She has consistently broken chart records with her #1 singles and has had major crossover success with the hits “This Kiss,” “Breathe,” “The Way You Love Me,” “Cry” and “There You’ll Be.” She has sold over 30 million records with only seven original studio albums, with multiple albums topping both the Billboard Top 100 and Country charts simultaneously. She has had three network TV specials that garnered top ratings and has appeared and performed on every major award show, including twice on the prestigious Academy Awards. In 2000, Faith performed the National Anthem to a global audience of over 88.5 million viewers at Super Bowl XXXIV in Atlanta and is the only country artist and one of only three artists ever to perform both “The Star Spangled Banner” and “God Bless America” at the Super Bowl. This fall, Hill, alongside former “Oprah” executive producer Lisa Erspamer, will co-produce an innovative new daytime lifestyle show based in Nashville, TN.

Magical Elves is the production team behind some of the highest-quality reality programming on television. Since the company was founded in 2001, Dan Cutforth and Jane Lipsitz have been nominated for numerous Emmys® and other awards. Now in its fourteenth season, Top Chef has been nominated ten years in a row for the Emmy for Outstanding Unscripted Reality Competition, taking home the gold in 2010. Its digital counterpart, Last Chance Kitchen, has won an Emmy as well. In 2008, Project Runway was the first unscripted show to ever be honored with a Peabody Award. The Showtime series Time Of Death also took home an IDA Award in 2014. 2011 saw the Magical Elves first major motion picture release, Justin Bieber: Never Say Never. They followed up that film in 2012 with their directorial debut, Katy Perry: Part of Me and in 2014 Under The Electric Sky premiered at the Sundance Film Festival. Most recently, the Elves teamed up with Cam Newton to launch production partnership Iconic Saga Productions and partnered with LeBron James and his production company to rebuild the city of Cleveland for CNBC with Cleveland Hustles. Other credits include: Project Greenlight, Cold Justice, Braxton Family Values, and Last Comic Standing.