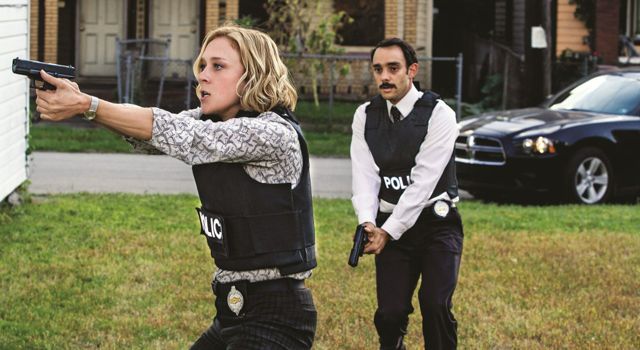 Following Bates Motel tonight on A&E is the new drama THOSE WHO KILL. Other reviewers seem to be mixed on whether this show succeeds or not, but most take one position or the other. I’m torn in the middle, seeing both the positive and negative points made. This is yet another crime drama with a few very formulaic elements and some, at-times, shoddy writing. But it’s also a heck of a character study for its lead, whom is brilliantly acted, and it does veer away from the rote procedural.

As the “Pilot” begins, Detective Catherine Jensen (Chloe Sevigny, Big Love, Portlandia) is examining a mummified corpse. Her fellow officer, Lieutenant Mike Dunn (Christopher Michael Holley, Smokin’ Aces), a seasoned veteran, doesn’t want to expend much effort on what he feels is an open-and-shut unsolvable case. The thing is, even the viewer can tell at a glance by the corpse’s painted fingernails that Dunn’s theory is wrong. Jensen, of course, bulks, finds some more clues, some with the help of her medical examiner friend, Mia (Kerry O’Malley, Shameless), and quickly gets on the trail of a serial killer.

If that paragraph made the show seem predictable, well, that part of it is. Dunn is a ridiculous cop, but one television viewers will be familiar with, and Jensen is a brilliant hero, again, another oft-used type. If there wasn’t more to this story, then THOSE WHO KILL would end pretty quickly. But that’s just the start of things.

Knowing she’ll get little support from Dunn, Jensen enlists an academic, Thomas Schaeffer (James D’Arcy, Secret Diary of a Call Girl), for assistance. He turns out to be just as weird and eccentric as she is, and together, the two come face to face with the bad guy relatively early in the episode. That doesn’t mean the case is over and everything is solved. That just means these guys are good. Very good.

Throughout this first installment, we learn little bits about both Jensen and Schaeffer that are disturbing, more so for the former, but surely more will come about the latter. Jensen cuts herself and keeps pictures of serial killers’ homes on her wall. She is obsessed with a missing brother and a mysterious father (Bruce Davison, X-Men). Schaeffer’s wife (Anne Dudek, Covert Affairs) does not approve of him getting involved in an active case, and her opinion is justified when Schaeffer gets a little too creepy putting himself in the mind of the killer, a la Will Graham in Hannibal, to a much lesser extent. His rocky, but unrevealed, past with Jensen’s boss, Frank Bisgaard (James Morrison, 24), also counts against him.

The parts of THOSE WHO KILL that work best are when the series dwells on the darker nature of its players. Yes, Dexter has already given us just about all the psychopath anyone could want, and Luther and others have played for the more complex version of the part, so it’s not really anything new. But Sevigny is just so darned good that one can’t look away from her performance, even when the script falters.

And falter it does. Besides Dunn’s unrealistic dismissiveness, there is a terribly botched capture attempt, a run-in that should have ended the episode, a few leaps of logic to move the plot along, and the setting itself of run-down Pittsburgh. Bisgaard tells Jensen she should feel responsible for every death until they capture their man, bad advice that no ordinary cop could take to heart and stay sane. But at least the main cops actually call for backup when going into a dangerous situation, and said backup arrives in a timely manner, a situation almost unheard of in the television crime body of work.

The hardest thing THOSE WHO KILL has going for it is that it’s another crime show. The genre is tragically bloated, so it’s almost impossible to add anything new to it. Networks need to stop trying, immediately and almost permanently. The good thing is that it’s paired with a show that has a similar tone and sensibilities, albeit with a bit more originality and teen angst, and the cast, especially Sevigny, is amazing. Her contribution cannot be overstated. So it has a chance. It’s certainly the second best series A&E has made, a bit above Longmire, and miles over The Glades.