Marvel Studios’ “Thor: Ragnarok,” the God of Thunder’s third installment in the Marvel Cinematic Universe, electrified both audiences and critics alike reaching over $845M at the global box office. Now the colorful cosmic adventure, loaded with action, humor, drama and spectacle, bursts into homes Digitally in HD and 4K Ultra HD™, and Movies Anywhere, on Feb. 20 and on 4K Ultra HD™, Blu-ray™, DVD and On-Demand on March 6.

In Marvel Studios’ “Thor: Ragnarok,” Thor (Chris Hemsworth) is imprisoned on the other side of the universe without his mighty hammer and finds himself in a race against time to get back to Asgard to stop Ragnarok – the destruction of his home world and the end of Asgardian civilization – at the hands of an all-powerful new threat, the ruthless Hela (Cate Blanchett). But first he must survive a deadly gladiatorial contest that pits him against his former ally and fellow Avenger – the Incredible Hulk (Mark Ruffalo) – and grapple with his silver-tongued adopted brother Loki (Tom Hiddleston), the fierce warrior Valkyrie (Tessa Thompson) and the eccentric Grandmaster (Jeff Goldblum).

BONUS MATERIAL (may vary by retailer):
Blu-ray:
• Director’s Introduction
• Deleted/Extended Scenes – Deleted Scenes: The Sorcerer Supreme, Skurge Finds Heimdall & Hulk Chases Thor Through Sakaar and Extended Scenes: Thor Meets the Grandmaster, Stupid Avenger vs. Tiny Avenger & Grandmaster and Topaz
• Gag Reel – Watch a collection of goofs, gaffes and pratfalls starring the cast
• Exclusive Short/Team Darryl – Fresh off being unseated as the ruler of Sakaar, the Grandmaster makes his way to Earth to start a new life. It’s been over a year since Thor left Australia and Darryl has been struggling to pay his rent. Now Darryl needs a new roommate to help make the monthly payments. Unfortunately for Darryl, the Grandmaster was the only one who answered Darryl’s “Roommate Needed” ad and with no viable options, the Grandmaster moves in.
• Marvel Studios: The First Ten Years – The Evolution of Heroes – Marvel’s universe is vast and transcends both time and space. We’ll examine the Cinematic Universe as a whole and revisit each of our heroes’ current location and their place in the current MCU timeline, as it all leads up to the one culminating event: “Avengers: Infinity War.”
• Getting in Touch with Your Inner Thor – “Thor: Ragnarok” director Taika Waititi has brought his unique sensibility and sense of humor to the film in a great many ways but it is the evolution of Thor’s own sense of humor, which stands out the most in the new film. This piece explores the impact Chris Hemsworth has made on the development of his widely-loved character and celebrates the mighty cast and crew who reveal the fun and hard work that went into assembling Thor’s eccentric counterparts.
• Unstoppable Women: Hela & Valkyrie – This piece explores the strong female characters in “Thor: Ragnarok,” their importance in the MCU, their incredible casting and their epic comic origins.
• Finding Korg – A tongue-in-cheek interview with Taika on casting Korg. He describes the difficult search for just the right evolution of the character design, and the nuances of this instantly classic character in the MCU. This conversation will also delve into all the extraordinary visual effects that brought Korg, Sakaar and the worlds of “Thor: Ragnarok” to life.
• Sakaar: On the Edge of the Known and Unknown – Sakaar is the collection point for all lost and unloved things. This documentary will answer all known and unknown questions while also exploring the hard work and creativity that went into creating the look and feel of Sakaar. From design inspired by Jack Kirby’s classic artwork to the dedication of the visual development team to the awe-inspiring physical and digital production, you will see this distant world come alive.
• Journey into Mystery – A deep dive story piece with the writers, director and producer Kevin Feige about the inspirations for “Thor: Ragnarok” within the comics. Most notably, the contest of champions limited series where the Grandmaster pitted our favorite heroes against one another as he does in the film. This piece also further explores Thor’s comic book origins and classic arcs through interviews with some of the most important comic creators, such as Walt Simonson and Jack Kirby.
• 8bit Scenes – Final Bridge Battle + Sakaar Spaceship Battle. Dive into these climactic sequences presented in retro video-game format.
• Directors Commentary

Digital Exclusives:
• Evolution of Thor and Hulk’s Bromance – We’ll examine this Super Hero friendship, which has spanned through several Marvel films. From their original Helicarrier fight match to the now iconic Hulk punch from Avengers 1, see how Marvel’s most powerful Super Heroes become the most extraordinary Super Hero buddies.
• Additional Deleted Scenes – Travel to Asgard & Race To The Wormhole 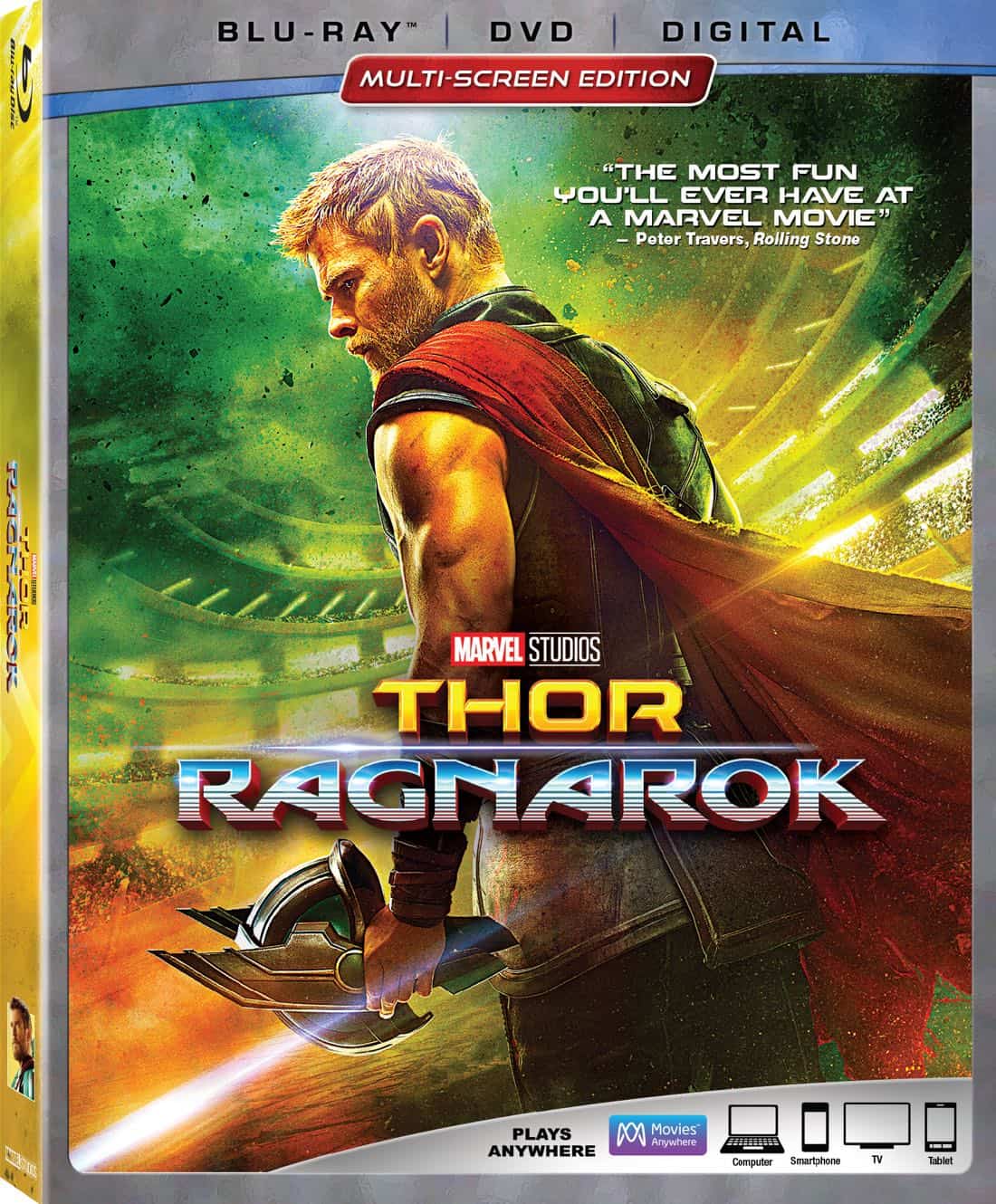 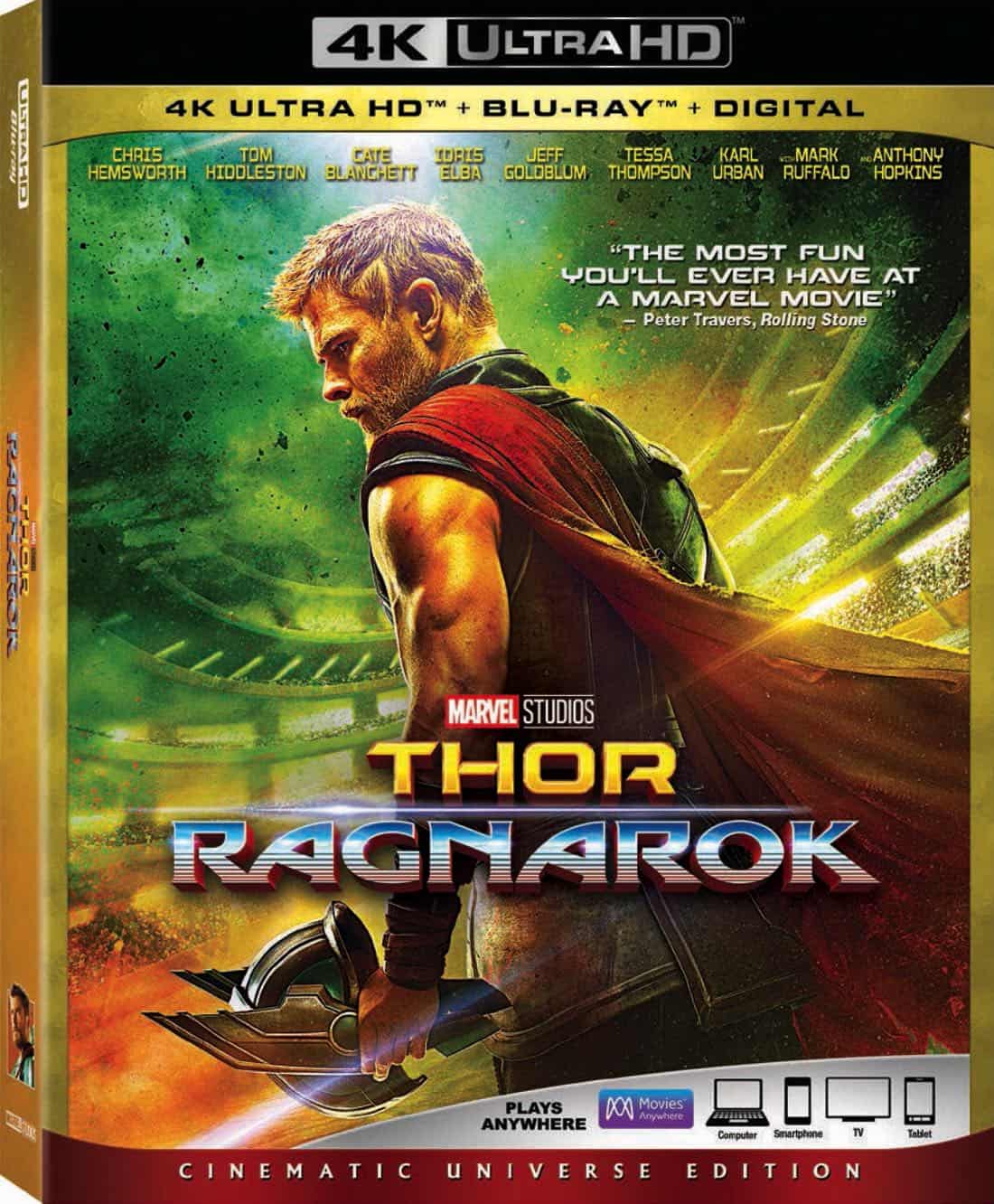