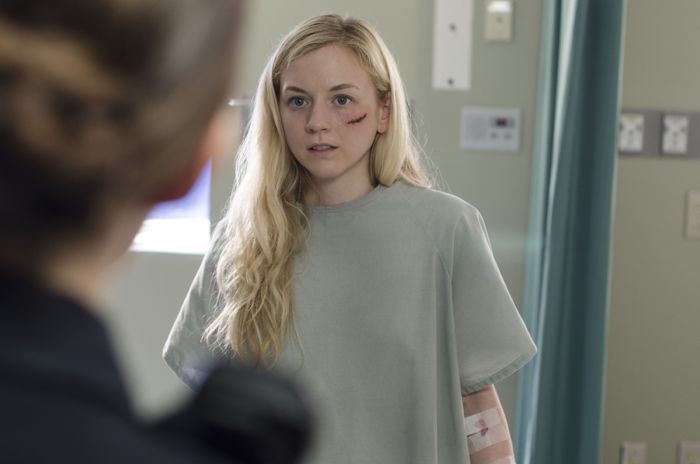 AMC’s THE WALKING DEAD finally shows us what happened to Beth (Emily Kinney) this week in “Slabtown.” Beth wakes up in a hospital run by not-completely-altruistic people. She is told she will need to work off what she owes, payment for services rendered, before she can leave. But after just a day or two, she begins to see the dark side of the place and isn’t all that sure she’ll ever be allowed to go back to her friends.

The only main character seen in “Slabtown,” other than a brief cameo at the end which we’ll get to, is Beth. THE WALKING DEAD has presented this type of hour on many occasions, and often, they are among the best since the installment is able to dig a little deeper on a single person, rather than having to split its time. But this can also be frustrating because we want to know what is happening with everyone else. When “Slabtown” doesn’t get Beth back to the others, promising at least a little more of Beth solo, it’s not quite as expected, though still a good episode overall.

We see a growth for Beth in this one. In THE WALKING DEAD as a whole, Beth has gone from meek daughter to Walker-killer. In “Slabtown,” she has a mini-arc, from cowed patient to a woman who stands up for herself and will willingly take a beating to help others. At first, she has to get the lay of the land, so she can be forgiven for her passive behavior. But by the end of the episode, we see a Beth that has earned her place in the main group, and one that no longer seems quite so expendable in the cast.

There are a number of others who populate this episode, which makes it not completely Beth-centric, but add to the world Beth is in, making it a little different than past single-character installments. Some of these people are good and some are bad and some are in between, but they’re an interesting makeup of a group, one THE WALKING DEAD has not seen before.

The hospital is run by Officer Dawn Lerner (the great Christine Woods, Hello Ladies, Perfect Couples). She’s tough, too tough, yet we also get to see the reason behind that, a woman very much struggling to hold together a failing system. This makes Dawn a great villain, one created by circumstance and weakness, not malice. Dawn’s biggest problem is that she is in denial about the current reality, and wants to keep living life the way it used to be. To do this, she makes too many compromises to keep people playing her game. Dawn will surely be back on the show again, and I’m curious to see if there’s any hope for her; I doubt it, since she’s likely to double down on her current course, even though she knows it’s not working.

More straight-forwardly evil is Officer Gorman (Ricky Wayne, Real Steel), a creep and probable rapist. Unlike Dawn, who will never be a Big Bad but does get to stick around, Gorman dies in “Slabtown,” which is as it should be. Had he lived any longer, he definitely would have forced himself on Beth, as he is already trying to do, and while rape is expected in this world, no one wants to see a beloved character undergo it.

Beth’s one friend in the place is Noah (Tyler James Williams, Everybody Hates Chris, Go On), the janitor. He tells her the truth, unafraid of being caught and determined to get out. This is a kindred spirit for Beth, someone brave and dedicated to escaping the prison. They work together to get out and Noah manages to, even if Beth doesn’t. I hope we see him again as he’d make a fine addition to the company.

Noah’s plot gives me a theory about who Daryl (Norman Reedus) has in the woods last week. Might it be Noah? Daryl is following a car to the hospital so he’d be around that area not long after Noah escapes. Maybe Noah can tell the group what has become of Beth and how horrible the hospital is and Rick (Andrew Lincoln) will lead an assault to rescue our missing girl.

This theory also works with the end of “Slabtown,” which sees Carol (Melissa McBride) end up in the hospital, too, injured. She looks like whatever happened to her is survivable, and her presence here explains why she isn’t with Daryl. Although an alternate theory is that Carol purposefully got hurt to get inside to rescue Beth while Daryl (and possibly Noah, who’d just have time to meet them prior to this) are waiting outside to provide support.

But those are just theories. We’ll see.

The final important character in “Slabtown” is Dr. Steven Edwards (Erik Jensen, Gravity). He positions himself as an ally to Beth, protecting her from abuse, but he also plays by Dawn’s rules, content to be terrorized a bit in exchange for protection. He’s a wimp and he knows he won’t survive on his own, so he stays here, thinking it better than the alternative.

One can understand why Beth ends up not liking Dr. Edwards, who kills to keep his position, but should he himself be murdered? The end of the episode has Beth headed towards stabbing him until Carol is brought in and distracts her. I get that Beth is potentially saving other lives, should another medical professional be brought in that Dr. Edwards would kill, too, but he helps a lot more than he hurts, and Dawn would take serious revenge on Beth for the act. Shouldn’t Beth stab the cop first?

That’s really my only gripe in an interesting episode. It’s not the best single-character story, but it is one that fits well with this part of the series, which will contain other mini-arcs before the characters get to D.C., and it gives us another side of Beth, one which earns viewer respect. Plus, Noah is a welcome addition.