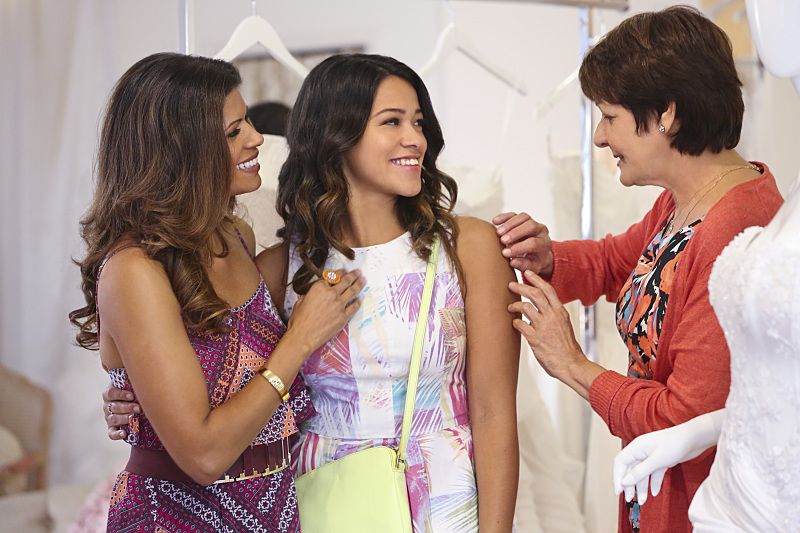 In another awesome and fun episode of the CW’s new series JANE THE VIRGIN, Chapter 4 introduces Michael Rady, as Lachlan who is both a business rival of Rafael (Justin Baldoni) and an old flame of Petra’s (Yael Groblas).  So as both Rafael and Petra’s worlds are tilted by the Lachlan’s unexpected arrival, Jane’s (Gina Rodriguez) own world also takes a bit of a whirl — with both a sex dream that she feels compelled to reveal to her fiancé (even though he’s not in it), and her upcoming wedding, which is causing just a bit of hyperventilation as well.

Jane just thought finding out she was pregnant on the same day she found her fiancé Michael (Brett Dier) proposing was difficult enough.  But finding out that the biological parents of her baby are her old crush Rafael and his wife Petra, the possible lawsuit against Rafael’s sister for the pregnancy mix-up, and the fact that her fiancé Michael is behaving a bit out of character with secret rendezvous with Petra behind her back has Jane spinning in several directions at once.  There is also the fact that her favorite soap idol keeps popping up in her life is also making Jane wonder just what is going on in the universe.  Things are happening to fast and are seemingly all coming her direction all at once.

Is it any wonder that Jane is out of breath and having panic-attacks?  Just what is she to think of a sex dream about another man instead of Michael, her fiancé?  It is enough to make Jane wonder whether she developing feelings for Rafael and if that mean she needs to postpone the wedding.

Throwing a bit more fuel to the fire is when Rafael approaches Jane to help him write a business proposal and the unintended consequences of that innocent request turn up the heat even more than either of them could have expected.

But because this JANE THE VIRGIN, nothing ever goes quite as expected and the unexpected is simultaneously charming and hilarious.  In fact, each time life throws lemons in Jane’s direction, she manages to whip up the most delicious batch of lemonade out of it.  Her positive outlook in the face of utter catastrophe and the most outrageous of circumstances makes her the heroine that we are all rooting for.

Just wait ’til you see how deliciously Jane’s version of lemonade turns out this week as she deftly juggles a sex dream, a shocking and surprisingly revelation, and trying to keep Rafael at arm’s length when fate seems determine to keep throwing him in her path in an all new episode of JANE THE VIRGIN on Monday, November 3rd at 9:00 p.m. on the CW.  (EMILY OWENS, M.D. fans will be delighted to welcome Michael Rady to the show in his dashing new role.  He is likely to steal your heart once more!)