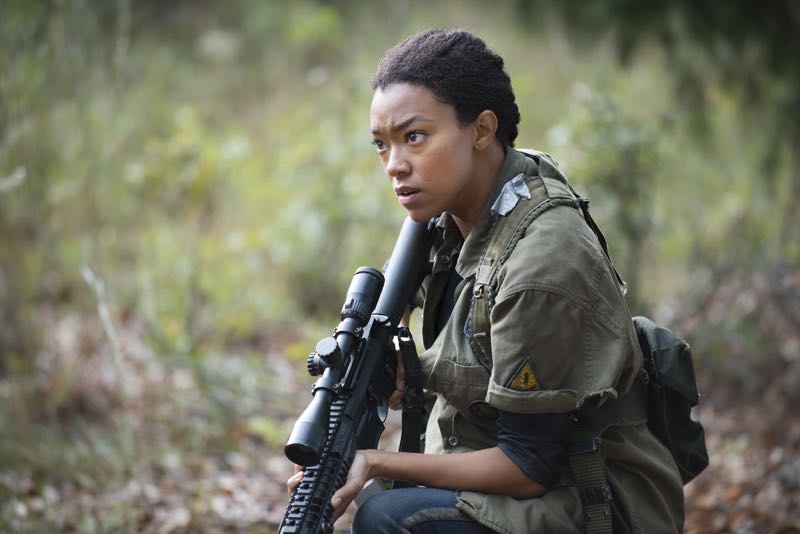 Coming off of last week’s episode, in which the characters try to “Remember” who they were before the collapse of civilization, this week’s installment of AMC’s THE WALKING DEAD makes the time to “Forget” the past few years. The members of the group try to settle into a normal life in Alexandria. To help with that, Deanna (Tovah Feldshuh) organizes a mixer in which the newbies can meet their neighbors. This doesn’t go well for everyone, but it’s a start.

Coming out of “Remember,” Daryl (Norman Reedus) is the character I am most concerned with finding a place for in the new world. At the start of the hour, he makes a plan with Rick (Andrew Lincoln) and Carol (Melissa McBride) to steal some guns just in case they need to fight back, singling themselves out as the protectors of the rest, who are being urged to adapt to the new circumstances. But then Aaron (Ross Marquand), either on his own accord, as he claims, or under Deanna’s orders, because that woman is smart, asks Daryl to be his new recruiting partner. And Daryl finds his place.

Daryl is someone who longs very much for acceptance, even if he’ll never say it out loud. He’s not the type to display his emotions too freely, but he definitely feels them deeply. He needs the extra invitation Aaron offers in order to relax a bit. His self esteem is beaten down over many years, and now it’s still just a little fragile. But unlike the horse the men track, Daryl has a brain and doesn’t necessarily run from those who want to help him. Aaron approaching Daryl as he does, praising his skills, offering him a position in which he can make a contribution but not lose who he is, is the perfect way to handle Daryl. Daryl is so committed to making Alexandria work that he refuses to take a gun from Carol at the end, which might be a good thing.

Now, Sasha (Sonequa Martin-Green) is the problem. She shoots up pictures of the family whose house she now lives in. She stays away from the group, and has an outburst at the party. Deanna does reward her with the solitary look-out duty she wants because she knows Sasha is trying, but the fact that Sasha just wants to hide away isn’t good, and Deanna doesn’t seem willing to let that stand. Sasha must try harder.

Most of the rest of the group enjoys themselves at the party and blends. The Alexandria residents are friendly enough, and this is their home now. Maggie (Lauren Cohan) has a place in a new government. Michonne (Danai Gurira) even hangs up her sword after some sage, drunk advice from Abraham (Michael Cudlitz). This really is a place they in which can make a fresh start.

But there are still dangers brewing. Rick and the others are justifiably concerned about the lack of security in Alexandria. The walls keep out the Walkers, but as our people know all too well, the Walkers aren’t the biggest danger out there. Having people walk the perimeter and staffing the clock tower will help, but they’re still vulnerable. Plus, Rick is trying to start something with Jessie (Alexandra Breckenridge), a married woman, since he sees himself as king of the land, and I think Abraham might have an alcohol problem, so those are likely problem spots, too.

Finally, there’s Carol. She plays nice better than anyone, offering cookies, compliments, and smiles. However, she’s dark, the person most concerned with getting the guns, and she isn’t as invisible as she thinks, her kindness attracting too much attention. Carol threatens a boy who catches her taking the guns in a very chilling scene that I can’t help but think there will be repercussions for. Carol can’t keep up the charade forever, and I think the people of Alexandria will feel incredibly betrayed when they find out she’s lying to them. “At least she didn’t kill him” is not an excuse the residents are going to accept. This Carol is necessary outside the wall, but she may not be within, if the group really does want to join Deanna’s people.

“Forget” is about forgetting the past, but more than that, it’s about the future. From issues petty to large, The Walking Dead gang has changed, for better or for worse. This is a new chapter for them, a new life, and it won’t be easy to adapt, even if it seems so for some. There is also a balance of adapting too much and growing soft, leaving them vulnerable to others. Hopefully, this will not happen, but that is always a danger. It’s incredible to watch the meaty, dramatic, character-driven moments this new setting provides, and to see the various way in which individuals handle it.