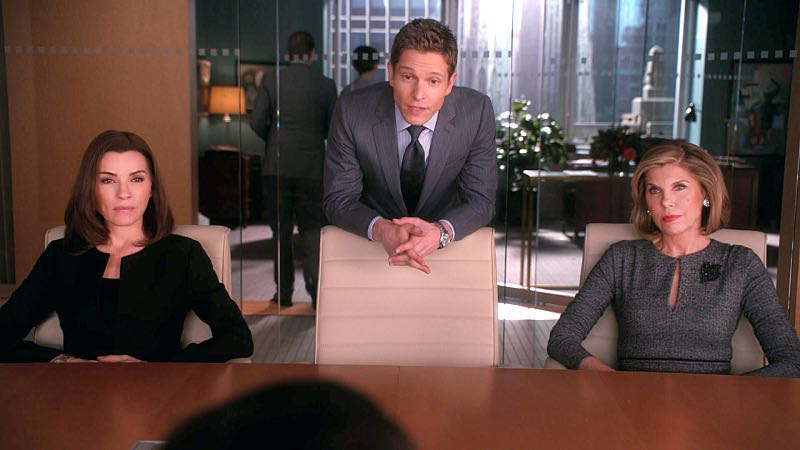 This week’s episode of THE GOOD WIFE on CBS, entitled “Mind’s Eye,” is really great, and also very different than any other episode of the series, if not of television in general. A large portion of the hour plays out in Alicia’s (Julianna Margulies) imagination, rather than in reality. This is not a fantasy in the traditional sense, though, nor a musical extravaganza. Instead, the series takes us through her thought process on several issues, sometimes interconnecting, showing possibilities play out and how she comes to the conclusions and decisions that she comes to.

First off, Alicia is preparing for an interview to secure a major endorsement that could win her the State’s Attorney election. Prady (David Hyde Pierce) does very well with his own attempt, making her nervous. She has reason to be concerned. What if they ask about her son, Zach’s (Graham Phillips), abortion? What is they ask her is she’s aware her PAC is being funded by drug kingpin Lemond Bishop (Mike Colter)? Should Alicia tell the truth, or play the politician?

Secondly, Louis Canning (Michael J. Fox) is still suing the firm and threatening to publicly smear Alicia just before the election. Canning is smart, likely having his former partner, David Lee (Zach Grenier), in his pocket. He also milks his health issues for all they’re worth. But when he does turn out to be very sick, Alicia rushes to the hospital, putting her compassion for a human being ahead of her rocky relationship with the jerk of a man.

Both of these intersect, giving her ideas for the other. They are not obviously related, but the mind is good at making connections. People are hard wired to find patterns, and the smartest ones, like Alicia, use that to their advantage. Her jumping back and forth from one notepad to the next, scribbling ideas as they come, is impressive to watch and inspiring. This isn’t just an experimental, cool look into human psychology, but also gives us a deeper insight into a particular beloved character.

This being The Good Wife, romance does come into play in “Mind’s Eye.” Alicia has been unable to move on from Will (Josh Charles), although she has two possible suitors at present, Finn Palmer (Matthew Goode) and Johnny Elfman (Steven Pasquale). This episode has her find a way to let go of Will, finally opening herself up to new possibilities. It’s time, and I’m glad to see Alicia hasn’t given up on finding love.

Charles doesn’t actually appear as Will in the episode, his appearances shrouded in shadow, though the actor’s voice is clear. This might be because of a scheduling conflict, but I think it works out rather well as it’s done. Will is fading, becoming an indistinct memory, and she doesn’t need to have him firmly locked in her mind.

There are also a ton of little, juicy tidbits tossed into “Mind’s Eye.” Alicia imagines Kalinda (Archie Panjabi) and Peter (Chris Noth) together, proving she’s never forgiven her former friend and husband. She sees Richard Dawkins (Michael Siberry) and Pastor Easton (Gbenga Akinnagbe) as she struggles with religion and morality. Sometimes the people in her head turn and talk to her. And, as has become frequent, Marissa (Sarah Steele) pops in to give terrific one-liners and insights. She should be locked into the cast full-time immediately.

Throughout “Mind’s Eye,” Alicia is having trouble finding her voice, both figuratively and literally. She doesn’t know what she wants to do. But at the conclusion, when she makes up her mind, her voice comes back. She compromises with herself and decides what she thinks is best, which often isn’t clear-cut in complex, adult decisions. It’s quite a clever little metaphor that adds to the enjoyment of the immensely enjoyable piece.

Not a lot happens in “Mind’s Eye,” yet it’s one of my favorite episodes of THE GOOD WIFE this season. It shows once again how the series is willing to take chances and make bold choices. This series is on the bubble this year, but I desperately hope it is renewed because it is probably the best show on the broadcast networks, certainly one of the most original, and every week I anticipate it greatly.