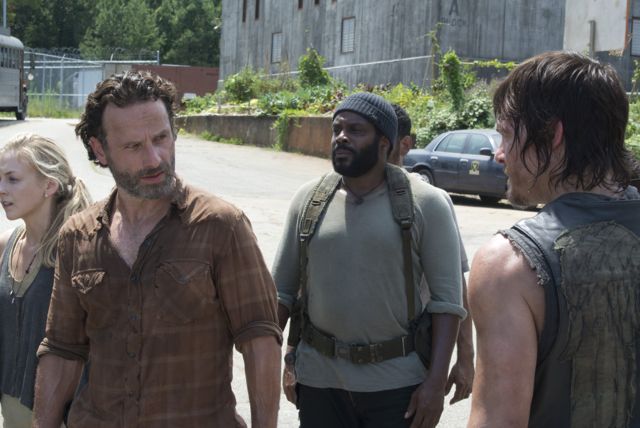 AMC’s THE WALKING DEAD paused for two months with the climatic mid-season finale, “Too Far Gone,” last night. The showdown went pretty much as expected, with some key players breathing their last and a heck of a lot of action. Which does not detract at all from the tension as events unfold, bullets are fired rapidly, and bodies hit the floor.

The Governor (David Morrissey) easily convinces his new camp to attack the prison, and who wouldn’t be convinced by him? He’s a smooth talker who is very good at persuasion. The story that he tells, taken at face value, seems very reasonable, and it’s not surprising that people who have only seen one side of him, a softer side, would fall in line. Especially when his plan supposedly will not involve bloodshed.

Yet, for those of us who have watched The Governor all this time, it’s certain that no matter what he says, this is not how it will play out. When Rick (Andrew Lincoln) doesn’t kowtow to The Governor’s demands, the choices for the one-eyed leader are to compromise or back off. He has never been good at doing either, and faced with these people who took so much from him, he cannot bring himself to do so. Instead, he attacks.

Has The Governor changed? Hershel (Scott Wilson) says he sees development and Rick appears willing to forgive and forget, to a point. The Governor himself does give the prison group a chance at life, which seems like something his self at the time of Woodbury would never have done. I think there has been a shift here.

In some ways, he’s still the same, though. The Goveror will not accept Rick’s offer. One can argue that The Governor knows Michonne (Danai Gurira) would never let him live, and sharing the prison is too dangerous for his own personal safety. However, he could have negotiated specifically about Michonne and found a way around this. If Rick and Hershel supported him, The Governor may have brokered a deal. It may have ended with Michonne striking out on her own, but there would be peace.

There are others in The Governor’s group who probably wouldn’t fall in line, even if The Governor had accepted Rick’s terms. Mitch (Kirk Acevedo), for one, would probably have caused trouble within the encampment and eventually would have had to be dealt with. Most of the others would have been fine, folding into the group the way the Woodbury survivors have done.

Either way, the catalyst for violence is The Governor. In a moment of anger, he slashes Hershel’s neck with a blade, unable to take Rick’s offer at face value, or take it at all. He’s just “Too Far Gone.” There is no way the prison group, who loves Hershel dearly, can take this, and so fighting breaks out, resulting in many, many deaths, including practically all of The Governor’s followers.

The Governor himself is taken down by a combination of Rick, Michonne, and Lilly (Audrey Marie Anderson), which seems appropriate. He’s a big villain, and huge measures must be taken to stop him. Rick and The Governor have had their differences, and so deserve the chance to slug it out. Rick, weakened, would lose this hand-to-hand combat if not for Michonne, who has more reason that practically anyone to hate The Governor. She was willing to give up her vendetta, but with The Governor right in front of her, killing her friend Rick, it must be satisfying to run him through with her sword, as she does.

Lilly gets the last blow in when she shoots the severely wounded Governor at close range. Even before The Governor shoots Meghan (Meyrick Murphy), who has been bitten, in the head, Lilly senses something off about him. As the woman who is closest to him, she sees the change within, the secrets he tries so hard to keep buried. He has personally betrayed her by deceiving her, and she puts him down for it, showing strength it may not have been obvious she had.

Funnily enough, it’s Lilly’s sister, who always seems so tough, that cannot fight. Tara (Alanna Masterson) is fine with The Governor’s plan until the guns are used, and then she flees. Her bravado is a façade, or maybe she just has a moral compass that only allows her to be tough towards those who deserve it. She alone of The Governor’s army escapes, as far as we know, because she runs. Let’s hope Tara and Lilly, who seem like good people, get to join our heroes, though they may be loathe to do so after witnessing so much violence, desiring to stay away from everyone involved in the battle.

Mitch is taken out by Daryl (Norman Reedus). This seems a great match, a lieutenant-to-lieutenant fight, the second-in-commands of both camps facing off. Given the personalities and skill sets of each, though, it’s with little surprise that Daryl handles Mitch quickly and easily, not as even a pairing as their positions might indicate.

Rick is made to be a leader again in “Too Far Gone.” The Governor forces Rick to step forward and deal with him, even though the power in the group has shifted away from a lone person. The thing is, though, Rick is the de facto leader left. With Carol (Melissa McBride) cast out and Hershel dying of a mortal neck wound, the council is in tatters. The others who help lead are not prepared to deal with The Governor, nor do they show any signs of wanting to. When the going gets tough, everyone still looks to Rick to save them. Which he sort of does.

Rick handles it better now. He’s had time to heal and reflect, and while some may take his willingness to cooperate with The Governor as weakness, neither does he back down completely by giving The Governor the prison. He strikes the perfect balance of sanity, compassion, and ferocity. This is who the group needs in charge of them.

If there’s a group to be had any more in THE WALKING DEAD. As the gates of the prison come down, everyone runs in different directions. Some, including the sick like Glenn (Steven Yeun), who aren’t able to fight, take a bus through a previously arranged backdoor exit. Others leave in small groups, still firing their weapons. A few are injured, but have others with them to protect them. This means it may be some time before they reunite, even if they have a pre-established rendezvous, which seems probable.

Rick and Carl (Chandler Riggs) get away, but in the process they come across Judith’s bloody baby carrier. Is the infant dead? It seems likely, given the evidence, though there’s always the chance she was taken out of the seat for some unknown reason and then a Walker stepped in it, resulting in the blood we see. In the comics, this is when Judith is killed, albeit in a different way, so that’s another strike against her survival.

Judith should have been taken to the bus by the other kids, but they were convinced to arm themselves and fight by Lizzie (Brighton Sharbino). One has to admire her pluck, wanting to be a fully contributing member of the group and taking Carol’s lessons to heart, but it’s also a very stupid move. She’s no Carl, and doesn’t have the presence to pull it off, surviving through luck more than talent. Not being an able leader of the others. If Judith is dead, it’s Lizzie’s fault.

Plus, now Tyreese (Chad L. Coleman) has to look out for Lizzie and her friends. Lizzie shoots Alisha (Julianna Harkavy), Tara’s girlfriend, saving Tyreese’s life, which is a good thing. But then Tyreese is stuck with several young girls who have been left behind by the larger group. That may not be an easy challenge for him, as we haven’t really seen him around the kids at all.

Especially if one of them proves to be a psychopath. We still don’t know who was feeding the Walkers rats at the fence, though that mystery deepens when Tyreese discovers a dissected rat in the prison. Lizzie seems the obvious choice, though perhaps she’s too obvious a culprit. Either way, there is someone crazy within their midst, and if Tyreese is trying to protect a few children, this will be a challenge he doesn’t need right now.

Perhaps, while scattered, Daryl with find Carol. He seems to accept her banishment OK early in “Too Far Gone,” but that doesn’t mean he doesn’t still care about her. If he’s on his own, or with only a couple of others, it seems a logical move to look for Carol, who can help take care of anyone that needs it. Carol is not in this episode, however it seems highly unlikely she’s done for the season.

Losing Hershel, who is gone for good, is a rough blow. Not just for Beth (Emily Kinney) and Maggie (Lauren Cohan), his loving daughters, but for Rick and everyone else. He was a wise elder, giving good advice and caring for the sick, the only one left with medical training. Hershel’s death presents practical, as well as emotional, issues for the group. He will be deeply missed.

It is kind of surprising that Hershel is the only main character good guy that dies here. With practically all of The Governor’s group taken out, one expects some equal losses on Rick’s side. Aside from a few nameless extras, this doesn’t happen. There are enough bodies to satisfy those just looking for death, but very few really matter in the larger scheme of the story as much as Hershel (and the prison itself, which is now uninhabitable, overrun with Walkers). It may mean more that Hershel goes down alone, but it also stretches the realism just a bit too much.

Overall, that’s a minor gripe, and “Too Far Gone” is a fantastic ending. Carol and the mystery psycho leave hanging threads for the second half, the scattering of the group provides some interesting new plot to start back with, and the stakes are very high, resulting in some very real, lasting losses. It’s a heck of an installment, one that will not be soon forgotten, and a fitting end for the biggest bad the show has produced yet.

THE WALKING DEAD will return the first Sunday in February to AMC.