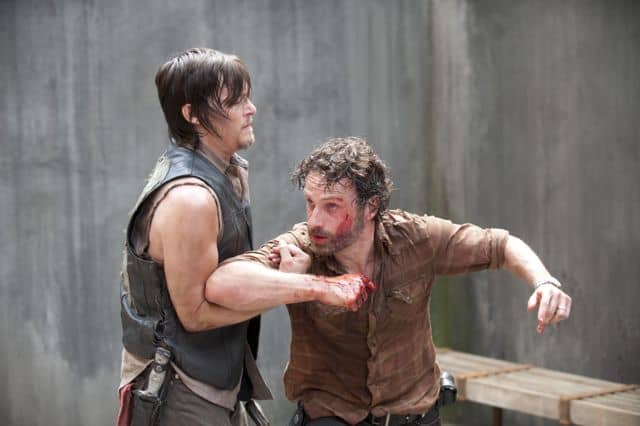 Three episodes into the fourth season, AMC’s THE WALKING DEAD only continues to get more intense. The latest installment, “Isolation,” finds the prison population continuing to struggle with the illness that had taken hold, more and more people displaying symptoms. Separating the infected from the others isn’t helping, and the possibility of antibiotics is far away. Also, Tyreese (Chad L. Coleman) wants Karen’s killer found.

It’s understandable that Tyreese desires justice, and no one wants to deny him that. This just isn’t the opportune time to investigate, with a major crisis going on. Daryl (Norman Reedus) and Rick (Andrew Lincoln) try to explain that to him, but Tyreese is not in any position to hear, his mind extremely one-track at present.

We don’t know a lot about Tyreese yet. He’s portrayed as caring, compassionate, and non-violent, but something about Karen’s death makes him snap. He slugs Rick, which earns him a beating. Then, later in the hour, he hesitates to engage in battle with walkers, only to come out slaying in a massacre-like fashion. Does this man have anger issues he is trying very hard to control? Does he know he can be dangerous and deadly under the right circumstances, and fights against that nature? This is a new side of him.

Tyreese’s power could be quite useful. The group could use someone who can kill dozens of walkers while managing not to get bit themselves, a moment reminiscent of the comics. But if Tyreese resists the urge to act like this, he’s not really helping. And the question is, if he gives into the rage, might it unleash something he can’t control around people, as well as walkers?

Rick has the same rage-addiction, though perhaps is not as big or strong as Tyreese, and so poses less threat. Rick still has enough strength, though, to beat up Tyreese, who is not fighting back at full power, leaving Tyreese with a black eye. Rick would do worse if Daryl didn’t pull him off, not intending to stop wailing on Tyreese himself.

What about the apocalypse triggers such extreme reactions? Rick has been through a lot, sure, but he wasn’t particularly violent prior to everything going down. Now, he’s spent months acting like a farmer and trying to control himself, as well as set a good example for Carl (Chandler Riggs), which is working, at least for his son, Carl resisting the urge to unnecessarily kill walkers. Is Rick really still so on edge that he can snap again at a moment’s notice? Or does he just need to be careful not to fall back into familiar habits until they become unfamiliar, which may take a while longer?

“Isolation” finds way too many people getting sick. Pretty much all of the newbies, including Sasha (Sonequa Martin-Green), Doctor S. (Sunkrish Bala), and Lizzie (Brighton Sharbino) are ailing, and soon Glenn (Steven Yeun) comes down with it, too. Is this what will wipe out the heroes once and for all? Not walkers or a murderous governor, but a microscopic disease?

This is expounded upon in dialogue, with Glenn lamenting the situation. He’s right that this sucks, something they can’t easily fight after all the struggles they’ve been through. Yet, it also makes sense, a bunch of people living in close quarters without the modern hygiene and disease prevention techniques they were used to prior to everything falling apart. It’s a really frustrating danger, with no clear solution.

Everyone deals with this in a different way. Beth (Emily Kinney) tells Maggie (Lauren Cohan) that they’re not allowed to be upset and worried. Hershel (Scott Wilson) risks his life getting herbs, then further endangers himself by personally delivering the folksy medicine to the patients. I can’t see any of these being a “right” or “wrong” approach. Yes, Hershel may be putting himself at an unnecessary risk when the group needs people to stay fit. But it also shows the depth of Hershel’s caring to be so unworried about himself. And Beth can’t be blamed for wanting to turn her feelings off, having suffered enough, but is she losing her humanity?

I love that THE WALKING DEAD poses questions like this without answering them. It depicts a great many different personalities, each of which has different thoughts and beliefs. We are allowed to observe and make our own judgments, with much open to debate. The strength of the series is in sparking those conversations and making their viewers think for themselves, rather than explicitly telling us what should happen. Even after a decision has been made by a character, we don’t know if it’s the right one, and it could come back up later on.

For instance, Rick determines that Carol (Melissa McBride) is the person who killed Karen. Carol freely admits this when questioned, then walks away without further comment. Without being told, fans know that Carol killed Karen to try to stop the illness from spreading, in the name of protecting everyone. Yet, Rick, as a lawman, might feel the need to punish Carol. Or at least tell Tyreese. And we don’t even know how Tyreese will react when he finds out, as he clearly holds Carol in high esteem earlier in this hour. Carol’s actions wills have consequences, but she might have been in the right, even if the disease still continued its rampage. Even if she is correct, can she be forgiven?

If Hershel’s natural remedy doesn’t pan out, the only hope is to get medication, which could possibly be found at a veterinary hospital fifty miles away. Daryl, Michonne (Danai Gurira), Tyreese, and Bob (Lawrence Gilliard Jr.) set off to retrieve the life-saving antibiotics, but run into a megaherd of walkers. They are forced to flee their vehicle, meaning it will take much longer for them to obtain the drugs and get home.

I feel like they might be too late, at this point. People are dying within a day or two, not lasting weeks. Fifty miles is a lot of ground to cover on foot. They may find an alternate mode of transportation, but not even having made it to the college yet, it looks like they still have a distance to travel.

Also, when did the walkers form such huge herds? Megaherds are something the comic deals with later in the story. This has to be a sign that the show will go there, too, eventually, if not right away. A megaherd is not something easily turned away, and we’ve seen what a much smaller group can do to the prison’s fences. This kind of threat is super deadly, and if it reaches the group’s stronghold, I don’t see how they could possibly defend against it. This may be why the prison must be abandoned.

Lastly, before leaving the car, the supply party hears a voice on the radio. This means other survivors are out there, nearby. That makes sense, given that the main characters have run into others before. But it also looks like they won’t be able to stay “Isolated” much longer, if others are actively seeking out survivors. Will this be another Woodbury situation, or might the new people offer assistance?

“Isolation” is a busy hour, with a lot of developments and implications for future events. It’s an excellent installment, full of exciting drama and moral quandaries. Let’s hope the show stays this good.