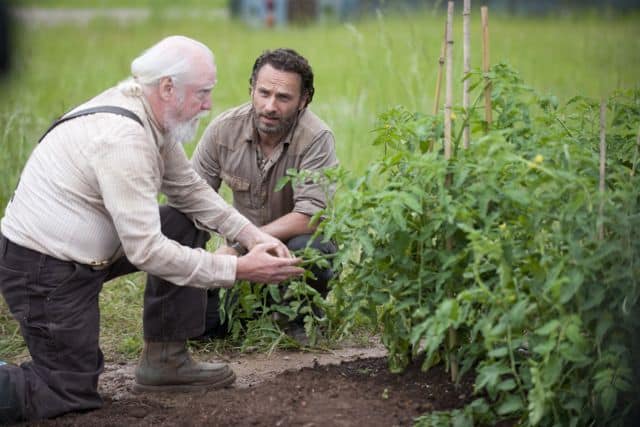 It’s been months for both fans and the characters of AMC’s THE WALKING DEAD since the last new installment. So in this week’s season four premiere, “30 Days Without an Accident,” it’s not surprising that things have changed. The group is now under the leadership of The Council, rather than a single man. New recruits have been welcomed. There’s a school and children present, as well as crops and livestock. It seems things are finally getting good for the survivors.

Of course, by the end of the hour, that has started to change, but we’ll get to that. First, what this episode revealed about our heroes.

Daryl (Norman Reedus) is happy! He is part of the leadership for the prison, his romance with Carol (Melissa McBride) has clearly progressed, and young’uns like Patrick (Vincent Martella, Phineas and Ferb, Everybody Hates Chris) worship him. Daryl still goes out on raids, but that allows him to feel important and needed. Even bringing home a deer wins him admiration and appreciation, so he has been fully accepted by those he cares for.

This is a shift from wounded loner who follows orders. This is a step up for the guy who really deserves a break. If anyone wasn’t getting what they should be getting in this new world order, it was Daryl, so it should please fans to no end that his station has improved.

And he’s not the only one. Carol is running a school. Tyreese (Chad L. Coleman) has a girl, too, Karen (Melissa Ponzio, Teen Wolf), and gets to decide if he wants to kill walkers at the fence or go on supply runs, neither of which he enjoys, but the choice is his. Carl (Chandler Riggs) is acting like a kid and obedient son again, and gets to bond with Michonne (Danai Gurira) over trivial things such as comic books. Rick (Andrew Lincoln) has settled into farming under Hershel’s (Scott Wilson) tutelage. All is right in the world.

One would think that these characters wouldn’t relax. They’ve been comfortable before, on a farm no less, so why should this time be any different? I think they’re likely feeling secure because this is an improvement over other places, with a larger contingent and stronger barriers. But they shouldn’t take it so easy that they lose their edge.

Glenn (Steven Yeun) realizes this. He hopes Maggie (Lauren Cohan) isn’t pregnant because he doesn’t want to bring a child into this disaster. This, despite the fact that there are relatively normal children in the group already. Still, Glenn has been burned before, and he’s not about to just sit back and relax.

Carol, too, has a sneaking suspicion. Although not as overt about her concerns as Glenn, she secretly instructs the children of the compound on knife fighting after story time. It’s not a bad idea, of course; anyone living in the walker world, even kids, should know how to defend themselves. But it’s telling of everyone else’s complacency that Carol doesn’t make her skill session publicly known.

Glenn and Carol have a right to be concerned. There are walkers pressing against their fence, more every day, and starting to gather in select places, making the barriers less than sure. Is this a sign of growing hoards coming together, something the comic book version faced, or is something else afoot, with the walkers being lured there, as Nathan Fillion suggested during the aftershow, Talking Dead?

And there’s trouble within. A pig, whom Carl names Violet, is sick, and then so is Patrick. Is there a new virus threatening our heroes? Why now, and where did it come from? Isn’t it enough that they have to fight walkers and psychos like The Governor (David Morrissey), who still hasn’t been seen again yet, but will be soon enough? Do new and sudden illness have to present a problem, too, and how will they defend against them?

THE WALKING DEAD is a story of survival, so I guess it’s not surprising that these dangers must come, even on the heels of so many other threats. These characters face anything and everything, and it’s their ability to persevere that is admired and celebrated. They wouldn’t earn such respect from viewers if the path were an easy one. And while “30 Days Without an Accident” may not be extremely action packed, there is definitely promise (and plenty of rumor from those involved with the show) that this is just the calm before a very intense storm.

Is Beth (Emily Kinney) the most emotionally prepare to weather such events? She seems uncaring when Daryl tells her that her boyfriend, Zach (Kyle Gallner, Veronica Mars), dies in a raid. Admittedly, Zach’s demise is a cool one, with a literal raining of walkers and a helicopter crashing through the ceiling of the store the supply run party is in. But for Beth to be so callous is sad. Yes, death is a part of her life, but has she turned humanity off completely?

Rick also faces someone who may have forgotten what it is to be human, a girl named Clara (Kerry Condon, Luck, Rome). Clara looks a bit like a walker herself, dirty and disheveled, clothing in tatters, hunched over and not walking so well. Of course, that’s because she’s been alone in the woods with her love’s walker-turned head in a bag, so anyone in her shoes would go crazy, as she clearly has.

Yet, this speaks to a greater trend, the slipping away of what makes a person a person, and a new kind of moral compass. One of the themes of the series has long been how far can one go and retain who they are? What kind of changes must one make to adapt to this new lifestyle, and is life still worth living after those sacrifices are made? These questions aren’t answered, but “30 Days Without an Accident” gives us much to ponder.

There are still the old-fashioned problems, too. Newcomer Bob (Lawrence Gilliard Jr., The Wire) is definitely wrestling with alcoholism. But that may be the least of his problems for the time being.

I don’t know that I’d count “30 Days Without an Accident” among my favorite episode of THE WALKING DEAD. However, it does a good job resetting the stage, and I’m glad the show slows down enough to show us the new normal before ripping it apart again. There are some intriguing new characters and surprising problems, and it’ll be interesting to see how both are dealt with in the coming weeks. Plus, the visuals of the raining walker scene are cool, and Clara is very artistically created, with clues to her intent before her true nature is revealed, such as the shot of a spider and its web. Neat.