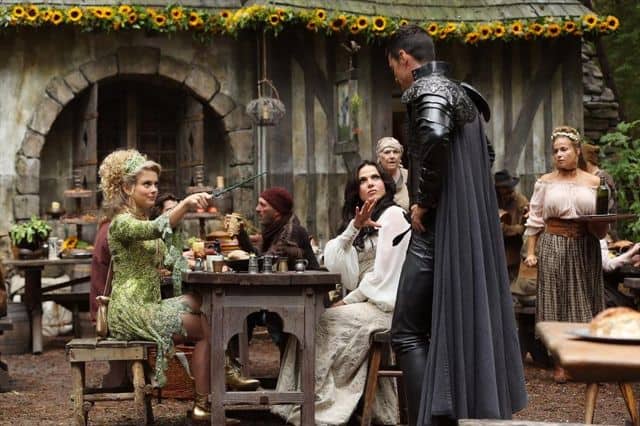 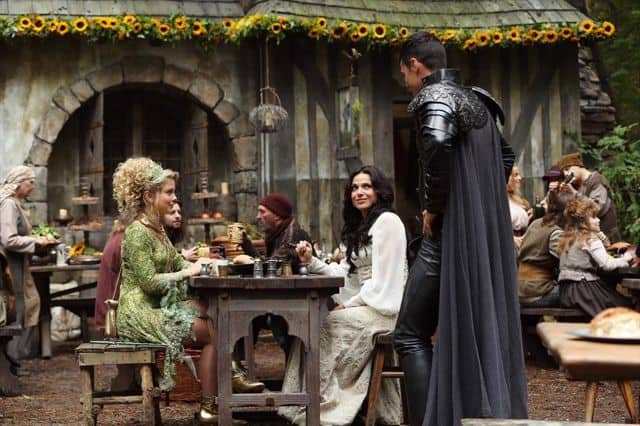 This week’s episode of ABC’s ONCE UPON A TIME is called “Quite a Common Fairy.” The Operation: Save Henry team in Neverland search for Tinker Bell (Rose McIver, The Lovely Bones), hoping she can help them gain access to where Henry (Jared Gilmore) is being held. Unfortunately, Regina (Lana Parrilla) has a past with Tinker Bell, and that may make the fairy pretty unmotivated to help.

ONCE UPON A TIME frequently takes license in putting its own spin on the traditional telling of a familiar tale. However, I am not sure how Tinker Bell fits into the current understanding. She is in the Enchanted Forest realm when the Blue Fairy (Keegan Connor Tracy) takes away her powers and wings, then is seen as a normal human in Neverland. So has Tinker Bell never been a fairy in Neverland? Or, is the Enchanted Forest the second chance the Blue Fairy spoke of, and Tinker Bell was a fairy in Neverland earlier before screwing up somehow? Maybe by trusting Pan (Robbie Kay) when she shouldn’t have? We know Tinker Bell has a complex to save those who have gone bad, based on this episode. This definitely begs further exploration, even if Tinker Bell is not a major character, only putting in her first appearance here.

It’s pretty cool that Tinker Bell is tied into the existing fairy world, though. Viewers have gotten to know the Blue Fairy fairly well, and we’ve seen her interact with others of her species. It makes since for Neverland’s famous fairy to not only be running in that social circle, but also to not quite fit in, given her isolation and separation from the group. This is very well handled.

Tinker Bell wants a home. She has been abandoned by many, and not found her place. Snow and Charming (Ginnifer Goodwin and Josh Dallas, who recently got engaged off screen) offer her this in exchange for her help. It’s kind of fun to see the pair take in yet another stray, but it seems to be their specialty, and it certainly wouldn’t hurt to have a fairy or ex-fairy on their side. I just wonder how the Blue Fairy would react if Tinker Bell goes to Storybrooke…

Once more, we’re treated to a backstory of how Regina makes wrong choices. Tinker Bell, seeking to save Regina’s soul, tries to provide Regina with the key to happiness, leading Regina to a man she could be content with. Regina decides against approaching the man, choosing the wrong path yet again, though she doesn’t fully realize it until, late in “Quite a Common Fairy,” Tinker Bell points out Regina is selfish by depriving the man of his happy ending, too.

There’s a lot to dissect in this sequence. For one thing, Regina doesn’t often think about others. However, clearly that has changed, as Tink’s last words about being selfish wound her. Regina also has found happiness in raising Henry, even naming her mission in Neverland as Henry would, which is why she is able to throw herself at Tink’s mercy, risking her own heart and life to try to save Henry. She has changed.

It is revealed that the man Tink leads Regina to is none other than Robin Hood (Sean Maguire). Now, Robin already has had love and has a son, Roland (Raphael Alejandro). Maid Marion doesn’t seem to be currently around (maybe I missed that explanation?), but does this mean that, despite the trouble Robin goes through for Marion, they aren’t destined to be one another’s soul mates? Might Regina really belong in this relationship? At least she’d finally have a son to dote on who might appreciate her.

Those who make ONCE UPON A TIME have promised more of Robin Hood in the back half of the season, so I wonder if this is the direction the show will take. Season three seems awfully early to redeem Regina and let her find a happy ending, and yet, after how far she’s come and all she’s been through, it’s hard not to root for her to find her man and child. Maybe this season could be the end of Regina’s story, which would be sad, but it would be a very satisfying exit for her.

Speaking of being with the wrong person, Mulan (Jamie Chung) is ready to confess her love to Princess Aurora (Sarah Bolger), only to stop short when she finds out Aurora is pregnant. So Mulan joins Robin’s band of Merry Men instead.

Unfortunately, this probably won’t be resolved anytime soon. With Neal (Michael Raymond-James) making his way to Neverland, only recurring characters, no main ones, are left in the Enchanted Forest. ONCE UPON A TIME tends to only follow those guest stars when the central cast is around, so we probably won’t see any more development with them this fall.

With all of these new people introduced, there could be room for a few characters to exit the story, and the cast to be expanded again. Fairy tales are all about a finite journey with a happy ending.  What if we’re nearing the conclusion for more than just Regina? Might ONCE consider moving the story in completely different directions with new protagonists? It’s an interesting concept to ponder, though one that seems unlikely to occur.

“Quite a Common Fairy” does an excellent job of really developing more minor players, not serving too many of the main ones very much, but still an enjoyable hour. It isn’t perfect, with Mulan’s plan seeming too neat both before and after it is enacted, and the CGI still a few years away from being truly great on a television budget. But it mostly works, and I’m very interested to see the things that happen in other installments because of occurrences in this episode, of which there should be plenty.