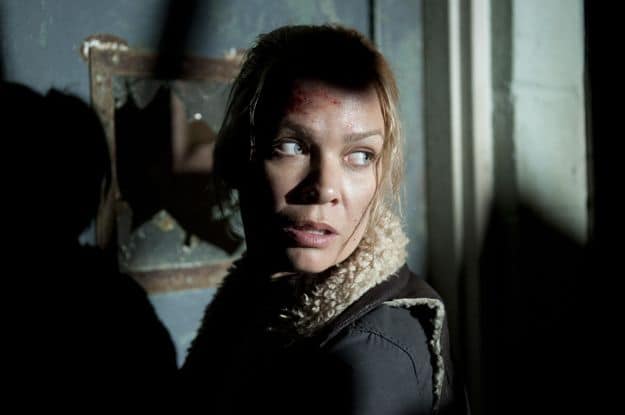 This week’s installment of AMC’s THE WALKING DEAD, “Prey,” is by and large a Woodbury-centric episode, even when it leaves the confines of the town. Andrea (Laurie Holden) is warned by Milton (Dallas Roberts) that the Governor (David Morrissey) plans on killing the prison group, no matter if they do as he has asked or not. And what he has asked for is Michonne (Danai Gurari), so he can torture her. It’s enough to make Andrea sick, and she flees town.

Setting off without a gun, with only a small knife for protection, in a post-apocalyptic world overrun by Walkers is insane. It is a measure of just how terrible a place Woodbury has become, now that Andrea sees the type of man the Governor really is in full light, that she attempts such a thing. Most stable people would not flee relative safety, but when that safety comes at a very high price, one that Andrea cannot live with, she makes her escape.

If anyone can survive with only a knife, it’s Andrea. After all, she only has to make it to the prison, so it’s not like she’ll be out wandering around for weeks. However, the Governor doesn’t make that easy for her, knowing that Andrea will warn her friends about his plans, thus spoiling them, and so he sets out after her.

I do think it’s a little thin that the Governor is able to so easily track Andrea down several times. Seeing her in the field is happenstance; I get that. But why doesn’t he pursue her on foot into the trees? And why doesn’t Andrea pick a different point to leave the trees at, instead of going straight through them, as she must for the Governor to be waiting on the other side? How does the Governor know which building Andrea goes into? Does she have to approach the prison from that exact spot, the one the Governor tracks her to? Why doesn’t she circle around? Why doesn’t Andrea take the Governor’s truck, or sabotage it, after dodging him in the building? Why does the Governor go after her alone, when taking Martinez (Jose Pablo Cantillo) and others will better assure Andrea can be found and stopped?

Some of this can be explained because the Governor and Andrea are both very smart, and they do what makes sense. After the building encounter, one of the creepiest scenes ever for THE WALKING DEAD, she may even be forgiven for thinking that the Governor is dead, and thus not needing to vary her path. But when the hunt is taken altogether, it does play a bit into bad horror movie conventions, where the villain has an uncanny ability to track his intended victim, no matter what happens.

“Prey” is the episode where we see the depth of the Governor’s insanity. He sets up a torture chamber in Woodbury, and stalks Andrea with a single-minded ruthlessness. The fact that he whistles while doing so and scrapes the shovel, alerting Andrea to his presence, is not only silly, because it allows her to avoid him, but cruel, intended to strike fear into her heart (and succeeding). Only a true psychopath, without any empathy for anyone else would act like this. He is a monster, plain and simple.

Andrea is one of the toughest characters on THE WALKING DEAD, and definitely someone who survives. Her play of letting loose the Walkers on the Governor is brilliant, bold, and brave. But I worry about her, now that the Governor has her. THE WALKING DEAD television series verges quite a bit away from its comic book roots, and so no one is safe. While I desperately hope that Andrea survives the season, for once she will not be able to do so alone, as she has become helpless. It’s a strange situation to see her in, but one that really ups the ante.

Andrea’s best shot is with Milton, but his days are numbered, too, and I really expect him not to survive the last two hours of the season. He has gone against the Governor, warning Andrea and quite possibly setting fire to the Governor’s captured Walkers. The fact that he knew the Governor before he was the Governor has given Milton a pass thus far. But as the Governor moves further and further away from being a person, losing his connection to humanity, this won’t save Milton anymore. Just when the doctor grows a spine, he is liable to get it ripped out.

Milton could still let Andrea go before being killed himself, though. Yes, the Governor will be keeping an eye on Milton, as the trust is definitely lost between the two men. However, the Governor can’t watch Milton at all times, so there could be a window of opportunity. If he manages to save Andrea, it will redeem Milton for being complicit in the Governor’s previous activities. First, though, Milton must learn that Andrea is being held captive.

Tyreese (Chad L. Coleman) and his sister, Sasha (Sonequa Martin-Green, The Good Wife), are the unknown factor. They are also beginning to see the true nature of Woodbury, after going out to the Walker pits, and hearing the Governor lie about Andrea. Tyreese plays it cool, acting like he’s on the team, but I feel like at this point he is only doing so to save his skin. I’m not sure if he’ll make a break for it, maybe with Andrea, or if he’s so scared of the outside world that he intends to stay and keep faking it. Tyreese does not trust the Governor, though, so he is not a happy citizen. And he’s a good man who seems like he will stand up for what is right when the chips are down.

THE WALKING DEAD does a fantastic job at character development, and the past three episodes in a row have shown that. When the series focuses on a small number of people per episode, allowing the scenes to dwell on them, lingering on their thoughts and motivations, we get a picture of the person. It’s how, in just a short amount of screen time, we already know Tyreese. This really works for the show, and they should mostly stick to this formula, other than when it’s time for the big action episodes, such as season finales.

The weak spots in the Governor’s hunting bring this episode down a little in my estimation, compared to other entries. But it’s still far better than most other series on television, and I think that “Prey” wonderfully sets up a two hour finale, which will sadly be split over the next two weeks. THE WALKING DEAD airs Sundays at 9 p.m. ET on AMC.