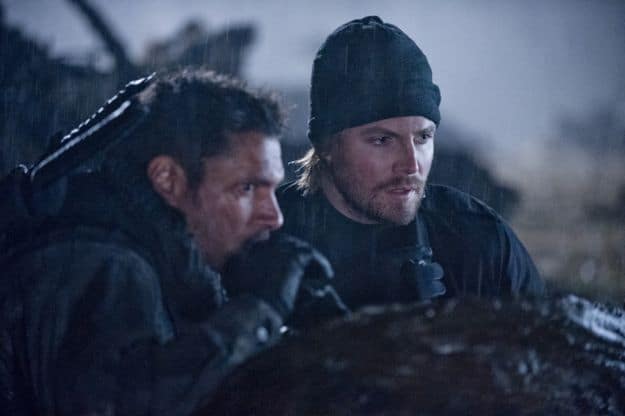 ARROW Season 1 Episode 18 Salvation Photos : OLIVER MUST SAVE ROY HARPER FROM A MURDERER — An angry resident of The Glades who calls himself “The Savior” (guest star Christopher Redman) embarks on a kidnapping and killing spree to punish those he believes have wronged the residents of his neighborhood. To make things worse, he broadcasts these murders online and claims he was inspired by Arrow’s (Stephen Amell) vigilantism. Oliver is horrified by this statement and vows to stop “The Savior,” but his manhunt in intensified after Thea (Willa Holland) comes to him in tears and tells him Roy (guest star Colton Haynes) has been kidnapped. Laurel (Katie Cassidy) is surprised when her father (Paul Blackthorne) starts to believe her mother’s (guest star Alex Kingston) claim that Sara is still alive. Meanwhile, Malcom (John Barrowman) tells Moira (Susanna Thompson) to find the person responsible for his attempted murder. David Ramsey and Colin Donnell also star. Nick Copus directed the episode written by Drew Z. Greenberg & Wendy Mericle (#118).