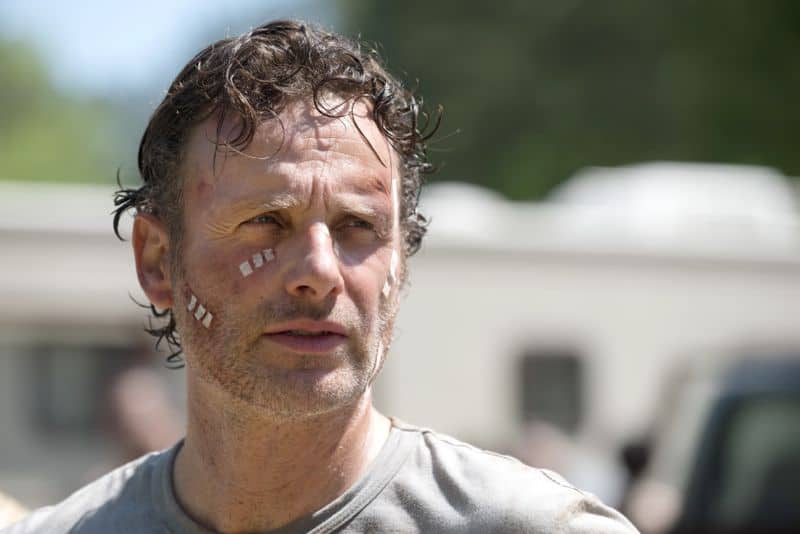 The long wait is finally over, and THE WALKING DEAD has returned to AMC! In last night’s sixth season premiere, “First Time Again,” Rick (Andrew Lincoln) leads the people of Alexandria, including his own group, in corralling a giant herd of walkers. In flashback, the aftermath of last year’s finale is explored interspersed with the current crisis. There are tons of zombies, more than the show has ever shown before, there is death, and of course, things go horribly wrong.

The question of whether or not Rick will be accepted in Alexandria is laid to rest at the end of season five when Deanna (Tovah Feldshuh) lets Rick kill Pete. But just because Rick’s authority is now established, seemingly second only to Deanna’s, and barely so, doesn’t mean the townspeople will go along with it. In fact, if anything, “First Time Again” finds many of them rebelling much more openly than anything we’ve seen so far.

The rabble-rousers are led by Carter (Ethan Embry, Once Upon a Time), but he is just the face that gives voice to others’ concerns. As noted in the first year, Alexandria has not faced what others in the post-apocalyptic world have faced. Without being cognizant of the dangers, they are resistant to Rick’s ideas of violence and putting oneself out there. Carter would prefer to continue to hide behind his walls, not realizing how lucky he’s been and that it’s not sustainable.

“First Time Again” does explain the luck Alexandria has seen so far. A large group of walkers are trapped, and their noise has drawn others in the area to them. The walls of the settlement aren’t being beaten down because there’s a convenient trap keeping the menace off of their lawn. However, the trap is full, and those captured will soon escape. Meaning, Alexandria’s luck is about to run out, unless they listen to Rick, who has a plan to resolve the crisis.

All of this sets up an interesting problem for Rick. He doesn’t want to hurt anyone in order to save the town, but if he lets the people stay soft, they will endanger everyone. Rick tries to make Carter strong by letting him face walkers, but Morgan (Lennie James, now a main character), who has become a pacifist, steps in to protect Carter, ruining the lesson. By the time Carter does screw up, it’s an almost-disaster, with Rick having to silence him before he draws the herd off-course.

Morgan’s position, one in which he protects people, is a valid one, but it’s also dangerous, given what happens with Carter. I do think it’s good to have someone like Morgan around to balance out Rick and remind Rick what they’re fighting to protect, as Rick gets too brutal at times. Yet, as fans of THE WALKING DEAD know, there isn’t always room for compassion in this new, harsh reality, and protecting a group is far removed from protecting only oneself. I don’t think Morgan will make the same mistake again soon, but neither will Rick simply execute anyone anymore, as he avoids doing in the storeroom, as that is going too far.

It will be up to Rick as to which tactics, other than execution, to use, as Deanna doesn’t seem to be making too many decisions these days. Numb after losing her husband, she listens to the lawman more than she ever has, and gives him a large amount of leeway in what he does. This is what Rick wants, and I’m sure he’s capable of handling it, but it does swiftly change the dynamic of Alexandria, and gives rise to Carter and others’ negative feelings.

Thankfully, not everyone is rebelling. Nicholas (Michael Traynor) learns his lesson after Glenn (Steven Yeun) spares him and wants to help out, probably now a loyal friend. Heath (Corey Hawkins, Straight Outta Compton) just returns home and meets our group in “First Time Again,” but having been outside the walls, he immediately sees the wisdom in what Rick stands for. Tobin (Jason Douglas) and Aaron (Ross Marquand) have already gotten on board, and so has Jessie (Alexandra Breckenridge), even if she can’t be close to Rick as he’d like because of her teenage son, Ron (Austin Abrams), who understandably hates the former cop for killing his dad. So it’s not all bad.

Besides showing the herd, THE WALKING DEAD has black and white flashbacks to between seasons five and six, which is stylistic, but also interesting because it gives us chances for that character development that the show does so well. We see how Sasha (Sonequa Martin-Green) is no longer suicidal, Maggie (Lauren Cohan) and Tara (Alanna Masterson) reluctantly accept Glenn’s decision to forgive Nicholas, and how Darly (Norman Reedus) disagrees with some of Rick’s decisions. This is all interesting stuff, and while not super important to the main plot, are the details that make the program so good.

The most intriguing scene to me is when Morgan calls Carol (Melissa McBride) out on who she truly is. I don’t think the Alexandrians have noticed that Carol’s timid housewife is a front, but Morgan does. Carol is kind of Rick’s secret weapon, hiding in plain side and providing intelligence on the ground. If Morgan sees through her, though, others will as well, and I wonder how Carol’s neighbors will feel about her deception.

Then, at the end of the installment, a horn blares and screws up everything. Suddenly, this giant herd of zombies is heading right for the formerly safe little settlement, and there’s no way their laws will hold up to a hoard this big. It promises the intensity the producers seemed to sell for the premiere, but I’m glad they waited to deliver it because it gives us time to get to know the people here more before they have to change forever, as Rick predicted.

“First Time Again” is an excellent mix of a lot of things. There is danger and compelling human drama and foreshadowing and moral complexity. It gives us everything one could want from THE WALKING DEAD except for those who long for big zombie attacks, but I’m sure that they’ll get more than enough of that next week.