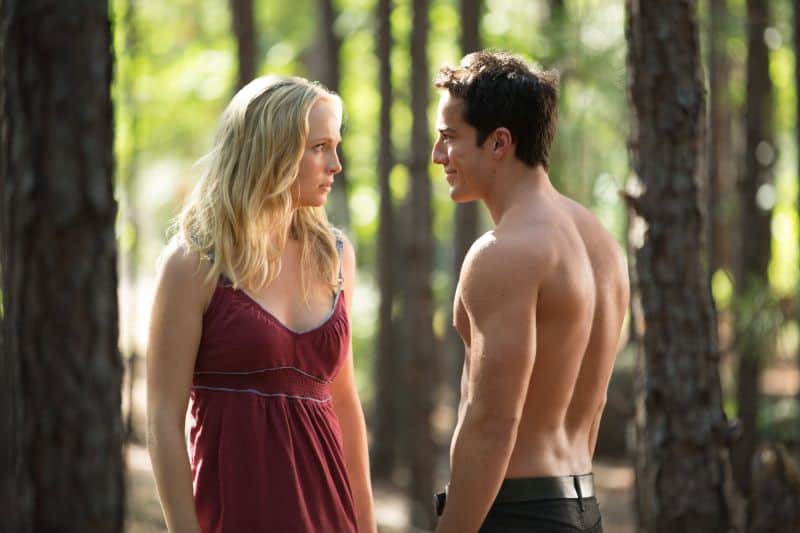 The CW’s THE VAMPIRE DIARIES ended on a huge cliffhanger last spring. The main character, Elena (Nina Dobrev) is killed with vampire blood in her system meaning that she either feeds on someone, turning into a full vampire herself, or dies permanently.

As season four begins with “Growing Pains,” trying to save Elena from this terrible choice is at the forefront of many of her loved ones’ minds. There aren’t any known instances of an almost-vampire avoiding this fate, however, so the only thing anyone can think of is to ask Bonnie (Kat Graham) for help. Unfortunately, it’s not that Bonnie can’t do what they’re asking, but it’s that she shouldn’t, as there will be grave consequences should she succeed.

It’s cool that THE VAMPIRE DIARIES has consequences for the characters’ actions. It’s not exactly a new concept in storytelling, by any means, but for a show about a bunch of teenagers, it’s important to keep that in mind. Even those with supernatural powers are far from invincible, and they must carefully balance what they do with what will happen because of it.

Bonnie has grown quite powerful as a witch, but to keep her from always saving the day, she has to have obstacles to limit her. “Growing Pains” brings her to the brink once more, tempting her sorely to use dark energies that she doesn’t fully understand or control. Needless to say, it’s a bad idea for her to give into this, no matter how good a justification she is able to come up with.

Even better, Grams (Jasmine Guy), a character who had to be killed off, but was done so way too son, returns as the face of Bonnie’s warning. This is a wise woman who knows lots about magic that Bonnie isn’t mature or experienced enough to figure out yet, and as Bonnie does trust her, she is a reasonable representation of good sense, whether she’s really there, or just in Bonnie’s head. Grams also serves another purpose, allowing Bonnie to be punished without hurting any of the major characters.

Of course, Bonnie can’t just be left alone to do her magic, and the other characters aren’t going to sit around for an hour. Enter the new villain, Pastor Young (Michael Reilly Burke, Vegas, Revenge). Pastor Young sweeps into town and, lickety split, fires the Mayor (Susan Walters) and the Sheriff (Marguerite MacIntyre). He tosses Stefan (Paul Wesley), Elena, and Rebekah (Claire Holt) into cells, and sets traps for the others.

Pastor Young is a neat bad guy. He’s got the religion thing, bringing to mind the Priest (Nathan Fillion, Castle, Firefly) from the final season of Buffy the Vampire Slayer. He’s devoted to his mission. He has very loyal followers. He’s intelligent and has resources. His sneak attack on the supernatural residents of the town and everyone connected to them goes off quickly and easily, crippling a number of offenses.

But then he’s wasted, blowing himself and his group up. Is this a sign of just how intelligent he really is, knowing that making himself and his people martyrs, probably framing the vampires for the job, will be a huge influence, with tons of other rising up in his stead? Even so, considering how much he is able to accomplish in such a short time, isn’t it a little early for such a Hail Mary play? Why not keep him around for at least a few episodes? And does this mean that Carol and Liz can return to their jobs now?

Because Young is out of the game by the end of “Growing Pains,” it’s hard to tell just where that plot might go now. Yes, he will probably create a threat for the main characters that exists long after his death. But the nature of that threat is still a mystery.

Dealing with being a vampire will not be easy for Elena. We’ve already seen Caroline (Candice Accola) and Vicki (Kayla Ewell) go through the change with varying results, but Elena is even more central than they are, and THE VAMPIRE DIARIES intends to take its time exploring that. We get to see what she’s feeling, and in Elena fashion, she expresses the moral implications of this change.

However, unlike Caroline and Vicki, things should go pretty smoothly for her because she has something they didn’t have: Stefan. Stefan who is in love with her, and Elena has clearly chosen him. Being back in control of himself again, being free from evil influences, Stefan will do everything that he can to smooth her transition, and this should help immeasurably.

Elena does get a glimpse of how noble Damon (Ian Somerhalder) can be when she recovers a lost memory, but she still chooses Stefan, knowing that he is the one who respects her. Damon has blind devotion, but Stefan lets her make up her mind. That is important to anyone, and Stefan will be a kind mentor and partner who doesn’t force her to do anything that she doesn’t want to do. This represents a clear choice between the brothers, and truly for the first time, there can be little argument that Elena has made the right decision. Even Damon fans will have to see that now.

Finally, Klaus (Joseph Morgan) forces Bonnie to put him back in his body, leaving Tyler (Michael Trevino) alone. This comes too quickly and too easily, barely giving Klaus a partial scene to toy with Caroline, and wrapping up what could have been a long, interesting arc. Sure, this prevents Morgan from going to waste, but it really is regrettable that it plays out so swiftly.

Overall, a terrific start to another season. THE VAMPIRE DIARIES airs Thursdays at 8 p.m. ET on the CW.