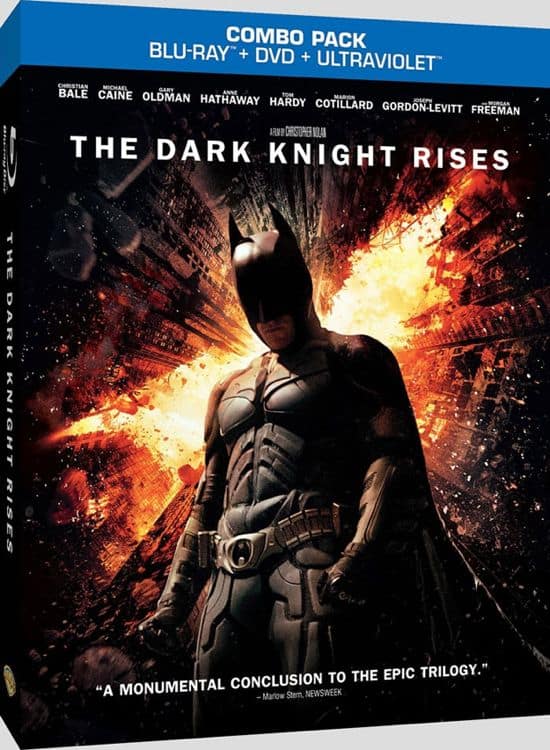 “The Dark Knight Rises” arrives this holiday season onto Blu-ray Combo Pack, DVD and Digital Download on December 4 from Warner Bros. Home Entertainment Group. In the epic conclusion to filmmaker Christopher Nolan’s The Dark Knight trilogy, Gotham City is threatened by the masked terrorist Bane, forcing Batman to return from an eight-year absence and fight for his city one more time.

Also available will be the free “The Dark Knight Rises” app for IOS 5.0 or higher compatible devices including iPhone and iPad, and Samsung Galaxy devices including S2, S3, Note, Nexus and Tab (operating system requirements vary by device). Building upon the already available “TDKR: Gotham City’s Most Wanted” app, “The Dark Knight Rises” app will be updated in two phases. The first update, which will be available in late October, will include several interactive activities such as a photo application that will allow users to put themselves into a Tumbler, a video application that will allow users to insert a Tumbler into their personal videos, and more. The second update, which will be available on December 4, will integrate second screen functionality into the app. It will allow users to sync compatible mobile devices with the Blu-ray disc via BD-Live enabled Blu-ray players connected to the same Local Area Network to access exclusive bonus content. The bonus content will include film location information, Gotham City maps, film trivia, photo galleries and “making of” featurettes. In addition, the second screen app controls playback of the film on your TV via Blu-ray player. “The Dark Knight Rises” app will be available through the iTunes store and Google Play.

“The Dark Knight Rises” will be available on Blu-ray Combo Pack for $35.99 and on single disc DVD for $28.98. The Blu-ray Combo Pack features the film in hi-definition on Blu-ray and in standard definition on DVD. “The Dark Knight Rises” Blu-ray disc takes advantage of the marriage of IMAX® and 35mm formats by using the hybrid master to replicate the unique theatrical experience of integrated film formats. Both the Blu-ray Combo Pack and the single disc DVD include UltraViolet which allows consumers to download and instantly stream the standard definition version of the film to a wide range of devices including computers and compatible tablets, smartphones, game consoles, Internet-connected TVs and Blu-ray players.*

It has been eight years since Batman vanished into the night, turning, in that instant, from hero to fugitive. Assuming the blame for the death of D.A. Harvey Dent, the Dark Knight sacrificed everything for what he and Commissioner Gordon both hoped was the greater good. For a time the lie worked, as criminal activity in Gotham City was crushed under the weight of the anti-crime Dent Act.

But everything will change with the arrival of a cunning cat burglar with a mysterious agenda. Far more dangerous, however, is the emergence of Bane, a masked terrorist whose ruthless plans for Gotham drive Bruce out of his self-imposed exile. But even if he dons the cape and cowl again, Batman may be no match for Bane.

– “THE BATMOBILE” DOCUMENTARY: Witness all five Batmobiles together for the first time in history. Dive deep into every aspect of the most awe-inspiring weapon in Batman’s arsenal as you journey through the birth and evolution of this technological marvel and cultural icon. (01:00)

– ENDING THE KNIGHT: A comprehensive look into how Director Christopher Nolan and his production team made “The Dark Knight Rises” the epic conclusion to the Dark Knight legend.

– Production
The Prologue: High-Altitude Hijacking
Return to the Batcave
Beneath Gotham
The Bat
Batman vs Bane
Armory Accepted
Gameday Destruction
Demolishing a City Street
The Pit
The Chant
The War on Wall Street
Race to the Reactor

– Reflections
Shadows & Light in Large Format
The End of A Legend

– The Journey of Bruce Wayne

On December 4, “The Dark Knight Rises” will be available for download from online digital retailers including iTunes, Xbox, PlayStation, Amazon, Vudu and CinemaNow.

*UltraViolet allows you to collect, watch and share movies and TV shows in a whole new way. Available with the purchase of specially marked Blu-ray discs, DVDs and Digital Downloads, UltraViolet lets you create a digital collection of movies and TV shows. Services such as Flixster and VUDU allow you to instantly stream and download UltraViolet content across a wide range of devices including computers and compatible tablets, smartphones, game consoles, Internet-connected TVs and Blu-ray players. Restrictions and limitations apply. Go to ultraviolet.flixster.com/info for details. For more information on compatible devices go to wb.com/ultravioletdevices.

Rating: PG-13 for intense sequences of violence and action, some sensuality and language