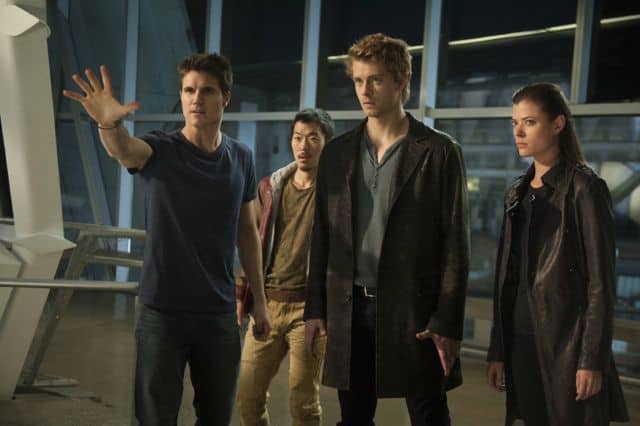 The CW doubles down on the Amell family this fall by launching THE TOMORROW PEOPLE, starring Robbie Amell (1600 Penn), airing on the same night as Arrow, which is fronted by Robbie’s cousin Stephen. To make things more confusing, Robbie’s character is named Stephen. Both shows are action-packed and dabble in abilities not normally attributed to human beings, but both are grounded in the real world, as well.

THE TOMORROW PEOPLE introduces us to the next stage of mankind’s evolution in the “Pilot.” Genetic mutations are creating a new form of the species with three abilities: telekinesis, telepathy, and teleportation. Stephen Jameson is one such person, though he doesn’t understand that as the show begins, accidentally teleporting in his sleep to end up in bed with the neighbors, even when he straps himself down. This is causing no end to the stress and frustration of his mother, Marla (Sarah Clarke, Covert Affairs, 24), and Stephen’s own bad attitude about his situation has driven away all of his friends, save Astrid (Madeleine Mantock, Casualty).

Is Stephen’s tale a metaphor for adolescence, hit a little too squarely on the nose? Well, yes, but then again, so are a myriad of other shows and books involving super humans and supernatural types. THE TOMORROW PEOPLE is a superhero tale, though one more firmly rooted in science than most, and set during the present day as homo sapiens boldly move into the future and the next stage of life as we know it. And while Stephen is a familiar “savior” type, I still find him interesting.

It may be a stretch to define THE TOMORROW PEOPLE as realistic. After all, for decades much the same developments have been predicted by the more fanciful dreamers among us. But there’s just enough authenticity and earnestness present to make for a convincing plot, dare I say a step higher in ambition than the fare the CW is mostly known for? I’m not saying THE TOMORROW PEOPLE quite hits that upper level, but at least it’s trying.

Stephen isn’t left to fend for himself in the “Pilot,” soon introduced to two distinct groups, each offering a choice. The first is made up of other teenagers, instantly recognizable to viewers as the “good guys.” The faces THE TOMORROW PEOPLE focuses on in this gang are Cara (Peyton List, Mad Men), Josh, (Luke Mitchell, Home and Away), and Russell (Aaron Yoo, 21). They have a secret base in the subway tunnels, complete with other fellows, whom are just extras thus far, and a super-computer named Tim. They want Stephen to live with them.

What’s interesting to me is how underdeveloped these characters are, and that’s the “Pilot”’s biggest weakness. Yes, the trio who are main characters have their own personalities, but they don’t have a clearly defined mission, other than just to try to find others like themselves. They need Stephen because of who his father is, but don’t have a cohesive plan on how to recruit him and get him to help them. They just expect Stephen to go along with whatever they say. And they seem to have no lives or relations outside of this group.

Stephen has a second option in Dr. Jedikiah Price (Mark Pellegrino, Being Human), the man at the head of Ultra. Ultra wants to protect mankind by neutralizing the powers of THE TOMORROW PEOPLE, and uses some of those abilities for its own purpose. It’s shady, both in description and action, and so we immediately know these are the villains.

Stephen doesn’t immediately recognize that, though, even when Jedikiah’s claims seem suspect. Considering himself a member of the human race, although many on both sides insist that he’s not, Stephen is sympathetic to Jedikiah’s mission statement, even after he is mistreated by Ultra.

Now, there is a perfectly reasonable explanation as to why Stephen would work for the bad guys, secretly staying friends with John, Cara, and Russell: Jedikiah can hurt Stephen’s family and friend. With something to lose, Stephen is vulnerable to manipulation. The “Pilot” makes it seem like Stephen realizes this, and may decide to cooperate with Jerikiah as a ruse, to protect those he cares about. Yet, the story is murky on this, making it feel like Stephen betrays those we want him to work with, even as the show doesn’t quite lay all this out.

It’s this lack of definition that seems the most obvious failure of THE TOMORROW PEOPLE. A few extra scenes, some more dialogue, and the vulnerabilities in the “Pilot” can be patched up. Which is why I think this will probably be a pretty good show, even if the first episode is only good, not great. That, and Jedikiah is a little too evil for my taste, leaving me wishing the complexity he exudes could be taken further, but there is wiggle room to grow.

THE TOMORROW PEOPLE premieres Wednesday at 9 p.m. ET on the CW.