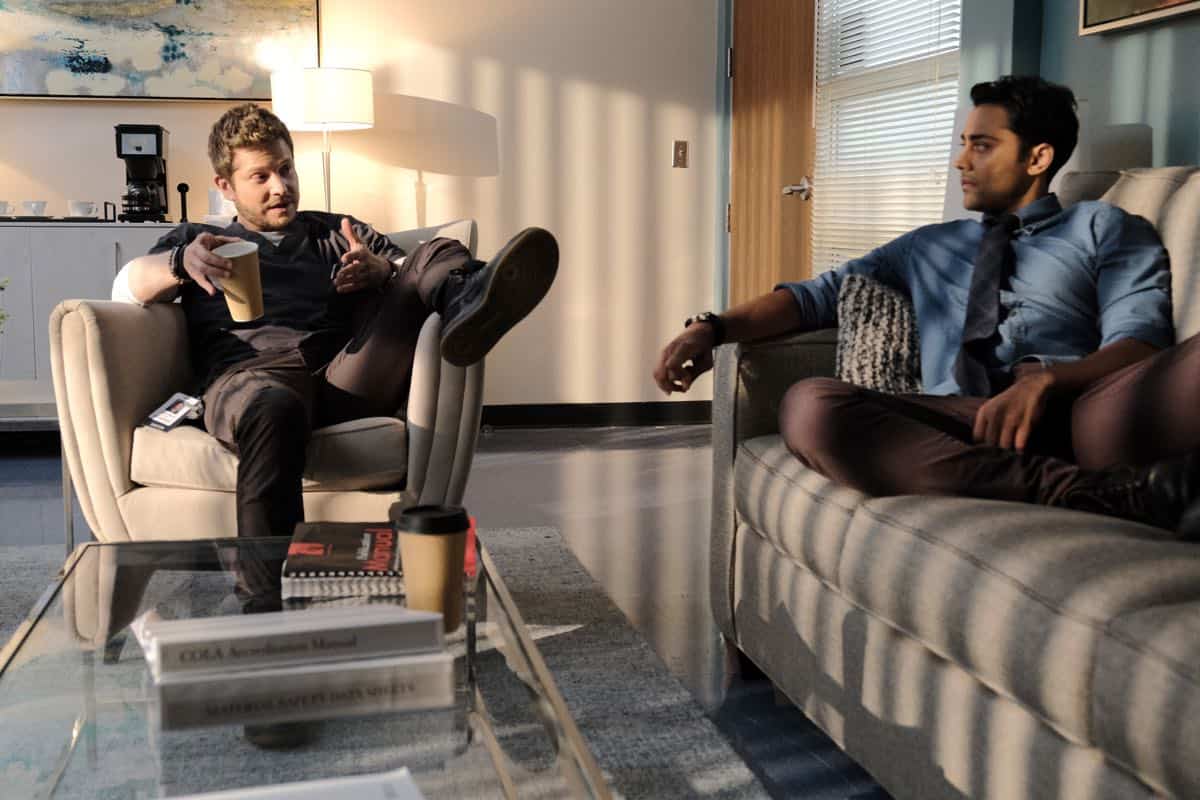 THE RESIDENT Season 3 Episode 2 Photos Flesh Of My Flesh – Cain tries to recruit Bell and Kit to join him on a dangerous surgery, with the intent of garnering publicity for the hospital. Meanwhile, the Raptor finds himself with an emotional attachment to a patient whose life is put in his hands and Mina’s friend, Adaku (guest star Erinn Westbrook), arrives at the hospital with shocking news. Also, Devon rotates out of the ER and Nic plans a surprise for Conrad in the all-new “Flesh of My Flesh” episode of THE RESIDENT airing Tuesday, Oct. 1 (8:00-9:00 PM ET/PT) on FOX. (RES-302) (TV-14 L, V)

Entering its third season, THE RESIDENT continues to rip back the curtain and reveal the truth of what really happens, both good and bad, in hospitals across the country. The provocative medical drama follows a group of doctors at Chastain Memorial Hospital, as they face personal and professional challenges on a daily basis while fighting for their patients.

In Season Three, Red Rock Mountain Medical has taken over, inserting its own doctors – including new neurosurgeon DR. BARRETT CAIN (Morris Chestnut, “Rosewood”) – and nurses into the well-oiled machine that was once Chastain Memorial Hospital, and causing the doctors to fight harder than ever against the corrupting influence of money in healthcare. The hospital is being run like a profit-hungry corporation – reaping huge financial gains, while risking the lives of its patients.

DR. RANDOLPH BELL (Bruce Greenwood) is well-aware of the dangerous deal he has made with Red Rock, in order to get Chastain out of its financial crisis and, as a result, initially turns a blind eye to the new corporate mantra of profits over patients. It’s not long before DR. CONRAD HAWKINS (Matt Czuchry), incurs Red Rock’s fury when he confronts the problems head-on, becoming a whistleblower. The good fight he leads could ultimately threaten everything he holds dear, including his ability to practice medicine.

The Justice League of young healthcare providers must unite to fight for and with him, with NICOLETTE “NIC” NEVINS (Emily VanCamp) in the lead. Nic attempts to recover from a devastating personal loss by throwing herself into patient care and her work for the uninsured through her clinic. DR. DEVON PRAVESH (Manish Dayal) will find himself rotating out of the ER and gaining experience and power of his own in new positions within the hospital, eventually moving up to a first year resident. DR. AJ AUSTIN (Emmy Award nominee Malcolm-Jamal Warner) will continue to bond with his mentee, the exceptionally talented surgeon, DR. MINA OKAFOR (Shaunette Renée Wilson). She’ll be his support as he navigates a relationship with his complicated biological family, while striving to maintain one with the parents who raised him. Okafor will be faced with a potential new family dynamic of her own, when her best friend, Adaku, who carries the BRCA breast cancer gene, returns pregnant with no father in the picture.

Meanwhile, the power and ruthlessness of new neurosurgeon Dr. Cain takes the hospital by storm. He embodies all the evil that can result when doctors care more for the bottom line than for their patients. DR. KITT VOSS (Emmy Award and Golden Globe nominee Jane Leeves) is the first to realize that his charm hides a medical demon, but standing against him could have serious consequences for her future. Cain’s ability to generate millions for Chastain leaves him free to exact swift revenge on those who oppose him – and no one is off limits.