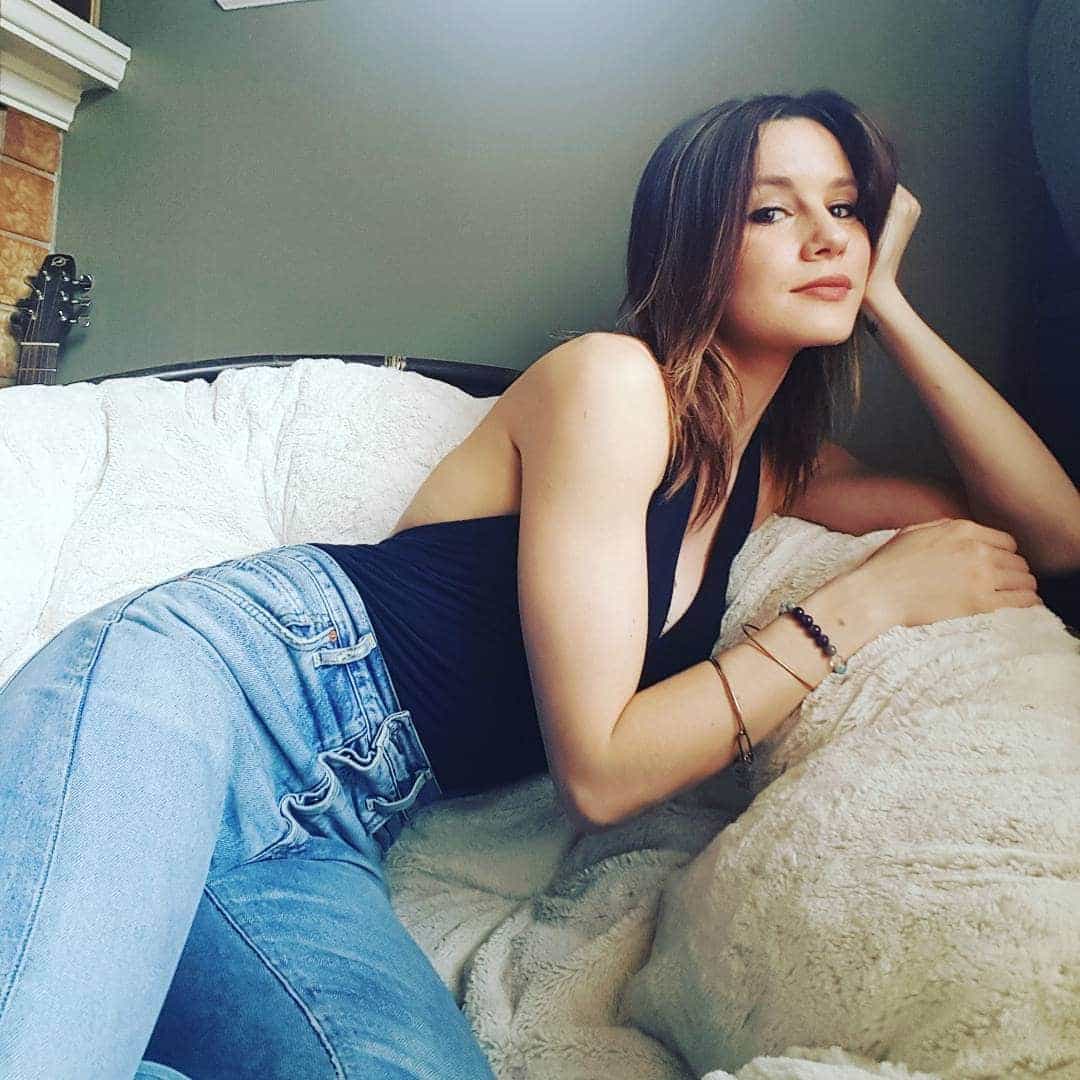 Building a solid acting career with a wide range of roles, Chelsea Hobbs returns this year with back-to-back riveting portrays in Lifetime’s new film THE PSYCHO SHE MET ONLINE and portrays a new character introduced in Season 3 of Lifetime’s award winning drama UNREAL. Having captured attention and the hearts of fans with her nuanced performance in the ABC Family drama series MAKE IT OR BREAK IT, Chelsea is as dazzling as ever. In an exclusive interview, Chelsea shares the appeal of her two new roles and the joy with which she embraces her entire career.

What initially appealed to you about the role of Karen Hexley and working on the THE PSYCHO SHE MET ONLINE?
CHELSEA:  When Lifetime sent me the script I thought it was a super fun and current storyline. The network has been so amazing to me over the years, and I always welcome an opportunity to create fun stories with them. I also was renting out an apartment I own to strangers via AirBnb, so it was pretty funny timing.

How would you describe who Karen is?
CHELSEA:  Karen is a dedicated wife, brave paramedic and pretty easygoing. Stepping outside of her comfort zone is a bit of a challenge for her, but when she has to make things work she’s willing to do what it takes.

What do you most admire and/or like about Karen?
CHELSEA:  I’d say everything I said above. (Ha, ha.)

What is it like working with such a strong ensemble cast?
CHELSEA:  Great! Charity Shea was a very focused and hardworking actress and Matt Lawrence as well.  In a short period of time, we become very close and had a lot of fun together on this.

What has been your favorite part about working on this project?
CHELSEA:  Aside from the film itself, we had a day going to Nordik spa in Quebec. There is a fight scene that left us all really sore so we decided to take full advantage and have a spa day. (Ha, ha.)   As for the filming experience, the ability to play a paramedic was a different challenge for me that I really enjoyed. It’s always great to learn new things and this job allows me to do that often.

What do you hope viewers continue to take away from watching THE PSYCHO SHE MET ONLINE?
CHELSEA:  I think with this movie, it’s all about them getting a kick out of it and enjoying the ride. It’s fun and suspenseful and we were fortunate to have a great team, so I hope everyone has as much fun watching as we did making it.

You also appear as Charlie in the new season of Lifetime’s UNREAL.  How would you describe who Charlie is and the appeal of that character?
CHELSEA:  Yes. Charlie is a new camera assistant on the series’ fictional show Everlasting. I am really having a blast playing someone who is seeing this world through new eyes and who is super eager to learn. I would say that on UNREAL, everyone has become a bit immune to the happenings and the creation, Charlie is fascinated by it all and brings a new light to the work.

Had you been aware of or watched the prior two seasons of UNREAL when you got the role? If so, what did you love about the show?
CHELSEA:  I absolutely loved the show. It was so amazing to see a critically acclaimed show on Lifetime run by strong women, as well as depicting strong and well written women. I feel very grateful to be a part of something special, and everyday I’m truly excited to go to work and see the brilliant actors and filmmakers do their thing. Plus, who doesn’t like to see the way these reality shows are really made?!

Now that you have worked on UNREAL, what do you love the most about the show?
CHELSEA:  Ah, I did it again. Everything I said above. It’s really special when you go to work and not only have truly talented people all working together, but ones who love being there and care about the show. We laugh, and there are scenes that make us want to cry. The writing is smart and funny and every cast member adds something wonderful.

How would you describe Charlie’s interactions with Quinn (Constance Zimmer) and Rachel (Shiri Appleby)?
CHELSEA:  Yikes, without giving anything away that’s hard. Gotta watch!

What has impressed you the most about working with Shiri Appleby and Constance Zimmer?
CHELSEA:  Shiri and Constance are both directing this season, and it’s pretty amazing to see them jump from in front of the camera to behind it within moments. They are pretty inspiring, and it’s just really cool to see them bring these characters to life.

Who cracks you up the most while filming scenes on UNREAL?
CHELSEA:  Josh Kelly and Craig Bierko. Independently, and together.

What have you learned from working on UNREAL?
CHELSEA:  Ah, that’s tough. How hard it is to wear a radio and camera gear all day? (Ha,ha)

What do you hope viewers take away from watching Season 3 of UNREAL?
CHELSEA:  I just hope they love it. TV is for pleasure after all  and I hope they love the show as much as we do.

What has surprised you most about your career so far?
CHELSEA:  How lucky I’ve been, and how the harder that I work, the more I love what I do.

At this stage of your career, what do you think you have learned from the amazing variety of roles and projects you have worked on?
CHELSEA:  I think I’ve learned to just appreciate every job for what it brings and to be openminded and humble. Each project comes and then goes, we make friends and then we move on to the next journey. I try to enjoy the process and love what I do.

Then what are the perks of where you are in your career right now?
CHELSEA:  I think just being able to pay my bills and be an actor is kinda cool. I’m super grateful to be doing something I love.

If there were one role you would like to revisit, which would it be and why?
CHELSEA: Oh, I would say Gerda in “Snow Queen” because of the “unreal” (see what I did there?) experience and story. OR Emily Kmetko to work with my MIOBI [MAKE IT OR BREAK IT] family again — if it WEREN’T for the leotards 😉

You seem to take on roles that are very challenging. Do any of your characters and the situations they find themselves in ever leave a lasting impression on you?
CHELSEA:  Absolutely. Every role leaves something. Some have felt too real and been almost unsettling and taken time to move past, but I try to leave the work at work for the most part.

Has there been any great advice you have gotten?  What advice would you offer to other upcoming and aspiring actors?
CHELSEA:  I was told at a young age in this industry to be kind to everyone. I understood early on that we are all starting at the bottom and working our way up. We are all kinda equals in this, and as quickly as we have success, we can lose it. So I think a combo of just don’t be a crappy person and remember where you started, has really stuck with me.

Do you have any other upcoming projects that you can share that fans should keep an eye out for?
CHELSEA:   now, I’m deep into filming UNREAL, so that’s my life at the time being and we will see what is to come after we wrap!

At a time when women’s voices are rising to be heard and respected around the country and world, what do you recommend your fans do to lend support in that endeavor?
CHELSEA:  I think as women, we have to continue to push do what moves us each independently and what we feel passionate about. Do the marches, sign the petitions, VOTE, teach your children well and lead by example. Fight for the raise at work or for the job at all, exercise your rights in your government, educate yourselves, and step into your power. We have to come together in every way we can to collectively speak out.

To see how and if Chelsea’s character Karen survives the ordeal of a stranger moving into her home, be sure to tune into the premiere of THE PSYCHO SHE MET ONLINE on Sunday, April 9th at 9:00 p.m. on Lifetime. Then also be sure to tune in for the Season 3 premiere of UNREAL, when the show returns in June, to find out if Chelsea’s character Charlie can survive the latest blood-thirsty season of “Everlasting.”