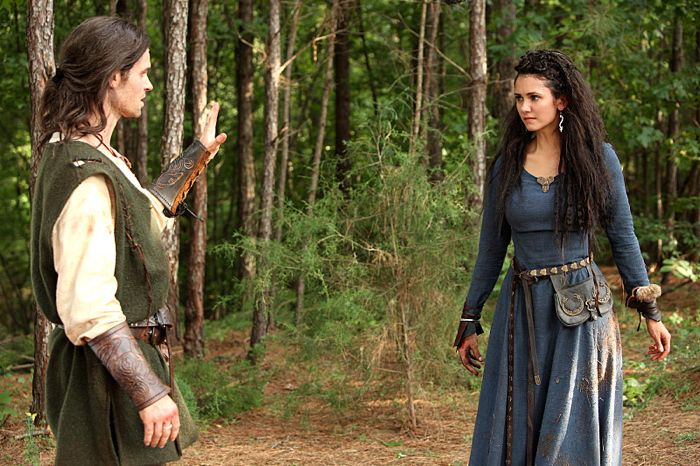 It is a tale as old as time, a star-crossed love of a vampire and a doppelgänger.  But this time, it is the tale of Tatia (Nina Dobrev) and Elijah (Daniel Gillies).  Tatia was Elijah’s first love and his lost love.  As a doppelgänger, Tatia was not destined to love Elijah, but with her first husband dead, she felt free to love again.  So in this special episode, we meet Tatia and discover a tale that has been hidden in time.

So what else will the “Red Door” episode reveal?  Here’s ten teases to get you excited about this jam-packed and torture-filled episode:

Deconstructing Elijah
Caught in his mother and Finn’s aka Vincent (Yusuf Gatewood) wicked trap in last week’s episode, Elijah finds himself in a precarious predicament.  His mother does not want to kill him, she wants to save him — from himself.  So mommy-dearest is going to use her powerful magic to stir up the past and make Elijah remember everything he would rather forget.  After all, Elijah and Klaus (Joseph Morgan) have lived a thousand years and not all those years were blood-free and free of death, destruction and general mayhem.  They are, after all, vampires.  Anxious to flee his past, memories rather forgotten and those blasted witch-magic infused chains this mother has trapped him in, Elijah will do his best to maintain his sanity in the face of his mother’s mental manipulations.

Butterfly Wings
Esther Mikaelson aka Lenore (Sonja Sohn) has a unique love for her children.  Unlike their father, who would be consent to simply white-oak stake the whole lot of them, Esther has a more crafted approach to tormenting and perhaps ultimately redeeming her children — and for Elijah, it involves reminding him of his fascination with all things with “butterfly wings.”  Ever wonder why Elijah insists on being the vampire in a suit?  Well, maybe Elijah has his mother to thank for that too.  By the end of this episode, you will fully understand why all the Mikaelson children have fled both their parents — the physical and mental anguish was too much to bear.

Long Live Kol Michaelson
Surely someone is going to figure out that Kaleb aka Kol (Daniel Sharman) is way too interested in the Mikaelson family to stay beneath the radar for long.  But ’til then, it sure is a lot of fun watching Kaleb romance Davina (Danielle Campbell).  As fans surely know, Kol’s allegiance to anyone is as fickle as to which day it is and whose interests align with his own.  For now, Esther and Finn may have resurrected him, but who is to say that Kol will not get a better offer?  So who is going to be the highest bidder for Kol’s allegiance, that answer is going to surprise everyone.

Wrath of the Father
Run, run, run as fast as you can — for papa Mikaelson is a terror that the world has never seen before.  The world may fear Klaus (and rightfully so), but the only person Klaus fears is his father.  Why? Because Mikael (Sebastian Roche) is relentless in his sole desire to kill each and every one of his children.  It is his all-consuming passion and he will stop at nothing.  Good thing that Davina has him under her spell with her magic-infused bracelet then.  But what would happen if Mikael got loose again?  The world would literally shudder around them — as it should.  Fortunately, Klaus is not the kind of person to run from his own fears.  He is the type to hunt down his father and face him on his own terms, rather than hide in fear.  So if you think there is a showdown between Klaus and Mikael looming, you would be right.  This is the episode to see that fight and just who is on the losing end of it.

Enabler of the Weak
Cami (Leah Pipes) has been called worse things in her short life, but when labeled as the “enabler of the weak,” it seems like a unfair epithet that she does not deserve.  Cami has always trusted her heart and helped those she called her friends.  Human or not, she possesses the strength and courage rarely seen in a mortal human.  Perhaps it is due to being “tried by fire” and thrust amongst the werewolves, vampires and witches and still finding herself miraculously alive has imbued Cami with the confidence that she can walk amongst them and still live another day.   But one day that confidence may cost her more than she anticipated.  She will cross paths with someone who does see her value or that she has been blessed by destiny itself.  When that day arrives, everyone should be praying for the girl who trusted in the goodness of man more than she should have.

Eternal Curses
The Mikaelson family began the vampire curse, but the werewolf curse passed by blood to Klaus was around before him.  So the werewolf curse cannot be held against them.  But all the roads of vampirism lead straight back to Esther and that failed attempt to help her children and how it resulted in a curse that she never intended.  Is that why she is back now?  Is it not to just simply kill her children, like she tried before, but this time to find a way to eradicate vampirism from the entire planet?  And if that is not it, then just what crazy plan does Esther have now?  And will she be pleased or dismayed to find out that her husband Mikael has risen from his dark grave as well?

Hybrid Unhinged
Dear lord, what has happened to Hayley (Phoebe Tonkin)?  Once the human heart and reminder that there is goodness in humanity, Hayley seems to have shed that emotional skin and now walks across the Earth as if it were beneath her notice.  Only that which serves her notion of family seems to awaken her interest, and Hayley aligns with Klaus as the father of her child and their mutual interest in protecting Hope.  But everyday it seems a bit of her humanity falls away.  Even Elijah has noticed her pulling farther and farther away.  So what will awaken her again from her supernatural slumber as a hybrid?  Will the fact that Elijah is missing stir some feeling of passion inside her?  Will she be his champion this time?

Feasting on Flies
One of the lines that will echo from this episode is: “In the time of need, even the devil eats flies.”  Imagine how low a person must be to consider such a thing.  How desperate and angry and frustrated — and perhaps more than jus a little dangerous — such a person would be?  So who is going to be the recipient of this dire warning?  Listen and quake when you hear it.

The Red Door
Watch for a literal red door in this episode.  It will be seen early in the episode and the significance of it will not be revealed until the end.  Doors are meant to be a way of gaining access to a protected area, or to shut out something unwelcome.  Both will come into play and it just make break your heart once you find out what that red door really means.

Notable Quotes
See if you can guess which character will be saying these foreshadowing quotes –
QUOTE:  “What have I become?”
QUOTE:  “You were already broken.”
QUOTE:  “He hurt you and for that alone I’d kill him.”
QUOTE:  “I crave you — my hunger could overwhelm me.”

To find out who does or does not survive the night in this episode, be sure to tune in for an all new episode of THE ORIGINALS on Monday, November 3 at 8:00 p.m. on the CW.