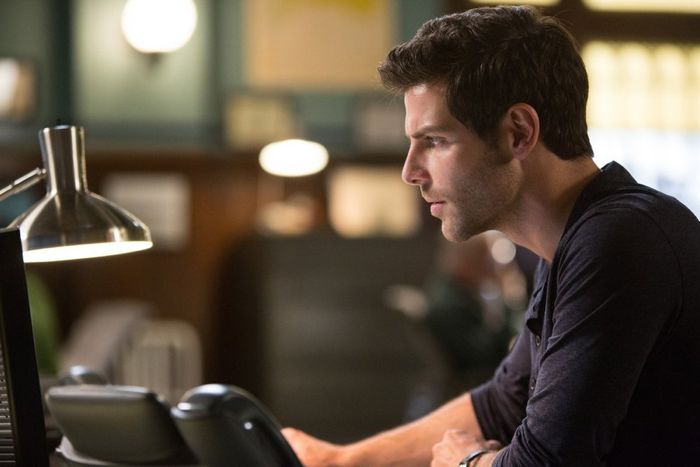 Tonight’s GRIMM on NBC is called “Octopus Head” because of the type of Wesen causing trouble in town. Trubel (Jacqueline Toboni) continues to hunt the creature, past the boundaries Nick (David Giuntoli) sets for her, which of course leads her into trouble (yes, I know what I just did there and I am appropriately ashamed). But the killer isn’t the only problem in town as Nick remains without his Grimm powers, which not everyone thinks he should try to get back, and Captain Renard (Sasha Roiz) is dead.

Thankfully, Renard stays dead only a very brief time before his unseen-until-now Hexenbeast mother revives him. Sure, there is something to be said for killing off main characters, and it is an effective tool that GRIMM has yet to use. But the way in which Renard dies isn’t high on dramatic impact, so it’s better that he survives now to die another day.

Besides, Renard is our connection to the European royalty, namely, Viktor Albert Wilhelm George Beckendorf (Alexis Denisof), whom Adalind (Claire Coffee) returns to in “Octopus Head.” Adalind took Nick’s powers in the hopes that Viktor would give her baby back, but since Viktor doesn’t have the infant, that presents a problem. This means Adalind winds up in a dungeon instead of reunited with her child, something that seems totally in-character for Viktor to do to her. I’m sure he’ll let her out again as soon as he has another use for her, but poor Adalind is merely a piece in someone else’s game these days.

Unlike Adalind, Trubel resists any attempt to be a pawn at every turn, refusing to go along with what anyone tells her to do. This streak is noticeable in her before, and on a show like GRIMM, that means it’s only a matter of time before she gets hurt. That happens twice in “Octopus Head,” once when confronting the Wesen she’s hunting, who gets the drop on her, and again when she is kidnapped by Agent Chavez (Elizabeth Rodriguez).

Viewers are not clued into what Chavez’s plans are yet, but since she doesn’t immediately kill Trubel, the girl is probably safe enough for now. When Trubel does eventually get out of the situation, though, will she have learned her lesson? Or will she be as fool-hardy and independent as ever? I get her life up to this point has prepared her for the latter and a quick taming isn’t in the cards. But I also see the way she relates to Nick and Juliette (Bitsie Tulloch), craving their approval, so I hope she calms down before something really bad happens to her, which, since she’s not a main character, could be her fate.

With Trubel out of action, Nick needs to be a Grimm again more than ever, but it’s no simple task to restore his powers. Monroe (Silas Weir Mitchell) and Rosalee (Bree Turner) are skipping their honeymoon to try to find a cure, but Juliette asks them to hold off, thinking her life might be simpler if her boyfriend was not a hunter of the supernatural. She’s right, I’m sure, but that doesn’t mean she’s making the right decision.

I don’t think anyone believes Nick will stay Grimm-less for long, no matter what Juliette says; the fact that Monroe and Rosalee ignore her request to halt their work supports that. However, I’m more interested in what it will do to Juliette and Nick’s relationship if she doesn’t come around. Things are already rocky between them after Adalind tricks Nick into sleeping with her. Nick ignoring Juliette’s wishes could further jeopardize the union.

Something else in jeopardy is Wu’s (Reggie Lee) place in the dynamic. He knows Nick and Hank (Russell Hornsby) have been lying to him. He has put the pieces together about Trubel, if not the Wesen. He’s clearly getting into the loop one way or the other in the very near future. The question is, will Hank and/or Nick ease him in, or will he force his way in, causing conflict among the main cast? The latter option is more interesting, of course, and seems to be the way GRIMM is heading, but eventually, we’ll want to get to the former so the detectives better quit burning bridges with the under-used officer, who, as a fan of Lee, I’m excited to see take on a larger role.

“Octopus Head” is an episode that moves the larger arcs forward, but doesn’t stand on its own. This is the type of installment I prefer, advancing the story without worrying about a procedural format. GRIMM often does this well, though not always on a weekly basis.