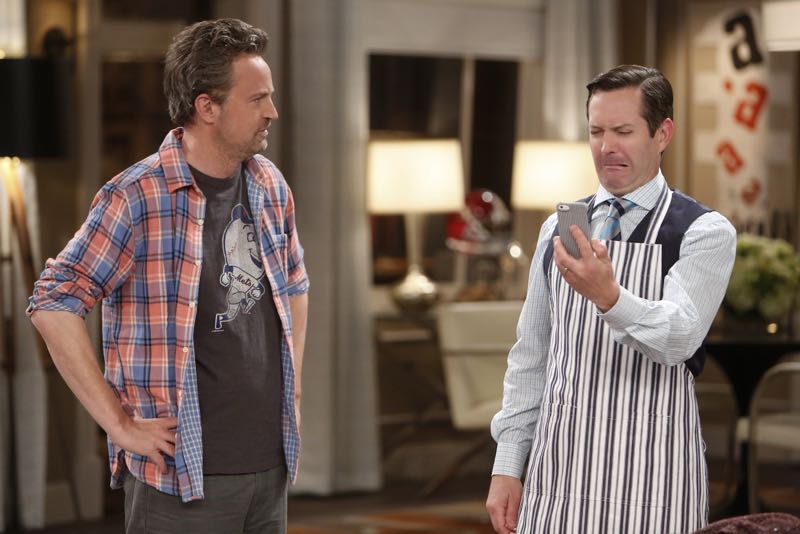 Many have said that CBS’s new remake of THE ODD COUPLE, premiering this week, is unnecessary. Those people are absolutely correct. THE ODD COUPLE is a classic play, a classic movie, a classic television show, and is still performed on stages across the country (I, myself, was Felix in high school), so why does it need yet another on-screen version? Well, the key here would be were the series to be updated to reflect modern sensibilities. But it hasn’t been long enough since it was written to need even that.

CBS’s THE ODD COUPLE stars Matthew Perry (Friends, Go On) as Oscar Madison, a sloppy sportscaster who isn’t dealing with the emotional heft of his divorce. When Oscar’s friend, neat freak Felix (Thomas Lennon, Reno 911!, Night at the Museum), is similarly dumped, Felix comes to stay with Oscar. They quickly get on each other’s nerves.

Now, this will sound familiar because the basic story has not been changed in any way. Some of the lines of dialogue in the pilot come straight out of the original source, and the leading characters are essentially the exact same as their earlier counterparts. There is nothing distinguishing about this version, except perhaps that Felix makes vegetarian cuisine.

Everything else about this ODD COUPLE is sanitized and dated. Oscar’s mess is purely surface-level, a clearly staged disaster that is easily cleaned. The dialogue is hokey for 2015, and the story is not edgy enough. This feels like a sitcom from another era, which it is.

The first major mistake The Odd Couple makes is condensing the entire plot of the play into twenty minutes. From the poker night spoiled, to the awkward double date, the pilot of this show rockets right on through everything fans of the play or movie remember, condensed incredibly. This is really bad because the emotional arc between Oscar and Felix is similarly compacted, meaning Felix gets on Oscar’s nerves before he really has time to, and they come to an understanding way too early. I wasn’t a viewer of the old series, which aired long before my time, so I don’t know if they made the same error, but it feels very strange here, as if they should have taken a minimum of two half-hours, or preferably more, to cover this.

Interestingly, it’s actually emotional depth that makes THE ODD COUPLE work, though. Yes, the initial arc is too quick, but I like that Felix is determined to make Oscar face his feelings and Oscar realizes he needs that help. Felix also understands he needs Oscar to help him loosen up. Now that the pilot is out of the way, I’m interested to see where they build their relationship over time, and if they can make it evolve, rather than staying stagnant.

The supporting cast may help with that. Oscar’s assistant, Dani (Yvette Nicole Brown, Community), is only in the early bit of the first episode, so we don’t know what her reaction will be to Felix’s interference, but by her disgusted looks, she should approve. Oscar’s friend, Teddy (Wendell Pierce, Treme), must have his loyalties divided, not enjoying having the poker night ruined, but certainly glad for the assistance in getting Oscar back on track. Felix’s love interest, Emily (Lindsay Sloane, Horrible Bosses), is very much like Felix, so could hinder his growth. Guest star Casey (Leslie Bibb, About a Boy) could do the same for Oscar.

But in order for this to work, a lot must be overcome. Lennon and Perry are hilarious, to be sure, but THE ODD COUPLE makes me wish they’d created original characters instead of trying to use Felix and Oscar, as I’d be curious to see what they could do together without being boxed in by history. As it is, their considerable talents seem wasted, at least for now.

THE ODD COUPLE premieres Thursday at 8:30 p.m. ET on CBS.