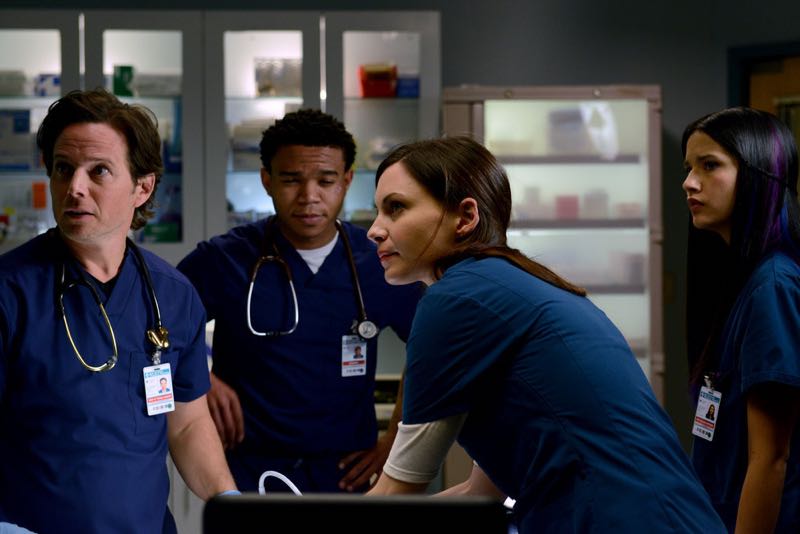 ‘THE NIGHT SHIFT’ IS BACK FOR SEASON THREE AND THE OVERNIGHT CREW AT SAN ANTONIO MEMORIAL BECOMES IMMERSED IN A BIZARRE CAR ACCIDENT RESCUE – In the first half of this two-part episode, the night shift crew is back for more action and the gang finds themselves immersed in a life-and-death rescue of a woman gravely injured in a car accident. While TC Callahan (Eoin Macken), Scott Clemmens (Scott Wolf) and Topher Zia (Ken Leung) deal with the situation at the hospital, Drew Alister (Brendan Fehr) is serving time overseas in Afghanistan and he, along with colleague Syd Jennings (recurring guest star Jennifer Beals, “Proof”), have to figure out a way around the cultural divide to treat a young Afghani woman. Jordan Alexander (Jill Flint) has recruited Shannon Rivera (Tanaya Beatty, “Lewis and Clark”) to the night shift team and the recent med school graduate is eager to prove herself, but her spunky, outspoken nature may not sit well with everyone, particularly Paul Cummings (Robert Bailey Jr.). TC’s sister-in-law, Annie (Sarah Jane Morris), returns and JR Lemon also stars as Nurse Kenny Fournette.