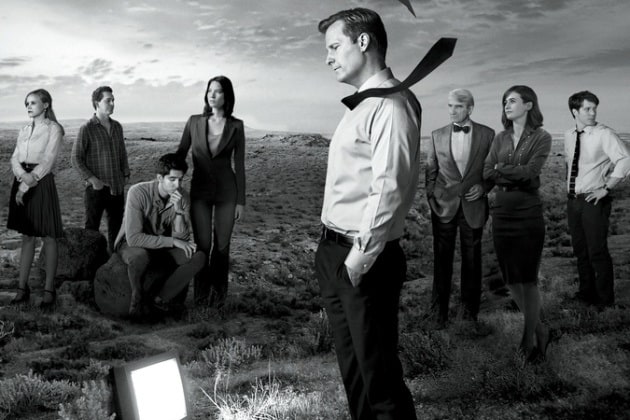 HBO’s THE NEWSROOM is back for a second season with “First Thing We Do, Let’s Kill All the Lawyers.” The main part of the story takes place two weeks after the events of last year’s finale, and the various characters must deal with the consequences of their actions, both professional and personal. If you have not yet watched the episode, I recommend viewing it before reading this review, to avoid anything being spoiled, as the various story points will be discussed below.

Will McAvoy (Jeff Daniels) is a subdued man in “First Thing We Do, Let’s Kill All the Lawyers.” Although he is fired up and passionate when dubbing the Tea Party ‘The American Taliban,’ he now must pay the price for doing so, namely, being pulled off of the network’s 9/11 tenth anniversary coverage. He deals with this by drinking and smoking and becoming a wimp on-air again.

While it is absolutely in keeping with his character to go back and forth between fearless crusader and appeasing ratings-whore, one must wonder how long the see-saw can continue. Will’s spirits are already bolstered multiple times in the first year alone, and it would suck if none of those efforts have lasting effects, always returning him to the same sad state in their aftermath. Will must find a way to break this cycle, committing to the persona he wants most.

It is my opinion that the way for him to do this is to be with Mackenzie McHale (Emily Mortimer). She still doesn’t know what is in the voice mail Will leaves her while high, but it’s obvious that she is sensing his anger towards her cooling, and is intending to reform as much of a bond with him as he will let her. She calls him in the middle of the night, and shares a drink with him at the bar. It can’t possibly be much longer before they are a couple again, and in that relationship, Will might finally stabilize.

Though where is Lonny (Terry Crews) during this installment? Why do we not see him guarding Will in the bar? Hopefully, Lonny’s absence is temporary, just an oversight caused by not needing the actor enough to warrant an appearance in this particular episode.

In keeping on the romantic track, Jim (John Gallagher Jr.) is unwilling to be friends with Maggie (Alison Pill) after she chooses to move in with Don (Thomas Sadoski), and so takes an assignment following the Romney campaign, where he is shunned for Will’s Taliban comment. This doesn’t seem like the environment where wounded Jim can heal, certainly not a comforting, supporting one, but maybe concentrating on work is what he needs. And if he finds victory in reporting the story, that could help. Running may seem cowardly to some, but Maggie has made her choice, so it’s understandable why Jim would find it hard to be around her, and perhaps he’s wise to get himself out of that environment.

Except, Jim may actually still have a chance with Maggie, as Don finds a YouTube video of her rant about Jim, and promptly decides they are over as a couple. I am very dissatisfied with this quick evaporation of their romance. Don and Maggie have plenty of ups and downs, but two weeks is all they can make it? Maggie chooses Don; that should count for something. And it seemed so fresh and realistic that Jim and Maggie weren’t going to ever be together because Maggie would be with Don, no matter what viewers thought should happen, and this has been ruined. Though, Maggie clearly won’t just have a happy ending with Jim, given her appearance in future scenes, which I’ll get to shortly.

This does leave open the possibility of a Don / Sloan (Olivia Munn) pairing now. Things are plenty awkward between the two, since Sloan confesses her feelings for him, even though Don isn’t holding it over her in any way. But now that he’s single, maybe after a short, respectful pause, he may pursue Sloan, thus solving at least one rocky dynamic in the workplace. Although is Don gets with Sloan too quickly, that could screw up Maggie even more.

Because of Jim’s absence, a producer out of Washington D.C., Jerry Dantana (Hamish Linklater, The New Adventures of Old Christine), is tapped to fill in for him. Jerry is immediately a hindrance, vaguely appearing to be a team player, but also having his own ambitions. We don’t know all of the details yet, but Jerry and the guest that he brings onto a panel will definitely set off a huge mistake involving Genoa.

Genoa is a secret military that has landed the staff in very hot water, as evidenced by the fourteen-months-later framing scenes in “First Thing We Do, Let’s Kill All the Lawyers” in which Will, Mackenzie, and Maggie are seen with a team of lawyers led by Rebecca Halliday (Marcia Gay Harden, Damages). Our beloved characters are in trouble after a string of unfortunate events, one of which leads Maggie to Africa and a terrible hair cut and coloring. Bringing in Jerry is a huge mistake they will all regret. Too bad, he seems so nice-ish.

I’m a little tired of television shows doing the flashback to death. THE NEWSROOM is only the latest in a long line of series using that technique lately, and it’s been being done way too often. I’d rather see the Genoa disaster unfold slowly, not realizing that there’s trouble until it’s too late, like the characters do, rather than getting a puzzle piece by piece. I know this trope can be implemented effectively when done right, and THE NEWSROOM is brilliantly written, but in this case, I feel it is a big, easily avoidable misstep.

There are two smaller plots unfolding, too, that may have some big impact. In the first, Neal (Dev Patel) gets involved with Occupy Wall Street. For Neal, this story is both a far-out, unlikely movement, and something playing to his prowess with social media, so it straddles the two interests we’ve known him to have. Those who remember the protests know that they get lots of attention for a short time, but don’t go anywhere, so this is both an opportunity for Neal, professionally, and another dead end for him to pursue, the perfect plot for the character.

In the second, Charlie (Sam Waterson) chooses to pull Will off of the 9/11 special. This is something very uncharacteristic, in that he chooses to bench Will with nearly zero pressure from Leona (Jane Fonda) and Reese (Chris Messina) to do so. Weird; Charlie always defends Will. Did Reese getting kicked out of SOPA scare Charlie that much? It doesn’t seem like it should, in keeping with Charlie’s established personality. I wonder what’s going on there?

THE NEWSROOM is a fantastic series that deftly balances character-driven drama with real-world events and a commentary on the state of journalism. It takes the big stories we’re familiar with, and makes them personal to people we watch on screen and care about. There are a number of new arcs introduced in this season premiere which promise a great season, even if the episode itself lacks any of the stellar, inspiring moments that were a hallmark of the first year. Once we get past the weird flashbacks, I think that will sort itself out.

THE NEWSROOM airs Sundays at 10 p.m. ET on HBO.