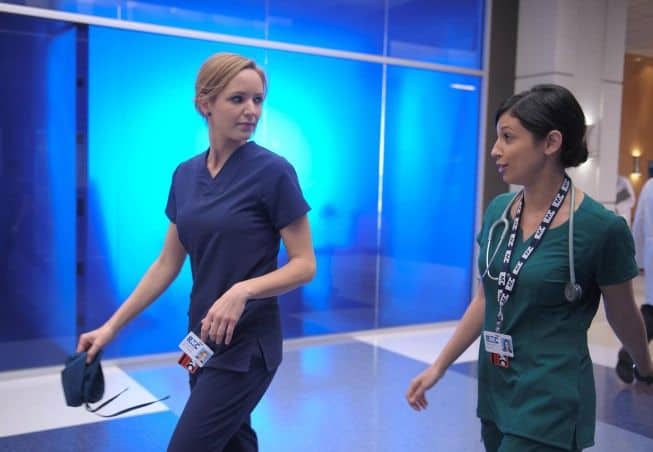 FOX has a new drama called THE MOB DOCTOR. Starring Jordana Spiro (My Boys) as Grace Devlin, a promising young surgeon who agrees to do work for the mob to pay off her brother, Danny’s (Jesse Lee Soffer, As the World Turns), debt, the series finds the protagonist bouncing between two worlds. In one, she has a bright career ahead of her and a wonderful boyfriend, Dr. Brett Robinson (Zach Gilford, Friday Night Lights, Off the Map). In the other, she pulls screwdrivers out of heads in the back room at a veterinary clinic.

As the “Pilot” begins, it almost looks like Grace enjoys the double life. She handles a thug with ease, not cruel, but not flappable, either. We learn that she grew up around criminals, and one of her earliest memories is finding a dead body. This sets the stage for a main character of questionable morals, something that does very well on cable, but is rarely seen successfully done on broadcast TV.

But as the hour plays out, it soon becomes apparent that Grace is not a common criminal. She is helping out her family, making her the kind of bright and shiny hero that populates many a series. This actually makes her a bit less interesting, as now we assume that she will always do the right thing. After all, her involvement in this mess of a situation is just stemming from loyal to her family, not out of a desire to do wrong or protect guys that should be behind bars. Should the writing stray from such a predictable formula, it would be neat and fresh. As it stands, Grace may quickly become rote and boring.

What gives me hope is Spiro herself. Her excellent work on her previous sitcom starring role over several years proved and honed her comedy chops. She dipped her toe into light drama with a recurring role on Harry’s Law more recently. Now, with THE MOB DOCTOR, she is given more to work with than ever, and the entire hour seems to hang on her, since she is in every scene. Spiro doesn’t flinch, and stays compelling through it all.

Another positive element is the writing. It’s hard to tell in which direction the series intends to go from just the “Pilot” because it is mostly setting things up. But there is no obvious patient of the week, with Grace treating several people throughout. And because the show is on FOX, not CBS, it may very well be allowed to explore large arcs, rather than being stuck in a formula. Or, if it does follow a weekly pattern, it may get to depart from that more than many other shows.

Spiro is surrounded by a talented, proven cast. Besides Gilford, there’s Zeljko Ivanek (The Event, Damages) as the hospital boss, William Forsythe (Boardwalk Empire, The Rock) playing the counterpart man in charge, James Carpinello (Rock of Ages), Floriana Lima (Poor Paul), Wendy Makkena (Sister Act, Listen Up), and Jaime Lee Kirchner (Mercy). This means that, if the writers decide not to make Spiro carry the show by herself, which they should, despite her talent, there is an already-built support system in place to sustain a quality series.

I don’t want to give away the ending of episode one, but suffice it to say, the balance of power is not established until the very last minutes of the episode. It makes it a little hard to talk about what to expect, going forward. A lot of the “Pilot” does a fine job establishing the characters and the setting, but it’s hard to say what kind of series THE MOB BOSS wants to be until we see how things play out past this first installment.

Another thing that happens very late is telling about Grace herself, painting some of her attitudes and actions in a different light. As a character, she does a handful of things that didn’t quite add up to me until that revelation. Had the twist been missing, it’s likely this would be a very different review.