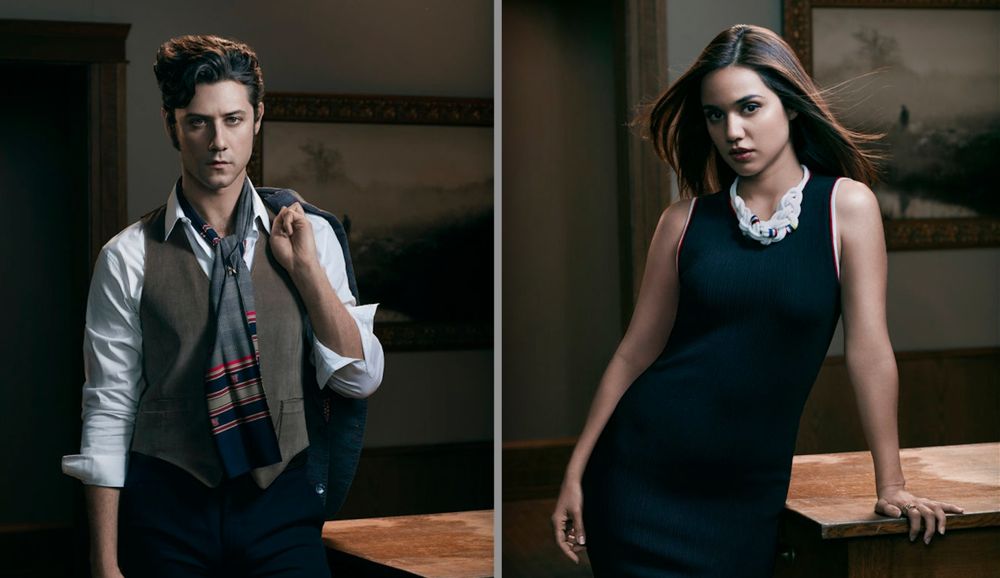 In the world of Syfy’s new fantasy series THE MAGICIANS, there are those blessed with magic and those who will attain magic by any means necessary.  Two of the characters born with and blessed with magical abilities are Eliot (Hale Appleman) and Margo (Summer Bishil), and they quickly befriend a newcomer to Brakebills College by the name of Quentin (Jason Ralph).  Each was been recruited at one time or another to join the prestigious college of magic.  Unfortunately, Quentin’s friend Julia (Stella Maeve) was found to be lacking in the requisite magic and rejected.  It leads Quentin and Julia on parallel paths into the dark arts.  The good news for Quentin is that his friends Eliot and Margo have his back; Julia, on the other hand, is not so protected.

In an exclusive interview, stars  Hale Appleman and Summer Bishil talk about their characters Eliot and Margo and how they fit into the Brakesbills College world and the extraordinary journey they embark upon with Quentin.

How would you describe your characters?
HALE:  My character Eliot is kind of the unofficial prince of Brakebills College.  He’s constructing this very sophisticated, polished, dandy persona that he is projecting out into the world and he wants everyone to believe that he has it all together and is very confident.  But he is also hiding a lot of vulnerability and fear and shame from his past and where he came from and a kind of darkness that he has escaped.  So you get a sense that he has come through a lot already, and he is the first magical creature that Quentin comes across.
SUMMER:  I play Margo in the show, but the character’s name was Janet in the books.  Margo is a lot similar to Eliot and that is why they are so drawn to each other.  They are not what they seem.  There is much more to them. They are more layered and nuanced than you would expect.

The relationship between Eliot and Margo seems very close initially.  Have they gone through a trial by fire together?  What made them so close?
HALE:  They are.  Absolutely.  And you could say that.  There is definitely a test that has brought them together.
SUMMER:  Quite literally a trial by fire.
HALE:  You’ll see what we mean by that as the series goes on. But they have definitely been brought together.

Why did they decide to pick out Quentin as like their guy?
SUMMER: I think Margo finds Quentin interesting because of the way he sees the world.  He sees it as romantic still and I think Margo wants to be able to see things that way, but doesn’t and wants to understand how to and maybe be close to somebody who does at times — but also who is repelled by it.
HALE:  Eliot sees a lot of himself in Quentin.  But that is not something he would readily admit.  He sees Quentin exterior in a way mirrors how Eliot feels on the inside.  All of those anxieties and all of those fears and how that manifests itself.   Eliot shares that with Quentin, but doesn’t want Quentin to know that and it is a bit of a cover that Eliot is taking.  Eliot has also been where Quentin is — he is sort of taken into this magical world of the Brakebills graduate school and that bubble.  Eliot also escaped from his past — not entering it in the same way or for the same reasons — but they do share that.  So I think Eliot can relate to that experience.   They are meant to be friends.

Brakebills College does not seem like it is merely educating them about magic, it is preparing its students for battle and acts more like a training ground for them.  So how quickly will we see them in battle?
HALE:  The school trains them for all sorts of things. The adventure and battle aspect is something that they sort of realize that they have to take on themselves and develop in order to survive.  Survival is actually a huge theme of the show.  All of these characters are escaping from some sort of reality that they need to escape and they need to survive, and they come to this place where they are met with more challenges and they have to learn to survive all over again.

Another magician hovering around their circle is Alice (Olivia Dudley).  Why is she the outsider?  Why didn’t she become part of Hale and Summer’s group right away?
HALE:  She’s a threat because she is so talented.  She comes from a magical family and that is something for anyone who doesn’t, that is something they envy — certainly for Eliot and probably for Margo.
SUMMER:  Definitely, though Margo also respects her.

What level would you say that your characters are at with their magical abilities?
SUMMER:  Margo believes that she is fairly developed as a magician and skilled.  That’s why Alice’s presence first intrigues her and threatens her.  But eventually Margo grows to respect her because of her natural talent.  But until she is confronted with Alice’s presence, Margo believes that she is one of the best.
HALE:  Eliot is one of the most naturally skilled, without having to try, magicians.  There’s something very off-the-cuff and magic comes easily to him.  He doesn’t study really hard.  There is a natural brilliance to his mind and the way he accumulates power.  Then certain life events take him by surprise and he levels up his magical abilities through certain, devastating events.  That’s also a theme that recurs throughout the season for all the characters.

What was one of the funnest magical abilities that you got to portray on the show?
HALE:  I can’t tell you! It’s too big of a spoiler.
SUMMER:  I like when we do real practical-effects on the sets, like explosions or there is a fire that we are creating with out hands and the prop guys are making the fire happen.  That feels cool.  It makes you feel powerful.

The other interesting thing your series does is that it introduces the alternate story of Julia as she pursues the darker path.  How quickly will her story entangle with what is going on at Brakebills?
HALE:  You’ll see it right away.
SUMMER:  She does parallel their story and I think it is fantastic that the show did that.  I think Julia’s story does drive in a very compelling way.

When your characters meet Julia, do they even have a sense that she is a threat?
HALE:  At first, Eliot probably writes her off, and then we will see.
SUMMER:  Margo kinds of likes Julia.  She kind of regards her like a cool chick and respects her from the get-go. I like that when Margo meets Julia that Margo does not censor herself and Julia doesn’t censor herself.  They kind of say what is on their mind and they stay out of each other’s way and respect each other.

The show also introduces a dream-world or alternate reality kind of world the Quentin goes into.  How quickly will the show delve into that?  Is that a world your characters get to play in?
HALE:  In a way, but not immediately.

The Beast comes in fairly quickly and challenges them right away and they do not seem as prepared as they should be.
SUMMER:  They are not because I don’t think they believe there will be fatal consequences.  They see it as a fun and playful thing that they are learning.
HALE:  It’s the childhood ideal of escaping into this world of magic and everything working out and having a happily-ever-after is something that the series turns on its head.  Things are not that perfect and that glossy and you do see cracks beneath the veneer and the hard knocks of life that all these characters have to go through.

When the audience first meets the Beast, it is terrifying.  What was it like to film those scenes for you?
SUMMER:  The actor is really good at his job.  He’s intimidating and he is a force of nature.
HALE:  He’s very natural and believable.
SUMMER:  You feel his presence when he walks into the room.  So that helped, and it should feel terrifying ’cause it shakes these characters up enough to put their differences aside and come together to figure out how to fight him. It’s a huge wake-up call for Margo.
HALE:  There’s a lot of wake-up calls. We all have them at different points. There’s a real shift that happened for each of us.

To see just how dark and thorny the path becomes for all the budding magicians and if they can defeat the Beast, be sure to tune in for the 2-hour premiere of THE MAGICIANS on Monday, January 25th at 9:00 p.m. on Syfy.