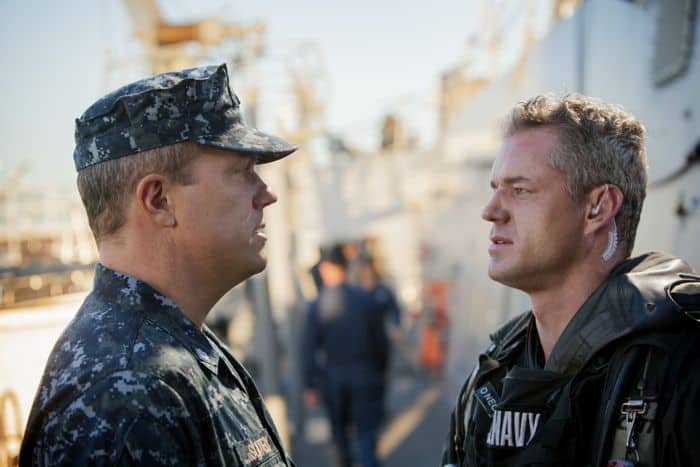 TNT’s new summer ‘blockbuster’-style series is THE LAST SHIP, which premiered last night. In the pilot, “Phase Six,” the USS Nathan James, an advanced naval destroyer, is sent up to the Artic on a very secretive four-month mission. Unfortunately, at the conclusion of their tenure, they find a world racked with plague, most of the population dead or dying. Untouched thus far, and with a scientist on board who might be able to make a cure, the captain decides to remain isolated while they try to save the world.

The beginning of THE LAST SHIP is extremely obtuse. It’s a full third of the way through the initial hour before anything that is going on is revealed. This is frustrating to the captain, Tom Chandler (Eric Dane, Grey’s Anatomy, Marley & Me), but it’s equally frustrating to the viewer. Don’t get me wrong, I’m glad “Phase Six” doesn’t follow a cookie cutter set up with predictable turns, but it’s also annoying when it seems like the earlier scenes don’t mean a lot, not even really introducing the characters much, just giving us unimportant elements that don’t fit together yet.

Once the action starts, though, THE LAST SHIP gets pretty good. The situation is certainly compelling, a bastion of hope in a dying world, a team of noble heroes doing their best against impossible odds. The ship itself is well-designed and visually impressive, and the action scenes are exciting, even if the Nathan James doesn’t seem to show damage afterwards. It’s absolutely a popcorn series, but it succeeds in telling a large-scale structure with high stakes.

The cast is well-stocked. Dane is terrific as the reluctant commander, angry at the position he’s placed in, but accepting of his fate and determined to do his duty. Adam Baldwin (Chuck, Firefly) makes a solid XO, Mike Slattery, whom will be at odds with Chandler, even as the two men understand one another. Rhona Mitra (Boston Legal, Strike Back) plays tough scientist Rachel Scott, who is protective of her work, and much more concerned about the greater good than any individual or crew of individuals. This central trio is one that could find their dynamics shifting, and will be a good group of headliners.

They are joined by a capable, if lesser known, batch of supporting players including Travis Van Winkle (Hart of Dixie), Marissa Neitling (Leverage), Charles Parnell (All My Children), Christina Elmore, and Jocko Sims (Crash). These people basically provide fodder to kill off and soapy stuff to keep the drama going in between battles at sea and helicopter chases. They do that in a serviceable fashion, though none stand out as being vital to the project at this juncture.

THE LAST SHIP, like the types of films it emulates, is drama-light. It’s good at getting the adrenaline coursing and making the audience feel tense, but won’t be something that can really be emotionally invested in, nor will the characters be the stuff that Emmys are won on. While most post-apocalyptic TV fare go the deeper route, there’s nothing wrong with being more flashy every once in awhile, and THE LAST SHIP seems to fit into what many people crave in the summer months, and so should fill a gap that not much else on television is currently filling.

For this reason, despite its weaknesses, I like THE LAST SHIP. It’s got the bones of a superior project, but is different enough from its peers to drown in comparisons. It definitely has a budget worthy of what it is trying to achieve, by TV standards, and while a few plot holes and far-too-easy coincidences pop out, it isn’t riddled with them so much that it becomes distracting, and some are necessary just to get the series going in the way it’s built, not likely to repeat later. I found it mostly an enjoyable, entertaining experience, once it got going.

THE LAST SHIP airs Sundays at 9 p.m. ET on TNT.